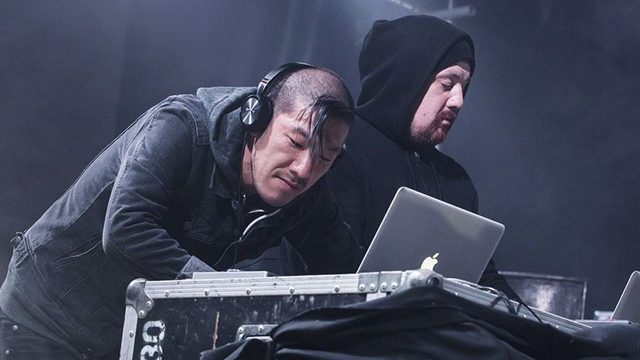 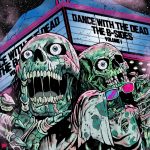 If you have never danced with the dead, you need to get up yourself over to the graveyard now. Don’t forget your tape deck. Music will be your only protection. Not even your crucifix can save you now…

If you don’t know who Dance With the Dead are, I suggest you wake yourself up now. The musical duo from Orange County, California have been raising the dead since 2013, with the release of their debut album, Out of Body. Since then their unique blend of dark synthwave and heavy metal has been tearing up dance floors/graveyards worldwide.

“If you haven’t checked out our B-Sides record yet, DO IT! Tons of music that never made it onto our records!” – Dance With the Dead

After just two spins, B​-​Sides: Volume 1 has easily become my favorite Dance With the Dead record; a collection of grade-A, zombie killing material that has been expertly blended into a cohesive whole.

B​-​Sides transcends its own title; which is in my opinion, B​-​Sides only flaw. Each track may have existed as a B-side at one point in time, but don’t be blinded by the title. Dance with the Dead’s diabolical melodies will have you dancing until flesh is removed from bone.

Influenced by 1980s horror, Dance With the Dead sets the tone for the rest of B​-​Sides: Volume 1 with the first track ‘Get Out’; a sonic injection of aggressive electronic thrash metal. Next in line is ‘Banshee’, an assault on the senses; pounding on your skull before your face melts off during the guitar solo. Remember, we are only on track 2…

‘That House’ continues to experiment with tempo variety, combining synthesizer with electric guitar seamlessly, before ‘Stoic’ slows everything down, layering vocals atop a synthwave melody that wouldn’t look out of place in a Lamberto Bava flick. Then begins ‘The Man Who Made a Monster’, a track previously released on the Lazerdiscs Records’ ‘Future Dark Club Vol. 1‘ compilation. ‘The Man Who Made a Monster’ could be one of the greatest dark synthwaves tracks recorded this decade…and Dance With the Dead have strong competition from the likes of Power Glove and the orgasmic Perturbator.

‘The Awakening’, ‘Tales from the Boneyard’, ‘Entity’ and ‘Blood Moon’ (another standout track) continue to evoke a retrofuturistic perspective from their listeners. Close your eyes and you can certainly imagine yourself walking down the neon-soaked streets of dystopian Los Angeles; à la Blade Runner. B​-​Sides: Volume 1; a record birthed from 1980s culture, nurtured to dominate the dancefoor.

‘Surrender’ once again slows down the pace before hitting us with ‘Venom’; an auditory onslaught that is continued with tracks ‘Snap’, ‘Tilt World’ and ‘Skeletons in the Attic’. ‘They Only Come Out at Night’ closes the record, proving that Dance With the Dead are masters of their witchcraft. ‘Monster’ Mark Kosobucki lends his fiendish talent to the album cover, which only further solidifies my admiration for B​-​Sides: Volume 1. If these tracks are considered the B-sides, I have no doubt in my mind that Dance With the Dead will reach world domination with their future releases. Keep on raving from the grave!