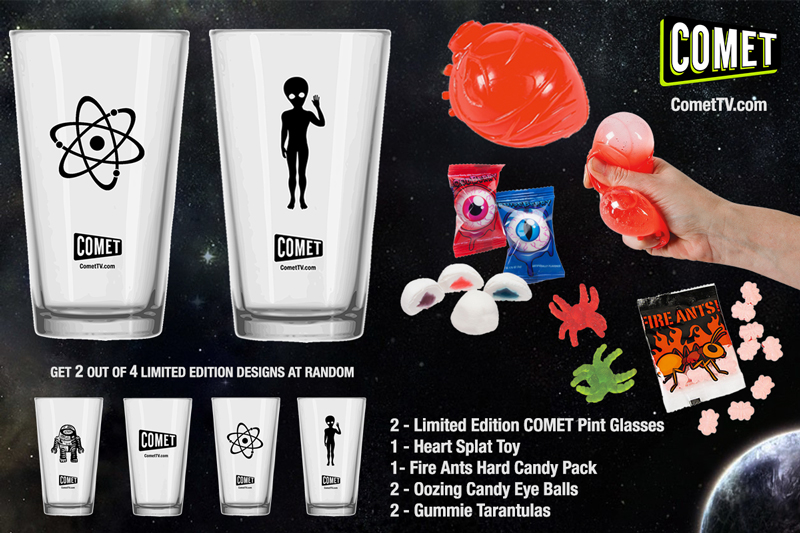 Beware the full moon this month! Grab your silver bullets and wooden stakes as there are enough beasts on Comet TV to send a shiver down your spine! Whether it is 1980s classics Teen Wolf and Teen Wolf Too, or the out of this world Species and Strange Invaders CometTV.com, the newest and obviously coolest Sci-Fi TV Network has got your back! Don’t be scared… These beasts aren’t coming to get YOU… You’re coming to get THEM!

What?! Is that a werewolf bite?! Well if you can’t beat your inner-beast, having a drink from a limited edition Comet TV pint glass will soothe even the darkest soul. Attack from Planet B have teamed up with Comet to defeat the ‘Beasts of February’ and giveaway some horrifyingly awesome goodies that will get you in the beast-like spirit! EEEK!

Please let us know what your favorite Teen Wolf (or Teen Wolf Too) quote is in the comment section below, and you will automatically be entered into the giveaway. Good luck!

The winner will be announced on Tuesday 7th March 2017 and notified via email shortly afterwards.

This giveaway is open to US residents only; one entrant per mailing address. Deadline to enter is midnight (00:00 GMT) March 5, 2017. The winner will be notified by email on March 7, 2017 and must respond within 48 hours to claim their prize. No P.O. Boxes please. The prize will be sent via either FedEx or USPS. The email address we will use to contact you will be the one registered to your Disqus account. The winner will be subject to eligibility verification. If you have won the same prize on another website, you will not be eligible to win again. Both Attack from Planet B and Comet have the right to remove entries if any of the above terms and conditions have not been followed.

Listed below is featured content airing on Comet TV; part of their ‘Beasts of February’ schedule. For further updates regarding the schedule please visit CometTV.com

Entry to the competition has now closed. Congratulations to 1froglegs. We hope you enjoy an ice cold beer in your new Comet TV pint glasses.