aka Cathedral of Demons, Demons 3: The Church

Indeed The Church was originally conceived as Demons 3, but upon Soavi’s insistence the film stands alone. For those of you who intend to purchase the new release from Shameless Screen Entertainment, and have not yet seen the Dèmoni series, The Church has no direct thematic link to either Demons (1985) or Demons 2 (1986). Yet, if you have seen the Dèmoni series you’ll find plenty to enjoy in The Church.

In medieval Germany, a entire village is accused of witchcraft and attacked by a band of Teutonic Knights, when a cross-shaped stigmata is discovered on the foot of a young girl. One by one the villagers are slain; their now lifeless bodies thrown into a mass grave ready, branded by a large black cross. Not intent on just the massacre of a entire village, the Teutonic Knights arrange for a church to be erected over the grave of dead heretics.

The titular structure still stands in the present day, and has appointed Evan (Tomas Arana – The Sect) as their new librarian. Deep in the catacombs of the church, archaeologist Lisa (Barbara Cupisti – StageFright) discovers a torn parchment within the walls of the crypt, which she shares with Evan; one that could provide answers to what lies buried beneath…

“Things stolen from the Holy Land. Treasures. Or maybe the key to an unknown science we’ve lost all trace of. Something that could turn the finder into a superman. A god.”

Eventually Evan’s curiosity leads him into the crypt alone. The outline of a large cross is embedded into the stone flooring; a stone seal with seven eyes fixed at its center. Breaking the crypt’s seal, Evan unwittingly releasing the evil that has dwelled beneath for hundreds of years. At the same time an automated mechanism within the church is triggered, causing the doors to close and trap everyone inside… 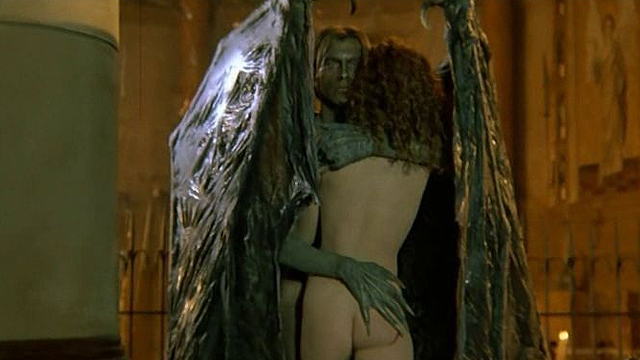 This is where the influence of Dèmoni can be felt most – a group of people trapped with no perceivable way out – as gradually, each individual is forcibly removed from the equation. Michele Soavi weaves a plethora of Gothic horror set pieces into the narrative, frequently shifting genre conventions. The gore is restrained but effective, with genuine moments of brilliance that often mimic religious iconography and contemporary art. One such scene recreates Boris Vallejo’s 1979 painting of a vampire (often mistaken for a devil) embracing a naked girl, entitled ‘Vampire’s Kiss‘.

And yet, at the same time, these frequent shifts in tone result in a movie that is inconsistent throughout. The Church was taken over by Michele Soavi shortly after Lamberto Bava (A Blade in the Dark) left the project due to a fallout with producer Dario Argento. Soavi then began rewriting the script, removing direct references to the existing Demoni mythology, but keeping many of the ideas Lamberto Bava, Fabrizio Bava, Dardano Sacchetti, Franco Ferrini and Dario Argento had contributed. Do you see where I’m going with this? Far too many plot directions weigh down the proceedings leaving you, The Church’s congregation, satisfied visually, but perplexed as to where the narrative is headed. 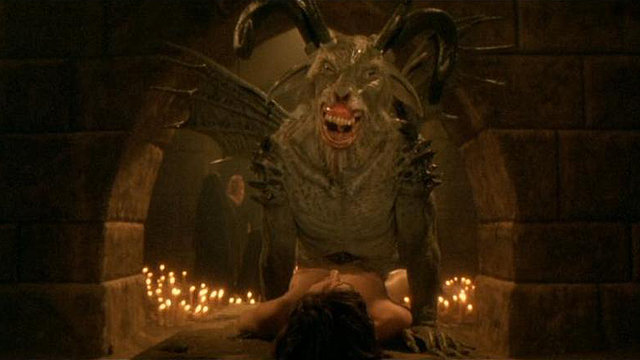 With that said, although the script may be conflicted, The Church combines a genuinely unsettling atmosphere with a haunting soundtrack from the combined talents of Keith Emerson, Philip Glass and Goblin (a mainstay of Italian progressive rock) to create an enjoyable, if somewhat muddled experience.

Shameless’ presentation of The Church is worthy of the title ‘Shameless Fan Edition‘. Along with the reversible sleeve (with newly commissioned artwork by Richard Wells) and signature yell’o case, The Church has been transferred from the original negative, marking this 2K restoration the most complete of any previous release at 102 minutes. The pristine, widescreen (1:666!) transfer is accompanied with two stereo PCM 2.0 audio tracks; English and Italian, with English subtitles. 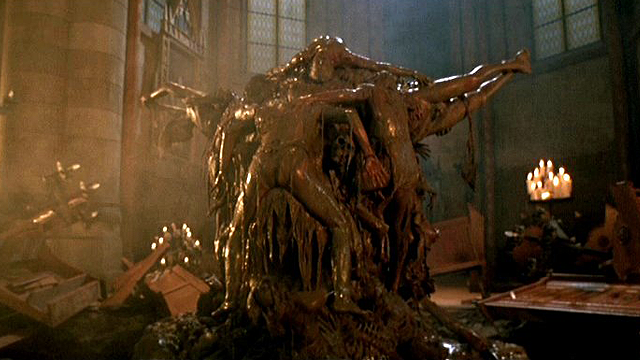 But it was the interview with Michele Soavi, entitled Cathedral of Fear, that really captivated me. At 25 minutes long, Soavi discusses the various problems he had, along with the creative freedom bestowed upon him, during production of The Church.

Think of The Church as a stepping stone for Michele Soavi, toward his underrated masterpiece Dellamorte Dellamore (1994); aka Cemetery Man. The Church doesn’t reach the same heights as the aforementioned comedy horror, but does show off Soavi’s skill as both a visual artist and unpredictable storyteller. If you are a newcomer to Soavi’s work, I would approach The Church with caution, but for veterans of the Italian director’s horror output, the Shameless disc is a worthy addition to your collection.

Michele Soavi’s The Church is available now on both DVD and Blu-ray from Shameless Screen Entertainment. Release date: 31 October 2016