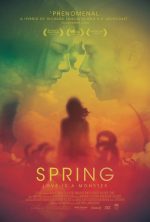 The most accomplished horror filmmakers aren’t really interested in delivering easy shocks or jump scares. What they try to do is chip away at the layers of defence we have created in order to protect our delicate psyches. To do this, they often try to tap into our most primal fears – conscious and unconscious. I will elaborate later on what these seem to be in the case of Spring. On first impression, Spring appears to be a form of ‘boy-meets-girl’ story, but the seemingly simple plot delves deeper into the impulses of love and commitment than the usual Hollywood product.

In Spring, a young, earnest American, Evan (Thumbsucker star Lou Taylor Pucci) drops out of college to take care of his ailing mother. When his mother dies, he takes refuge with a slacker friend in a bar and gets into a nasty fight which loses him his dead-end job and has the police looking for him in order to press assault charges. Using his inherited cash, Evan impulsively books a flight to Rome, falls in with some well-meaning but obnoxious British louts and meanders off with them to an idyllic Italian village on the Mediterranean coast.

There Evan stumbles across Louise (Nadia Hilker) a beautiful and mysterious young woman who immediately invites him to her bed. As she resists his offer for a more conventional preliminary date, he gauchely mistakes her for a prostitute and in response she teases him and flounces off, leaving him confused but intrigued. 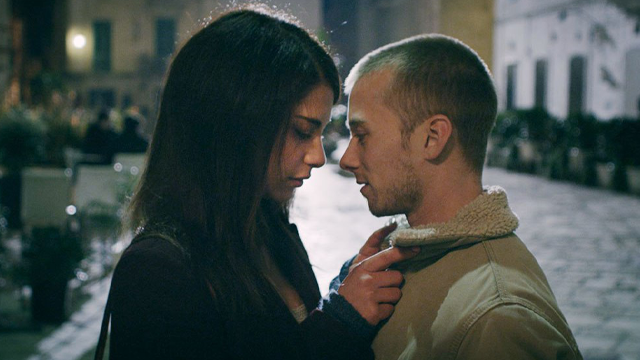 His annoying male companions move on elsewhere, but Evan stays, taking a live-in job working with a benevolently eccentric farmer Angelo (Francesco Carnelutti). We are treated to dreamy, heavily saturated cinematography of the picturesque Mediterranean coastal village and the lush Italian countryside and a lulling trance score from Jimmy Lavalle. The hypnotic tone casts a spell over us just as Louise casts hers over Evan, and the leisurely first hour of the movie echoes Evan’s rambling journey. But soon Spring starts to drift into darker territory with a looming awareness of impending danger. Flowers bloom at weird times, slugs collect at people’s doorsteps, animals and people are mutilated and Louise has a supply of filled syringes that she anxiously administers to herself to alleviate an alarming skin condition.

The process of discovery that Evan goes through to get closer to Louise refreshingly addresses his confusion and persistence against her standoffishness. Louise’s motives are clarified later, but Evan eventually wears down her defences, and the two begin a hot-and-cold romance. Her vacillation perplexes Evan as he tries to deal with the threat of this relationship being terminated before it has a chance to turn into something real. He senses a genuine, if grudging attraction between them. Their dynamic is interesting – their respective quirks make them natural foils: he’s an earnest but disillusioned young man, embittered by his recent experiences and needing a connection, and she’s a disarmingly outspoken, playful, smart, but ultimately distant femme-fatale. Both characters resist their limitations, which makes for awkward, but more natural conversations, and their dialogue rarely ventures into the clichéd artifice of conventional romantic movies. When the relationship begins to get more intense, Louise suddenly breaks up with him. Hoping to get some kind of explanation, Evan arrives unexpectedly at her apartment and stumbles across her shocking secret. 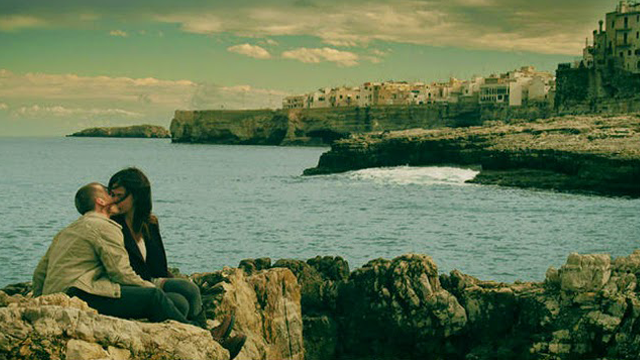 The explanation for what’s actually happening is rather wildly elaborate. Justin Benson, (who directed but also wrote the script) has invented an intriguing mythology for this female creature that involves pregnancy, rebirth and genetics. Louise is a student of genetics and biology and declares herself to be an ancient abnormality, that science has yet to explain, able to regenerate from the stem-cells produced by pregnancy. So, she is a creature whose existence is unexplained and therefore does not require any further origin story. But it does leave the couple with a bit of a problem. This is where the movie takes an interesting turn.

To return to the matter of primal fears that I touched upon in my opening paragraph – Louise seems to be a form of the ‘Archaic female’ – the ancient myth of a generative, parthenogenetic mother Rodger Dadoun describes as “…a maternal thing situated on this side of good and evil, on this side of all organized form – a totalizing oceanic mother – a mysterious and profound unity arousing in a subject the anguish of fusion and dissolution.” She turns up in horror movies, every now and again, but this kind of self-determining female creature is usually represented as a monster, always in the negative sense, in order to play on male fears of the female body, the mysterious generative ability of the womb, and of the female engulfing, killing or abandoning her mate after using him.

What makes Spring extraordinary however, is that instead of running away screaming, intent on finding a less troublesome partner, Evan decides to stay and talk it over. The horror elements in this movie, original though they are, serve mostly as a metaphor for the perils of intimacy. Disturbing as it is, Louise’s situation is acknowledged by Evan – he wants to understand. Spring offers us a departure from genre conventions, as the acceptance of physical and emotional imperfection, and the need to give something of oneself up, becomes the thrust of the movie. In this atmosphere of non-judgmental acceptance, the horror aspects take on a poignancy as the two try to work out how to deal with their unique problem. 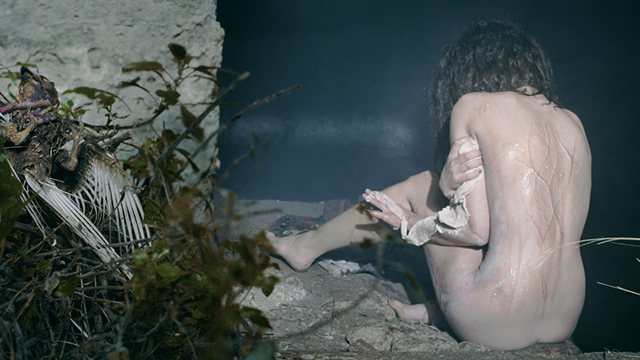 The story itself may push our boundaries of believability, but it succeeds because of the chemistry and likability of the two leads. The actors get a chance to create a realistic relationship. (Hilker is especially remarkable for managing to ground what could have been a role which stretched our credibility.) Conversations touch on subjects that are pertinent and deal with relationship fears—of women and death on Evan’s side, of intimacy and commitment on Louise’s, and indicate how people can often sabotage relationships rather than reveal the worst part of themselves to someone else.

Justin Benson’s screenplay examines this phenomenon in a way that shows unusual honesty and we witness the evolution (no pun intended) of a relationship whose conclusion isn’t necessarily logical or predictable. In fact, Spring seems rather to celebrate the impulse to connect with a soulmate, no matter how frightening, unpredictable or dangerous that might be. Evan undergoes a kind of metamorphosis himself, not as dramatic as Louise’s, but radical in its own way. Louise herself has to contend with the idea of giving up something fundamental in her nature that makes her unique.

To achieve this end Spring plays with horror tropes, using familiar conventions merely as a starting point, but ultimately creating something that is uniquely its own – an achievement rare in movies generally, but even moreso in the genres of horror or romance.