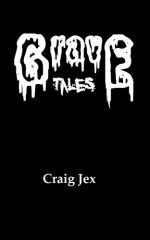 Grave Tales is a collection of eight short stories by Craig Jex, writer of the exploitative, EC Comic styled Brutal Bombshells. Written over a period of twelve years each short story is drenched in sticky crimson red, bookended with two highly exploitative tales of terror.

The collection begins with a short foreword entitled Tribute, which provides an insight into Jex’s early inspirations and concludes with a heartfelt dedication to the memory of Wes Craven (A Nightmare on Elm Street, Shocker). Wes Craven and his exceptional directional efforts are referenced throughout Grave Tales, whether it be with A Nightmare on Elm Street playing on TV in Mummy’s Girl or the street name of ‘Craven Avenue’ in Gypsy’s Kiss. But these grave tales are hardly derivative of Craven’s contributions to horror cinema.

Jex’s first short story entitled The Grave sets the tone for the rest of this delightful collection. It is second only to Gypsy’s Kiss in it’s exploitative nature, exposing readers to a pulp tale of Melvin Baxter and his pathological fascination with necrophilia.

“Thank God for a quick funeral…he had never done anything like this before, even with a live member of the opposite sex.”

Following The Grave (which Craig Jex released for free on his own blog) is the The Beach; a much more refrained affair that I could see work as an episode of a modern day Tales from the Darkside. This is not to say that The Beach iStoriess any less horrific that it’s predecessor. If anything, the family orientated nature of this tale make it all the more terrifying!

Pecking Order, on the other hand, is completely outrageous; and thus became my favorite grave tale from this collection! David Jones, despite his friend’s protest, aims his air rifle at a lone pigeon and fires, injuring the bird’s wing. David, as cruel as he is, fires another shot, taking amusement from the pigeon’s suffering. But what he doesn’t realise is that pigeons understand the concept of revenge!?

I spoke with Craig Jex prior to writing this review, where he shared that the next story in this collection was actually the first he had ever written. Mummy’s Girl is a solid effort, focusing upon postnatal depression and the mental effect it can have on a parent; when taken to the absolute extreme.

“I love you daddy but I’ll always be mummy’s girl.”

The voices are telling me that the next story, a recipe for self mutilation, will leave you disgusted, depressed and…possibly hungry? You Are What You Eat follows Anthony Richards; a novelist struggling to write a follow-up to his previous best-seller. So, rather than find inspiration around him, Anthony listens to the voices in his head and bakes an apple pie to die for.

Dead Tired is the shortest story in Grave Tales, which along with A Love Story, could have easily been plucked from an issue of The Vault of Horror by EC Comics. In Dead Tired we discover that sleepwalking is murder, whereas A Love Story further solidifies the fear of falling in our sleep, only to awaken to a sensation of sudden impact.

Finally Grave Tales concludes with Gypsy’s Kiss, it’s longest and most brutal story of mutilation, defecation and rape. Gypsy’s kiss is, after all, cockney rhyming slang for piss… Brendan Hughes and Stephen Thompson are walking home late one night after a concert and find themselves in an unfamiliar neighborhood. What they would see that night could never be unseen.

“If only we walked on the other side of the road. I wouldn’t have seen what was inside…”

In the introduction to Stephen King’s Night Shift, King wrote that a good horror story “holds the reader or listener spellbound for a little while, lost in a world that never was, never could be…” There was not one short story in Grave Tales where my attention was lost, and I’m easily distracted! That may be unique to me and my fascination with both horror fiction and it’s subgenres, but it also exemplifies that Grave Tales itself is not just a collection of similarly themed horror stories. It is a series of passionately written pulp fiction (and I don’t use that term derogatorily), each story unique from the other.

Grave Tales may be a short read at only 69 pages, but it is one collection that will grab you by the throat and won’t let go until your eyes burst from their sockets!