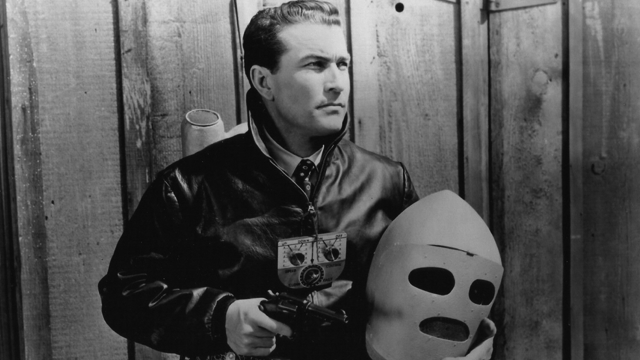 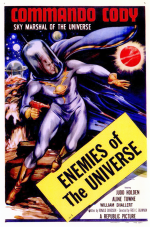 Masked hero dressed to the nines with gizmos galore? Check.

Twelve half-hour episodes of the aforementioned cheesiness, and more? Check.

From the look of it, 1953’s Commando Cody: Sky Marshal of the Universe fits all the criteria for the kind of vintage science fiction serial that kids went ga-ga for back in the day. Why, then, have so many disputed its status as such since the series first blasted off on the big screen? As it turns out, some circles don’t consider this to be a true serial, on the basis of it being intended for television distribution before the powers that be shipped it off to theaters instead. This, alongside the absence of those cliffhanger endings that enticed coonskin-capped kiddies to come back for the following week’s chapter, is more often than not what grinds a purist’s gears. But while folks can argue themselves hoarse over the finer details, Commando Cody more than earns its place amongst long-form sagas like The Phantom Creeps or The Invisible Monster, embodying the format’s most treasured tropes…and bearing the burden of its greatest shortcomings. 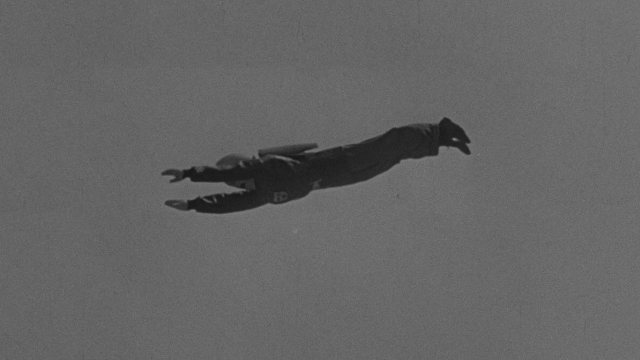 Earth is under attack by a fiend from beyond the stars. The Ruler (Gregory Gay), an intergalatic conqueror, has saddled up to our end of the cosmos and announced his intentions to take over. Fortunately, humanity has a good shot at surviving, thanks to the brains, brawn, and wicked jet-pack of one man: Commando Cody (Judd Holdren). A government-sponsored superhero who works in the utmost secrecy, Cody has thus far managed to fend off most of the Ruler’s assaults, by coating the planet’s atmosphere with a layer of protective dust. But driven by a Rita Repulsa-like determination, the Ruler ramps up his advances upon our world, going so far as to futz with our weather and sic robotic soldiers upon the populace. However, with his trusty associates by his side, Cody remains undeterred, putting his own life on the line and doing whatever he can to ensure that us earthlings never become a spaceman’s slaves.

If something about Commando Cody strikes you as particularly familiar, then it’s most likely the man’s very duds. Though the 1949 serial King of the Rocket Men used it first, Cody’s costume helped inform the design of Dave Stevens’ Rocketeer comics and the Nineties-stalgia darling the subsequent movie adaptation would become. The visual of Holdren soaring through the sky with arms outstretched alone is enough to get a Pavlovian rise out of superhero junkies, but the series does contain a couple other interesting touches of note. While it’ll forever remain a sticking point for some, the exclusion of the cliffhangers capping off each episode feels very refreshing. It does away with the narrative hang-ups that come with every successive chapter cheaply writing itself out of the previous one’s corner and only getting so much time to set up its own scenario before the cycle repeats. All of Commando Cody’s installments come off as complete adventures, and all make an effort to focus on a different challenge to be defeated. Whether the Ruler bombards the world with rays from makeshift suns or tries to incite germ warfare, there’s always something new to put our protagonist’s talents to the test. 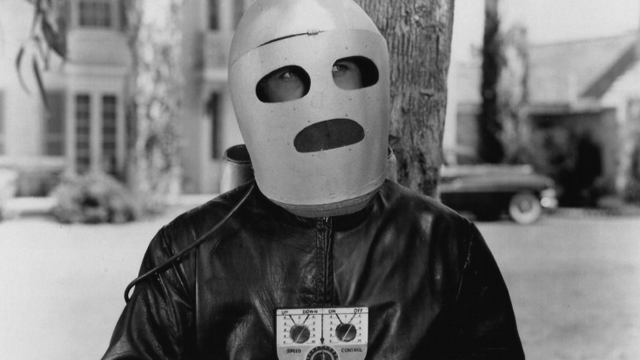 However, it doesn’t take very many episodes for Commando Cody’s samey structure to cause its storylines to do a nasty little number on one’s patience. Each of the twelve laboriously repeats a similar routine of the Ruler hatching his latest scheme, showing Cody and his team preparing to combat said threat, and having the two sides play proverbial tug-of-war until their thirty minutes are up. The story content is bare-bones to a fault, the pacing is unforgivably slow, and with this having come out during superhero cinema’s salad days, one can’t count on any deep characters or compelling subplots upon which to affix their attention. There’s no use turning to Holdren for an arresting performance, for while he might wear that jet-pack like a pro, good luck separating him from the throngs of other ’50s sci-fi stiffs trying to sell their sciencespeak with a straight face once he opens his mouth. Gay also doesn’t project much menace as the Ruler (although he does get to wear a pretty slick robe), but where the supporting cast is concerned, all hopes of coming across some appealing pluck aren’t lost. As one of Cody’s assistants, Richard Crane puts on an engagingly goofy show, and in addition to the actress herself turning in a likable performance, it’s great to see Aline Towne’s fellow scientist being treated as one of the team, with condescending sexism towards her character almost entirely absent.

Those who’ve long since made peace with the serial format’s faults will most likely have a grand time blazing through Commando Cody: Sky Marshal of the Universe. Its cheapo capers have all been assembled in good fun, but moxie and gadgets with “pew-pew” sound effects only get it by so far in the face of the ploddingly-plotted escapades they’re strewn throughout. Commando Cody has its enjoyable instances, though it makes you grateful for how much care has gone into crafting comic book-inspired cinema even more.