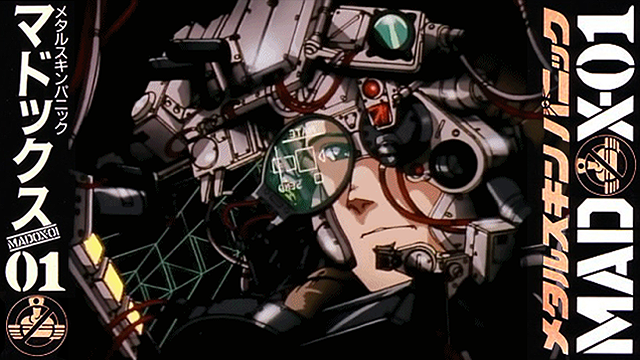 AKA City of Steel 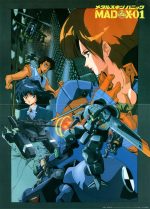 Animated by Hideaki Anno (Gunbuster, Neon Genesis Evangelion), Metal Skin Panic MADOX-01’s plot centers on Koji (Yasunori Matsumoto), an engineering student who accidentally discovers the Madox-01; a heavy mechanised, armoured exoskeleton. This military weapon, successor to the Madox-00, is equipped with a large array of weaponry and was designed to fight against heavy armoured vehicles. Glancing through the conveniently included instruction manual, Koji climbs into the Madox-01 exoskeleton.

Prior to Koji’s discovery, the Madox-01 prototype was successfully demonstrated by female test pilot Kusumoto (Yoko Asagami) against a mechanized tank squadron, led by Lieutenant Kilgore (Kazuyuki Sogabe). The success of this demonstration prompted transportation of the Madox-01 prototype across Tokyo. Ultimately this would lead to the idiotic loss of this extremely powerful and dangerous mech. 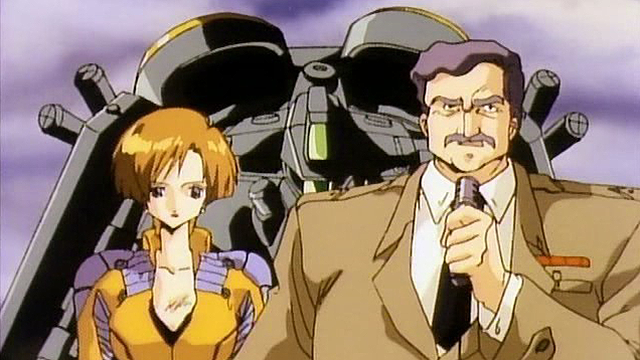 With his extremely limited knowledge of prototype’s infrastructure Koji accidentally finds himself stuck in this military mech which, seemingly on autopilot, heads off into the Tokyo nightlife. Koji needs to figure out how to pilot this metal monstrosity and fast! Not only has he realised that handling chopsticks is so much more challenging when you are encased in mecha, Koji has a date set later that night with his girlfriend, Shiori (Yuriko Ishida), and cannot be late under any circumstance; no matter how extreme!

The military are keen to reclaim their prototype (especially Madox-01 pilot Kusumoto) and will use any means necessary to ensure the Madox-01’s safe return. Lieutenant Kilgore on the other hand wants to see Maddox-01 destroyed, thus displaying the superiority of his own tank squadron that failed so spectacularly during the initial Madox-01 prototype demonstration. Therefore, whilst still learning how to navigate Tokyo in the hulking Madox-01, Koji has no choice but to try and defend himself.

Animated Mecha have been around since the 1970s with the introduction of Mazinger Z (1972-1974), and were further popularised with the release of Yoshiyuki Tomino’s Mobile Suit Gundam (1981-1982). Metal Skin Panic MADOX-01 has the distinction of being the first release from AnimEigo, and the first anime to be released on home video, uncut, in the United States (providing you don’t count the cheaply produced, family orientated, English dubbed rental fare). Manga Entertainment would later introduce UK audiences to MADOX-01 in 1993. 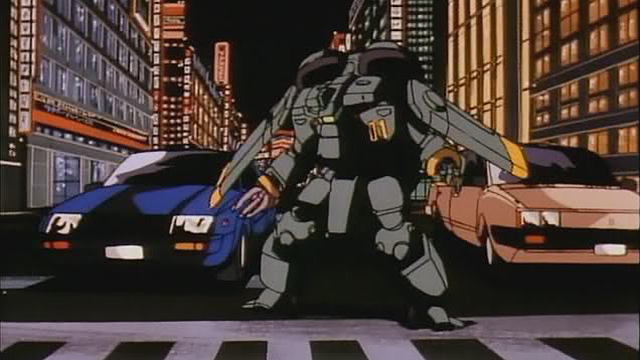 The 1990s was an era of discovery for me, during my preadolescence and early teenage years, as I was making the transition from Saturday morning cartoons (ThunderCats, The Real Ghostbusters) which, on UK cable television by the mid 1990s, were simply known as ‘everyday from 07:00 until 17:00 cartoons’, to the more adult themed Japanese animation that was beginning to arrive at our small island. By the late 1990s The Sci-Fi Channel (now Syfy) began showing anime regularly late night and early mornings at weekends, and I absorbed as much as I could. One of the many OVAs that left an impression on me during this time was Shinji Aramaki’s Metal Skin Panic MADOX-01. I had taped it onto VHS from cable, but I had to buy the Manga Entertainment tape as soon as I found it at old video market stall that sold ex-rental VHS.

For me personally, MADOX-01 is classic mecha. It’s another one of my guilty pleasures that I try to force upon other anime fanatics. The premise is simple but effective, with enough light-hearted humour punctuated throughout to differentiate this OVA from the, at times, stoic mecha subgenre. The animation when it was first released was outstanding, which when combined with the unique character/mech design made for a distinctive presence. The action sequences are relentless; each skirmish fetishising military hardware and the concept of high-tech warfare. Unfortunately I can’t praise everything about MADOX-01. Character development takes a hit in order to keep the action moving during the OVA’s short (but awesome) 48 minute running time. If only they had further developed Metal Skin Panic MADOX-01 into a television series…

Regardless, Metal Skin Panic MADOX-01 is an enjoyable self-contained story, packed with enough action to keep you entertained during it’s short investment of time as you watch the stuff blow up!