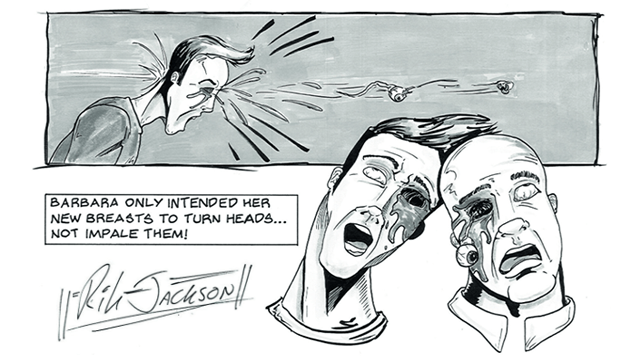 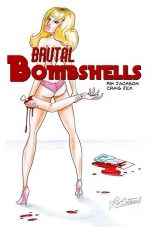 Brutal Bombshells is exploitation at it’s finest; a collection of six EC Comic styled short stories, each featuring femme fatales, dangerous ladies and psycho bitches who are determined to stalk you, stab you, and (as you take your last breath) gouge their way…to your heart!

I adore horror anthologies, in all formats, so I enjoyed Brutal Bombshells immensely. Imagine The Vault of Horror or Tales from the Crypt, but without the Comics Code Authority holding Jackson and Jex back; their middle fingers raised defiantly to Fredric Wertham. Don’t bother dusting off your first edition copy of Seduction of the Innocent. In the 21st century, comic books (or at least the indies) can depict self mutilation (Sweaty Suzy; my favourite tale of terror, and the first story in this anthology), decapitation (Dinner Date Debbie), exploding implants (Boob Job Barbara), liquidation (Melting Molly), dismemberment (Hacked Off Hayley) and murderous jealousy (Vengeful Valerie).

“After a long evening workout, Suzy liked nothing better than to unwind in the sauna. But when it’s time to head home, a broken door handle leaves her…TRAPPED!”

However, I do have two complaints; a.) Brutal Bombshells is criminally short at only 32 pages, and b.) each story suffered from a severe lack of character development; stitched together only by old, tried and tested horror clichés. The gore was glorious, but without the additional pages to flesh out each of the six murderous/misfortunate vixens, I simply didn’t care for the situations they were put in. Jackson and Jex have teased a second volume of Brutal Bombshells on social media… When Vol. 2 does come to printed fruition I hope the duo have built upon their grotesque imagery with more character depth. P.S. I would love to write the foreword to Vol. 2!

But, god damn it…this is exploitation! It works in the anthology format and there is plenty to like in Brutal Bombshells. Gorehounds, such as myself, will find enough claret being splattered around to satisfy their bloodlust. This alone is worth the price of admission.

Rik Jackson and Craig Jex’s debut comic book is a solid effort, despite the few mentioned shortcomings, and one anthology that I would like to see developed into a series. If you get the chance to visit Silent-P at a comic convention, pick yourself up a copy of Brutal Bombshells and perhaps an A3 print or two. Alternatively you can visit the Silent-P online store for all your pin-up/schlock needs.