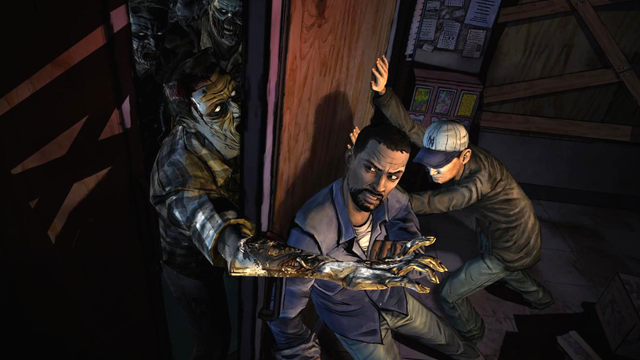 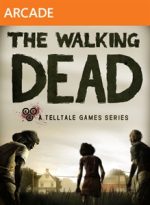 Developed by Telltale Games’ The Walking Dead is an episodic point-and-click adventure video game based on Robert Kirkman’s comic book series of the same name.

Known collectively as a “season” each episode was released cross-platform throughout 2012. The first episode of the five episode season was released in April 2012 to the Xbox Live Arcade marketplace as a standalone video game, whilst subsequent episodes were released as downloadable content (DLC).

The first episode begins in Atlanta, Georgia with protagonist Lee Everett (voiced by Dave Fennoy) being transported to prison after his conviction for murder. En route, during a conversation between Lee and the police officer escorting him, the patrol car strikes a person walking down the highway causing the vehicle to flip and spin frantically off-road.

Shortly after regaining consciousness, and miraculously escaping serious injury, Lee discovers what appears to be the body of the police officer lying outside the vehicle. Leaving the patrol car, Lee slowly approaches the corpse but is attacked and is forced to take immediate action! Grabbing the officer’s shotgun Lee takes aim and destroys the head in one single blast. This was not a living creature…

During the time Lee was unconscious the corpse of the officer had began to rot with the heat. This was the dead reanimated! A “walker”, slow in movement but with enough strength to lunge towards Lee. Unfortunately the sound of the shotgun blast has caught the attention of other men and women that have met a similar fate to the police officer. With more “walkers” now approaching, Lee stumbles away towards a nearby home in an attempt to escape the horror that is now stalking him… 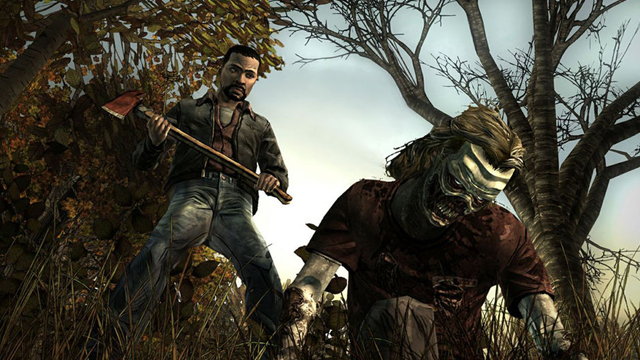 Played from a third-person perspective The Walking Dead presents the player with the ability to examine and interact with their surroundings. However, unlike many other point-and-click adventure video games, The Walking Dead does not emphasise puzzle solving. Telltale Games instead opted for the season to focus on story and character development that is affected by both the actions and dialogue choices of the player. It is your choices that will ultimately have an adverse change in the disposition of the other characters towards the protagonist. It is also your own choices that can lead to death, not just of the protagonist but of other characters as well… Whatever you decide to do or say, you better be prepared to live with the consequences. Your actions will drastically affect future episodes.

The attention to appearance and detail also makes The Walking Dead visually compelling. As the video game occurs with the events from the original comic book series Telltale Games have adopted a visual approach mimicking the art style of Charlie Adlard, the primary artist for The Walking Dead since issue #7 back in 2004. The Walking Dead is also very graphic in it’s depiction of violence. These moments can be unsettling, amplifying the harsh emotional tone in a video game where anyone can be torn apart without notice. Telltale Games don’t hold back when it comes to gore!

By the end of my first playthrough I became so overwhelmingly engaged with the characters that I felt varying degrees of emotion at the choices I had to make. You will become attached to the characters introduced in the first episode, and will have made many difficult decisions by the conclusion of the season, making The Walking Dead an emotional and deeply personal experience.