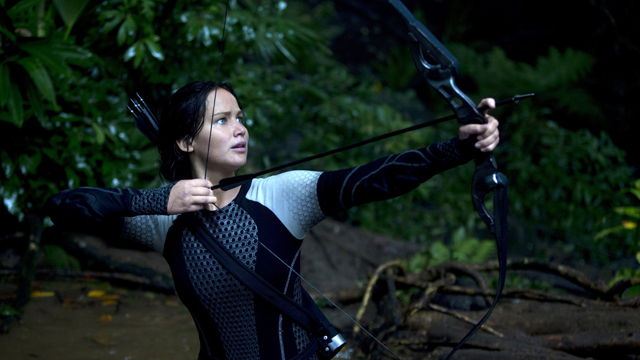 My impression on first hearing about the hugely popular [young adult] book trilogy (and now mega money-making feature-film franchise) The Hunger Games was: ‘Hey, teenage contestants forced to fight to the death in a populist amusement engineered by a manipulative, despotic master of a dystopian future world? Wow, what an interesting idea! …But wait, isn’t that just like…’ – Yes, you’ve guessed it – the premise of The Hunger Games by Suzanne Collins, which was published in 2008, was uncannily reminiscent of another book-turned-movie about kids being forced to violently murder other kids: Japanese cult author Koushun Takami’s Battle Royale, which was published as a novel in 1999, adapted into a hit feature film in 2000 and then turned into an equally popular manga series. I’m by no means the first to point out the resemblance – the internet has been in high-dudgeon over the parallels between both stories for some time, fuelled at least partly by Ms Collins’s now famous assertion – “Battle Royale? Never heard of it!” 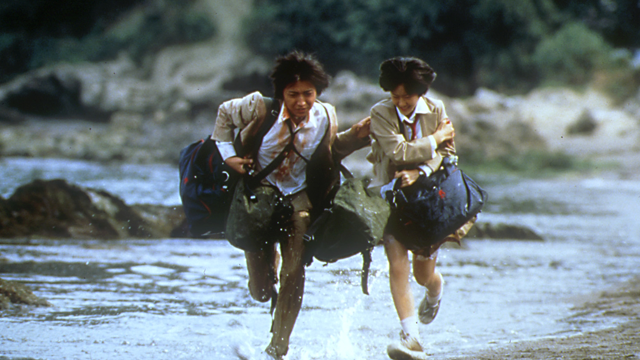 I admit I’ve not read The Hunger Games books but certainly the movies I’ve seen appear to derive rather a lot from the book of Battle Royale, if not the movie adaptation. Back in 2006, producer Roy Lee (The Grudge; The Ring) was apparently attached, along with Neal H. Moritz (Fast Five; 21 Jump Street) to a U.S. remake of Takami’s book Battle Royale. The project was already controversial due to the original Japanese film’s depictions of youth-on-youth violence. “The studios were very scared of comparisons to the Columbine shootings,” said Lee in an interview. He goes on to say:

“Look, there isn’t a studio out there that would invest the money to do a Battle Royale feature film remake now. Audiences would see it as just a copy of [Hunger] Games — most of them wouldn’t know that Battle Royale came first. It’s unfair, but that’s reality.”

But to be fair, perhaps we should examine the parallels (and differences) between the two a little more closely: (I’ll deal generally with the movies as these are the versions that readers will be most familiar with). 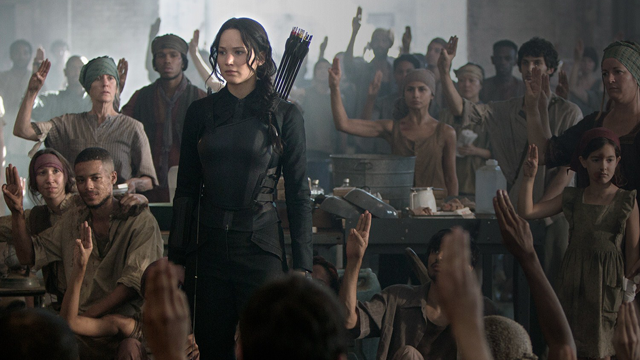 The protagonists in both are teenagers, but the tributes in The Hunger Games are given training. They have an amount of time to learn how to use weapons, how to track, hunt, fight and defend themselves.

Battle Royale wastes no time on such preliminaries – the students are simply gassed and dropped onto an uninhabited island. There they are told what is required of them – the grim rules of a contest in which they must murder their classmates until only one survivor is left. They are fitted with explosive collars to keep track of where they are, with the threat of detonation to induce them to obey. The rules are explained by a jolly lady in a jaunty video. They are handed a bag with a weapon (some more useful than others) and some supplies and sent out to kill each other. The purpose of the game is not merely the desire to bring under control the escalating disrespect of teenagers, as alleged in the movie, but a show of power from the ‘Republic of Greater East Asia’, a nation in an alternative-reality that might have been Japan, had it managed reach a stalemate with the United States in the WWII. The ‘military research’ concept of the games is a sham, the true purpose being to demonstrate to the already starving and beleaguered citizens that their lives belong to the Republic, and it can take them away at whim. Is it all beginning to sound a bit familiar? The second book in The Hunger Games trilogy seems even closer to Battle Royale, as the tributes are made aware of various ‘danger zones’ that they must leave by a certain time on pain of death — which is something that Battle Royale instigated while outlining their rules of ‘the game’. 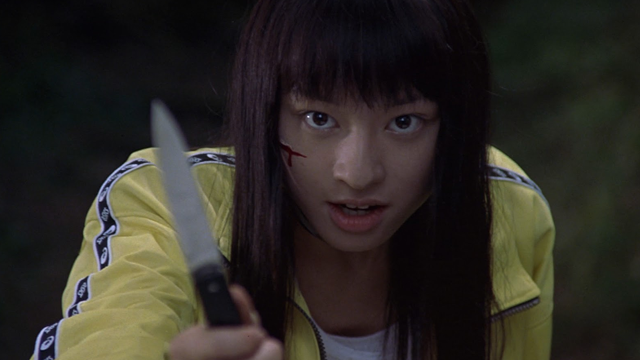 Both Battle Royale and The Hunger Games rely on advanced technology to monitor, infiltrate and police their games. Without the exploding collars permanently attached to each teen on the island in Battle Royale, there would be no real threat. While the technology utilized in The Hunger Games is more spectacular, imaginative and diverse than in Battle Royale (the Gamekeepers can create walls of fire and control herds of hungry monkeys) it’s still an important part of their world and is used in a similar manner.

Battle Royale and The Hunger Games both have a collection of suspect volunteers who sign up for reasons of their own and are willing to kill their comrades. These sociopathic competitors are used so that the sympathetic protagonists never have to kill anyone “nice” and lose the audience’s sympathy. Both stories end with more than one survivor, even though in both cases that is ostensibly against the rules and has apparently never happened before. Both stories have protagonists with dead fathers (although Shuya is actually an orphan -in the Battle Royale movie he finds his father’s body). Both narratives utilize strange murder dreams to illustrate various characters’ states of mind. 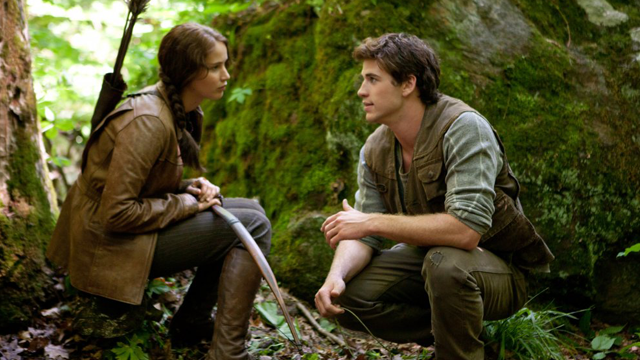 The love triangle in The Hunger Games is possibly one of the selling points of the series. There are two rival men longing for Katniss and this has resulted in the Team Gale and Team Peeta T-shirt merchandise. In both stories the protagonist is loved by the other survivor who takes care of them when they get injured. Meanwhile in Battle Royale the love story of Shuya and Noriko is downplayed to make room for the violence. While The Hunger Games is bloody, Battle Royale is full-tilt splatter. While one may sympathise with the couple, it’s hard to too involved as several boys seem to be in love with Shuya enough to kill for her (don’t you just hate it when that, happens?). But there are also tragic and romantic moments between a handful of the subsidiary characters, which leads to another difference between the two narratives — in Battle Royale the competitors seem to have a history. Witnessing the high school kids in Battle Royale deal with their emotional baggage adds a whole layer of horror and anguish (as when Kazushi becomes unhinged enough to threaten to rape female character Chigusa so they won’t both die as virgins). It all becomes emotionally as well as viscerally brutal, adding humanizing twists such as suicides and mounting paranoia that can result in a group of close friends turning on each other over some misplaced poison.

In The Hunger Games, Katniss doesn’t really get to know anyone besides little Rue, so we don’t care very much when anyone else gets killed. Also, almost every character in The Hunger Games at least tries to defend themselves. But in Battle Royale, there is a more tangled web of emotions: some characters choose to sacrifice themselves rather than kill their friends, others take the opportunity to take revenge for past slights or the neglect of their classmates. There is an altogether a more complicated interplay. 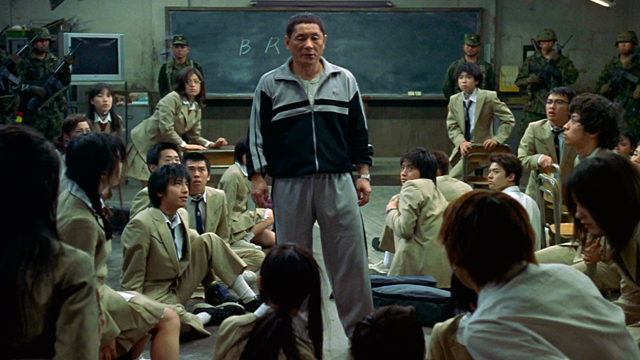 The game in Battle Royale happens off camera (in the book the excuse is that it is being monitored for ‘military research’). Meanwhile in Panem, The Hunger Games are used as an entertainment and subliminal caution for the rest of the world. The tributes are the puppets of a huge publicity machine and spend weeks in front of the camera, so that whole country can get to know them and become engrossed in watching them compete, and die.

My personal conclusion is, that one could summarize both stories in detail and use almost exactly the same words. Even so, one could argue that Battle Royale doesn’t own the rights to the thunderdome (even if it did have idea to put kids in it first) and there is no such thing as an original idea in Hollywood, and it wouldn’t be the only time we’ve seen movies with similar plots anyway. Even the original Japanese story surely owes a debt to William Golding’s Lord of the Flies, and Stephen King’s The Running Man and his short story The Long Walk?

Just as a summary and a humorous finishing flourish – allow me to direct you to the Buzzfeed article: 35 Reasons “The Hunger Games” Is Really “Battle Royale”

Now, I rest my case M’lud. What’s the verdict of the jury?