The Joker used his charm and wits to persuade women into helping him in his evil plans, and had an assortment of weapons that made him a formidable opponent.

By putting a demented twist on traditional clown props, the Joker used exploding cigars, knockout buzzers, flowers that sprayed poison gas, and even jumping beans to incapacitate people, and aid in his escapes.

The Joker was also skilled with electronics and utilized robots, satellites, and even a flying saucer in his schemes.

Some of his most famous crimes are stealing the Renaissance art collection, and putting a concentrated strawberry gelatin into the Gotham City Reservoir in an attempt to destroy the city’s water supply. 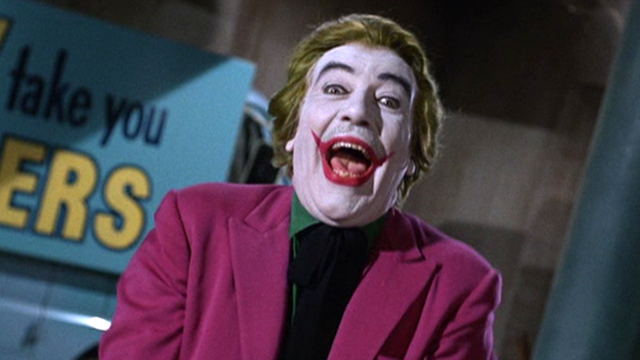 The Joker had a modified roadster much like the Batmobile, and his own utility belt. Obsessed with unmasking Batman to revel his identity, The Joker committed many crimes just to rile Batman up so he would appear.

Teaming up with The Penguin, Catwoman, and the Riddler, the Joker formed The United Underground in the 1966 Batman Movie. The plan was to take over the world, and kill Batman and Robin as they were the only ones who could stop them. Their plan ultimately failed, and all the villains were captured.

The Joker’s plans often failed because his schemes followed a pattern that Batman was able to predict. There is no doubt that The Joker was resilient, able to get under Batman’s skin, and usually had the last laugh.

Cesar Romero was a great choice to play the role of The Joker because of his diversity and talent. For almost sixty years the actor was devoted to film, radio, and television.