If there is one villain that is notorious in the Batman television series [and 1966 film], it’s The Penguin played by Burgess Meredith.

The Penguin was a master at keeping his motives a secret, and disguising criminal intentions through false enterprise. The charismatic ladies man was a sharp dresser, had a taste for the finer things in life, and often won the hearts of the the people in Gotham City.

The Penguin always carried an umbrella with him, and each one contained a different type of specialized weapon or gadget. Things like knock out gas, cutting tools, shotguns, grappling hooks, timed explosives, and even jet pack propulsion were all utilized in his umbrellas.

Crafty with communications as well, the bird lover often used carrier pigeons to deliver messages to his henchmen. 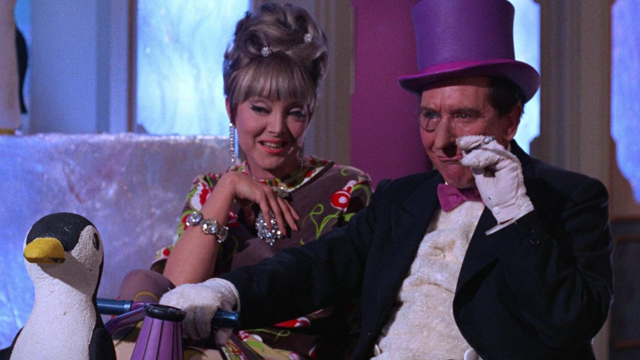 One thing Penguin loved to do was discredit Batman and Robin, and he even brainwashed Alfred into working for him. Although Batman would eventually break the scheme, it wasn’t before Penguin would make a complete fool out of him.

Burgess Meredith is one of the most accomplished actors of all time, and his portrayal of The Penguin was well very received by fans. The writers of the show kept a completed script on hand for whenever he was available.

Burgess appeared on the show in 20 different episodes, which is actually one more than Cesar Romero who played the Joker.