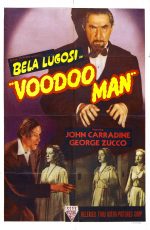 Horror fans nowadays are spoiled rotten. They’ve grown up with fancy special effects and boundary-pushing thematic content packaged with the latest genre titles, whereas viewers way back when made do with the main actor staring at everyone as a movie’s big draw. It was a simpler time, an era in which studios catapulted scripts into production and paid no heed to whether they had enough time or cash to get them right. Okay, so maybe this was a bit of a dark age for fright films, with a scant few diamonds in the rough emerging from Poverty Row’s consistent glut of bare-bones matinee fare. Alas, this was the fate of many an iconic horror star who fell out of Hollywood’s favor, as evidenced by the casting of the great Bela Lugosi in 1944’s Voodoo Man. One in a string of chillers that Lugosi made for Monogram Pictures, the flick at the very least rarely stifles his commanding presence, but the languid pacing and mostly forgettable characters sure put in their overtime working to its overall detriment. 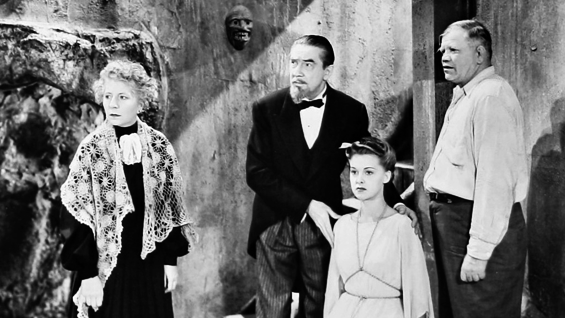 If the horror film has taught us anything, it’s that the open road isn’t to be trusted. A line-up of lovely ladies learns this the hard way when a phony detour sign leads them right to the demented Dr. Marlowe (Lugosi). For over twenty years, Marlowe has been obsessed with resurrecting his dead wife (Ellen Hall), using the life essence of girls he’s kidnapped to do so, albeit only for a brief period of time. The snarky Stella Saunders (Louise Currie) is the latest to be snatched up, but luckily, she has a traveling buddy that the doc failed to account for. A Hollywood screenwriter who’s seen it all, Ralph Dawson (Michael Ames) is quick to lead the charge when Stella goes missing, despite the police claiming it’s all a lost cause. But when Marlowe sets his sights on Ralph’s fiance (Wanda McKay), our man will have to work fast and sniff out the fiend’s base of operations before the members of his harem permanently become shells of their former selves. 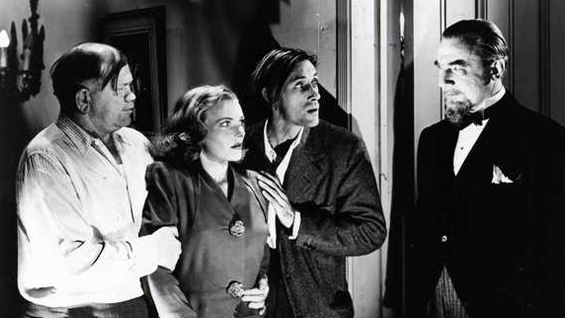 While his career sadly turned into more of a joke as it progressed, Voodoo Man came out when Lugosi was still doing some of his best work. It hit the screen in close proximity to The Return of the Vampire and one year before the guy tangled with Boris Karloff in The Body Snatcher, and in spite of this picture’s crummier qualities, his acting doesn’t suffer a whole lot. His is the same “lovelorn villain lashing out at the world” routine that not only he but also his contemporaries sleepwalked through countless times, but Lugosi still sells it like a champ. He uses his soft voice and penetrating gaze to their full effect, and though the theatrics surrounding these sequences are inherently silly, you almost buy him lulling his victims into submission with little effort. Strangely enough, Marlowe isn’t exactly the supernatural maestro of the title, as that honor falls mostly upon George Zucco’s flunkie, who lords over each unholy ceremony in a robe covered with random numbers and Lucky Charms shapes. Throw in John Carradine as another henchman (whose sole functions are playing bongos and pawing Lugosi’s brides of the damned), and vintage horror fans have a nice little congregation of genre talent to amuse themselves with. 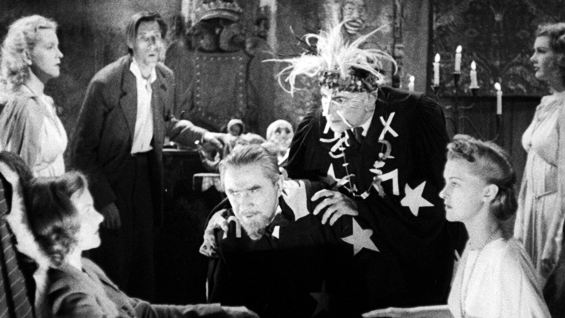 But familiar faces of fear aside, Voodoo Man hasn’t much content to its name, whether it’s legit thrills or ironic giggles. The film lasts a hair over an hour, but the story is constantly straining itself thinking of things to do to reach that mark; the ritual scenes go on forever, and the omnipresent clarinet soundtrack is more liable to rock you to sleep than grip you with blood-curdling dread. Though inoffensive by and large, our heroes nevertheless rank among the most nondescript stiffs that old-school horror cinema has to offer. Currie has a bit of spunk in her performance, and Henry Hall’s crotchety sheriff can be counted on for the occasional old-timey exclamation (“Gosh all fishhooks!”), but most everyone else we see gracing the screen is some shade of drab or another. It also seems as if the flick wants to take a stab at a more comedic and self-aware tone (with Ames’s writer character and a fourth wall-breaking final line), yet the notion goes by relatively untouched and amounts to little more than a modest smirk now and again.

Voodoo Man isn’t very good, but it’s not the be-all, end-all of B-cinema, either. While it’s certainly a trying watch at times, enough peculiarities are peppered throughout to capture your interest — and if that isn’t enough, the Rifftrax gang sells their own, easily-available version with a damn funny commentary track. Cheesy as it undeniably is, Voodoo Man is ultimately nothing to get worked up over.