Designed and developed independently by David Rosen and released in 2005 for Microsoft Windows, Mac OS X and Linux platforms, Lugaru (pronounced Loo-GAH-roo) follows Turner, an anthropomorphic rabbit, who embarks on a quest for revenge after finding his family and closest friends slaughtered by raiders.

As the highly political plot of Lugaru evolves, Turner uncovers an underlying conspiracy that threatens the entire rabbit kingdom of the island of Lugaru. It is up to you to utilise Turner’s impressive combat skills as he is forced to fight in hand-to-hand combat against raiders, the corrupt leaders of the rabbit republic and the bloodthirsty wolves. 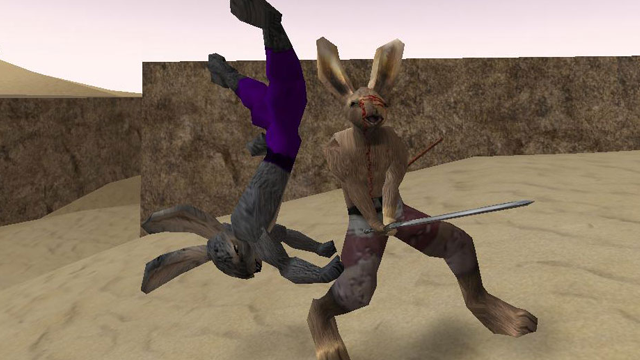 This is where Lugaru’s strength ultimately lies; in it’s unique combat psychics which in many cases can also incorporate knives, swords and bo staves, usually through the disarmament of an opponent. Utilising only three context-sensitive commands that allow for evasive manoeuvring, attacks and counter-attacks, timing becomes a key element within each fight and strategy is tantamount to survival. It is this sense of realism and freedom that makes every decision in Lugaru feel tense and satisfying in it’s execution.

Since Lurgaru’s release in 2005 the video game has developed a significant online modding community which has led to several new campaigns and graphical upgrades. Tim Soret’s HD texture pack, for example, was so well received that it is now included in Lugaru by default which led to the re-release in 2010 entitled Lugaru HD.

Although the central campaign in Lugaru can be completed in just under a few hours the additional difficulty settings, challenge levels and it’s addictive “pick up and play” gameplay really add to the replay value. Easy to learn, but difficult to master Lugaru HD is unique in it’s execution and highly recommended.