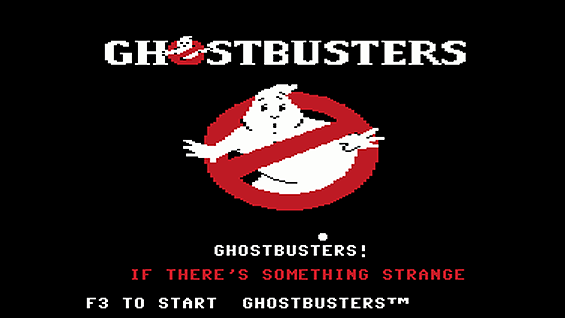 Published by Activision.
Adapted from the 1984 film Ghostbusters, directed by Ivan Reitman.
Buy on Commodore 64 from Amazon.co.uk 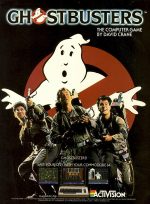 The Commodore 64 was an 8-bit home computer introduced in 1982 by Commodore International. The system dominated the market in the 1980s, and still holds the Guinness World Record as the highest selling single computer model of all time.

Even with more than 10,000 titles to choose from, there were some games for the Commodore 64 that stood out among the others. One of them was the 1984 release of Ghostbusters developed by David Crane for Activision.

The game begins with the classic logo, and the musical score from the film in a karaoke style intro. From here you start your journey by stating your name, and if you have an account or not. 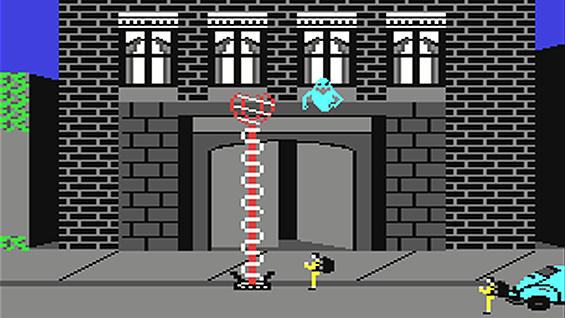 First time players are advanced $10,000 from the bank to spend on equipment and a vehicle. You get to choose between four vehicles that vary in price based on speed and loading capacity.

When equipping your vehicle, ghost traps are mandatory, but you decide how many you wish to carry. You can also purchase an image intensifier, a marshmallow sensor, a ghost vacuum, and other gadgets that will help you along the way.

Once you are ready to hit the streets, a map appears and shows a flashing house where a ghost is causing havoc. After riding to the location, you exit the car and place the trap anywhere you like on the screen. When the two players are set, the plasma beam will fire out of your proton pack.

The ghost will move erratically in a random pattern, so it’s important to snag him in the beam to control him before you engage the trap. Be careful not to cross the streams or you will be knocked out. If you miss the ghost with the trap, he will slime you and escape. Once the ghost is secure, you earn some cash, and the characters load him into the vehicle. 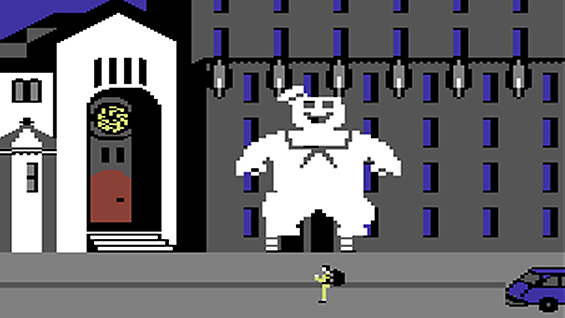 As you play the game, the paranormal energy of the city will slowly grow. Once it reaches around 5,000 the iconic Marshmallow Man will appear and attempt to smash a building. If he does, you will be penalized a lot of money, but you can stop Mr. Stay Puft with the proper equipment and earn a reward.

To complete the game, you have to make a profit as a Ghostbuster, and generate more cash then what you started with before the paranormal energy of the city reaches 9999. At this point, you automatically drive to the skyscraper where Zuul and his minions lurk on the roof. 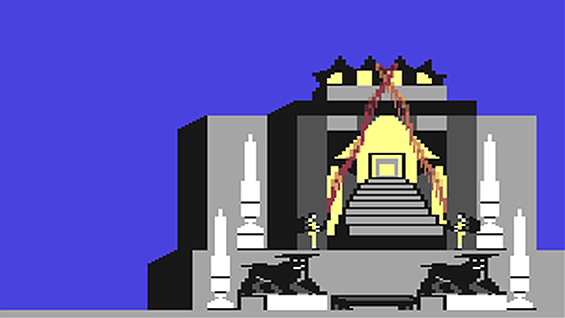 Before you can reach the rooftop, you must deal with the Marshmallow Man who is jumping back and forth in front of the door. With careful timing you can run pass him and get inside; if you get squished twice, the game ends and you don’t receive any money.

Once two characters get inside, you go straight to the rooftop. Similar to the movie the characters cross the stream, and the game ends with a congratulations on your victory, and a number code to enter next time you play that starts you with more money.

Although this game becomes repetitive, it gave hours of entertaining fun for Ghostbuster fans in the 1980s. The success of Ghostbusters the video game spawned many sequels across different platforms through the years.