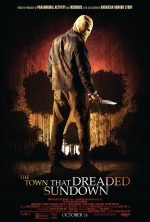 I must admit that I have never seen the original 1976 movie of The Town That Dreaded Sundown directed by low-budget indie pioneer Charles B. Pierce. The original was based on a killing spree which took place on the Texas-Arkansas border in 1946 committed by a man in a sackcloth mask dubbed the ‘Phantom Killer’ and became known as the Texarkana ‘Moonlight Murders’. The murderer was never caught.

This updated version is a sequel rather than a remake. The story revolves around the present day town of Texarkana and examines how its current residents would much rather leave the horror of their crime-ridden past behind them. Yet the small town can’t quite make that break, as every Halloween the original film is screened as a reminder. During one of these special Halloween screenings, Jami (Addison Timlin) convinces her date Corey (Spencer Treat Clark) to leave because the movie is making her feel uncomfortable. They drive off to a quiet area to talk and make out, but there, in the terrifying manner of the original murders, they are attacked by a man dressed as the ‘phantom killer’. Brutally murdering Corey and but leaving the terrified Jami alive, the killer demands that she tell the townsfolk that he is back, and sends her off, stumbling and bleeding, with the enigmatic warning that they should remember ‘Mary’.

This traumatic experience leads Jami to obsess over the original murders. With a view to discovering the Phantom’s real identity she begins to research the town’s past, with the help of her Grandmother (Veronica Cartwright) and one of her ex-classmates Nick (Travis Tope), a shy young man who works at the town archive. Meanwhile the new killer is on the prowl again, and bodies begin to pile up. Texarkana begins to face a bloody reminder by a man intent on giving the townsfolk a lesson in history. 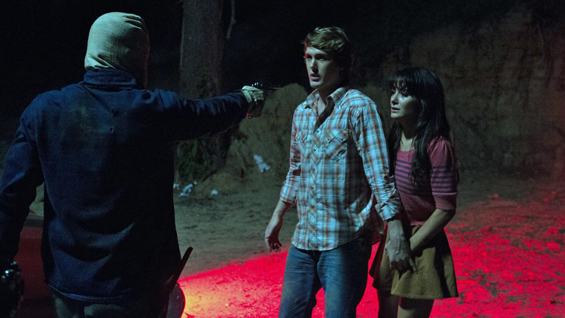 The new version of The Town That Dreaded Sundown comes from the team of producer Ryan Murphy, director Alfonso Gomez-Rejon and screenwriter Roberto Aguirre-Sacasa, whose shared TV credits include Glee and American Horror Story and they apply a similar visual style to The Town That Dreaded Sundown. The original movie, including character names, in-jokes and snippets of footage, is spliced into the action of the sequel – and from the look of it, the original appears to be a grimy, documentary-style affair. Its cinema verite aesthetic, which combines deadpan narration and chilling re-enactments, created a kind of true-crime sensationalism that reputedly influenced the horror aesthetic of 1970s slasher classics like The Texas Chain Saw Massacre, and has been borrowed many times, including by the current ‘found footage’-style horror trend.

Director Alfonso Gomez-Rejon gets rid of the documentary style of the original and replaces the newsroom-style voice over with a narration by the central character. His movie is a slick and violent – with a number of quick cuts and skewed images – there is a visual energy which keeps the audiences’ attention. While many of the scenes are familiar to fans of the genre, the filmmaker – along with cinematographer Michael Goi – experiment with shots, odd angles and lenses to keep things fresh. Many of the techniques Gomez-Rejon chooses are arresting, even though the gimmicks can sometimes interfere with the tension.

The movie opens with an extended tracking shot that glides around the Halloween screening of the original movie, presenting the town where the first terror took place and which appears to be stuck in a 1970s time warp. (Even the opening credits have retro homages, including a nod to Orion Pictures, the long-dormant MGM offshoot that distributed the original). With many references and the inserted footage from the first film, the past and present are shuffled together – a risky technique but one which works well here and gives the entire enterprise a dreamy, hallucinogenic effect. One side plot introduces the son of the first film’s director, Charles B. Pierce Jr., as a potential murder suspect. (While American Horror Story stalwart Denis O’Hare portrays him on screen, the real Pierce Jr. also has a small cameo in the new movie). 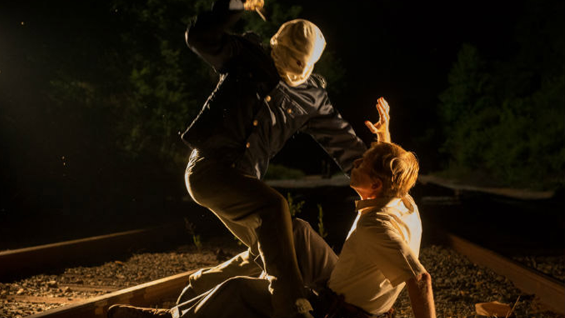 What makes the new movie interesting is its attempt to let both films, as well as the tragic real life killings, reference each other and exist in the same space. This self-awareness is successful on several levels and allows that the repercussions of a sixty-five-year-old series of murders can come back to haunt a place and its latter-day residents a generation later. As Jami’s grandmother and life-long resident of Texarkana says, ‘those were the days when the people of this town started locking their doors’. On first impression, The Town That Dreaded Sundown seems intent to deconstruct conventional horror tropes in the tradition of Wes Craven’s Scream (albeit without the humour). It also seems to want to say something about the nature of grief; if you cannot move past a horrible event – like a town being scarred by a series of brutal murders or your parents being senselessly killed in an car accident – then that one terrible event will define your whole life.

However, the movie’s prolonged and contentious post-production seems to indicate that the director’s vision has been tampered with. Moments of studio interference begin to intrude, from inserts that appear to be wedged into tracking shots to moments that are clearly cut or that end too abruptly. Unfortunately the movie quickly falls back on the standard Slasher film tropes with all its red herrings, false endings and jolting shock tactics. Underdeveloped subplots involving a hypocritical, power-hungry preacher, as well as Jami’s tragic family background and fragile mental state, fizzle out unsatisfyingly.

In a post-screening Q&A in 2014 Gomez-Rejon admitted he was forced to cut fifteen minutes of running time from his movie, including various postmodern gimmicks, which may explain why the final hour has some odd plot twists and messy loose ends. (Although I was rather bemused by quite why the killer had initially left Jami alive – ostensibly as a mouthpiece for his killing crusade, but is afterwards so intent on killing her?) The finale seems rushed and the ultimate shock twist, when the Phantom is finally unmasked, feels rather contrived. Its lapse into safe Slasher conventions is regrettable, as The Town that Dreaded Sundown had the potential to be a stylistically adventurous, albeit brutal, true-crime inspired feature.

The Town That Dreaded Sundown is available to buy from Amazon.co.uk