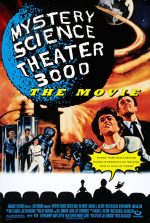 Set between seasons six and seven of the television series Mystery Science Theater 3000, and released in 1996, MST3K: The Movie presents it’s long-running concept of providing comic narrative (otherwise known as riffing) over a unintentionally bad movie to a wider audience.

Working from the underground laboratory Deep 13, mad scientist Dr. Clayton Forrester (Trace Beaulieu) contacts the crew aboard the Satellite of Love; Mike Nelson (Michael J. Nelson), Tom Servo (Kevin Murphy), Crow T. Robot (Trace Beaulieu) and Gypsy (Jim Mallon). His intentions? To break their wills by forcing them to watch yet another bad B-movie. You see, Mike and his robot companions are trapped in space upon the Satellite of Love; serving as guinea pigs in Dr. Forrester’s plan for world domination.

For those who are familiar with the television series you will understand that Dr. Forrester’s plan is to force the crew aboard the Satellite of Love to watch a series of B-movies, from many different genres, in order to find the perfect weapon: the perfect B-movie! Luckily for Mike Nelson, the sentient robots created by his predecessor (and escapee) Joel Robinson (Joel Hodgson), collectively known as “the ‘bots”, help him to keep his sanity as together they riff upon the movies they are forced to endure, for their own amusement.

Tonight they will be subjected to the 1955 American Technicolor film, This Island Earth, based upon the novel of the same name by Joseph M. Newman. 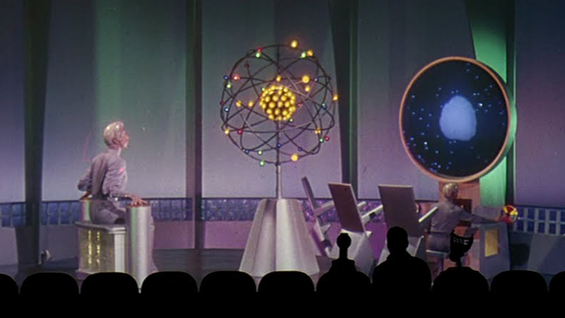 Joseph M. Newman also directed This Island Earth, along with Jack Arnold, and when viewed as a standalone film (as opposed to MST3K: The Movie’s film-within-the-film concept) it is a solid piece of science fiction cinema. The critical response to This Island Earth, upon and since its release has been mostly positive, due to it’s technical effects, special make-up effects and generally being an imaginative, competent example of the science fiction genre. The film is also notable for being Universal Studio’s first sci-fi excursion in Technicolor.

This is not to say that you won’t find yourself hunched over in stitches, laughing at a quip Crow T. Robot has made at This Island Earth’s expense: 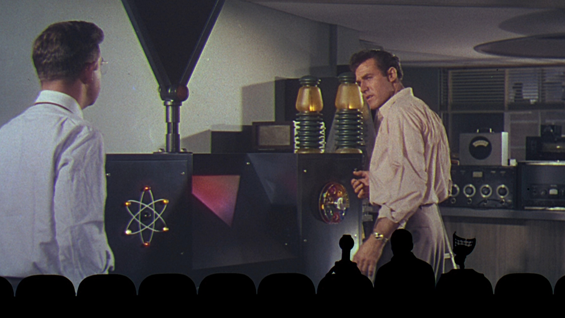 If you are unfamiliar with the television series let me explain the charm MST3K’s concept extrudes. The movie that the crew are forced to watch is bookended and interspersed with what are known as ‘host segments’. These are usually a series of short sketches that reference the B-movie the crew will be watching in that particular episode, and various other cult classics. For example, in MST3K: The Movie Tom Servo reveals that he has his very own Interocitor; a fictional telecommunication device featured prominently in This Island Earth.

Speaking of This Island Earth, the movie has been edited down from it’s 87 minute running time in order to feature in the 73 minute long MST3K movie; a strange decision (presumably made by Gramercy Pictures) considering each episode of MST3K has a approximate runtime of 90 minutes. 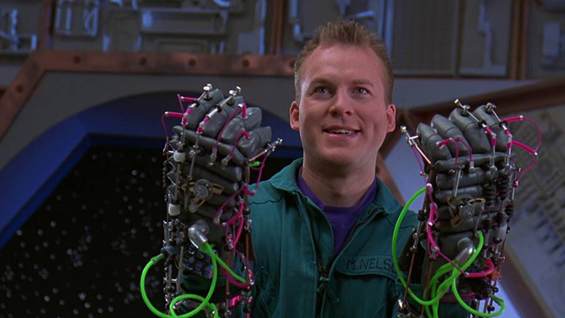 If you thought MST3K has a cult audience in the United States, it was virtually unheard of in the United Kingdom. It had a brief run on the Sci-Fi Channel (UK) I believe, but most of my fellow countrymen (and women) were exposed to Mystery Science Theater 3000, and the quirky crew aboard the Satellite of Love, thanks to the world wide web. (We love you Tim Berners-Lee!) I’m talking about the 1990’s though, so exposure was via WAV audio and low-res video clips that would take hours to download on a dial-up connection.

Mystery Science Theater 3000: The Movie isn’t the best the series has to offer but it is a great introduction for fanatics of low-budget cinema with a sense of humour, a couple of beers and a bowl of popcorn.

Mystery Science Theater 3000: The Movie is available to buy from Amazon.co.uk