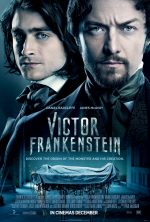 “You know this story” we are confidently informed at the outset of this movie –‘Well actually, no, no we don’t’, and neither did Mary Shelley who did not include the character of ‘Igor’ in her book. Here Igor is no less than the central character and narrator of the heart-stopping, or dare I say ‘electrifying’ (sorry) bromance between Victor Frankenstein (James McAvoy) and his assistant/protégé/house-mate (delete as you consider appropriate) Igor Strausman (Daniel Radcliffe).

While searching for animal body parts at a London circus, radical scientist Victor Frankenstein comes across hunchback clown and general punch-bag of the moustache-twirling melodrama villains which comprise the circus’s inmates. But the reviled hunchback has a secret – in his spare time he is a gifted student of anatomy and surgery, but the nasty circus performers only see him as a freak. When a lovely trapeze artiste takes a fall and the hunchback is on hand to set her broken bones, it takes all of five minutes for Victor Frankenstein to assess the hunchback’s medical aptitude.

Dr. Frankenstein engineers a breakout from the circus and lickety-spit, cures the hunchback of his deformity. Ten minutes with the good doctor – brandishing a giant syringe to drain the hump (actually an abscess, not a spinal deformity) then crunching his spine in a bit of impromptu chiropractice and promptly strapping him into a corset and bob’s your uncle! – The erstwhile hunchback is throwing crazy shapes on the dancefloor with his girlfriend! (I bet you think I’m joking, you poor saps). 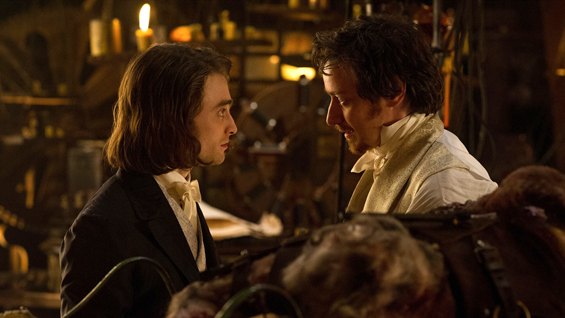 Not only does the brilliant doctor Frankenstein offer the hunchback board and lodging in exchange for his medical knowhow, he suggests that he adopt the name of his ‘missing’ housemate – a certain Igor Strausman. The men develop a rather unequitable friendship (it seemed to me) mostly based on gratitude from Igor and his professional usefulness for Victor but at least it offered the opportunity to work on ‘ground-breaking research that could change the world forever’! (according to Vic, maverick visionary that he is).

Written by Max Landis (Chronicle, American Ultra), Victor Frankenstein isn’t so much a re-imagining of Mary Shelley’s original novel Frankenstein; or, The Modern Prometheus (1818), rather than a form of origin story for the eponymous character, as seen from the perspective of Igor (who actually appeared only in subsequent movie adaptations).

Unfortunately, like many other origin stories grafted onto famous literary characters, Victor Frankenstein doesn’t really offer fresh insight into its namesake or cast any new light on the themes and ideas of the Frankenstein mythology, which would be a difficult task in itself, as so many science fiction and horror stories have ridden on the coat-tails of Shelley’s novel (one of the most recent being the overrated Ex-Machina). 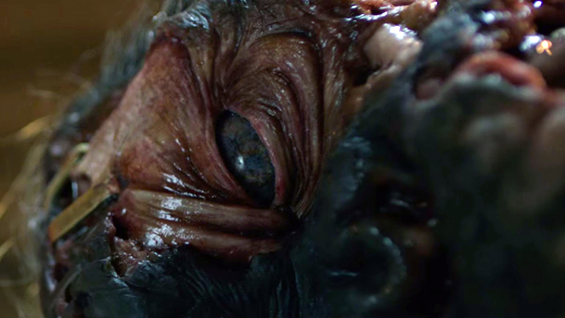 Landis’ screenplay and script tries to meld together too many genres – Victorian adventure, period horror, dark comedy, romance– yet never fully develops any of these components and lacks a solid emotional core to make the film into a tonally consistent, cohesive whole.

Paul McGuigan’s directorial approach is very reminiscent of his work on the BBC’s Sherlock (he directed four of the series’ nine episodes); not least because the character of Victor Frankenstein is also written as a slightly crazed, fast-talking genius with Igor as his exasperated companion acting as his conscience, but also presents familiar stylistic flourishes, such as the use of on-screen graphics (used here to illustrate a knowledge of anatomy), fast-cutting montages and other quirky touches. This made me contemplate whether this Frankenstein wouldn’t have been more appropriate as a stylish TV mini-series.

The story has been relocated to fin-de-siècle Victorian London. The city, like the monster, is somewhat stitched together from disparate parts so we get a steampunkish juxtaposition of the traditional and the modern – a muted colour palette with Wren’s architecture looming in the background over ads for Bovril in the foreground. 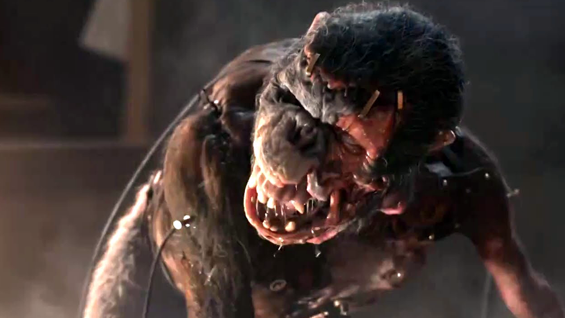 The horror comes in the form of gross-out, Grand Guignol elements – wobbly, meaty internal organs, extracted eyeballs, and Victor’s prototype of the monster which is a grotesque, fly-infested meat puppet consisting of bits of human organs and a murderous monkey barely holding itself together.

This movie could have been uninspired AND dull in the hands of less experienced and likeable actors, but McAvoy goes for the ham and plays it just a touch too BIG for this film. However, he’s still compelling to watch – with those azure-blue eyes on the verge of tears, or the crazy grin, or the mad spitting delivery of his lines, eyes rolling around as he looks for another bit of scenery to chew on – he still manages to light up the screen. As he has proved again in the X-Men movies – when McAvoy is acting, you can’t really pay much attention to anything else, be they bright-blue shape-shifters or ten-foot meat-monsters. Perhaps he was attempting to give the everso eager Radcliffe a few lessons, forgetting that all his emoting would end up on screen? Then there was Andrew Scott, lurking moodily at the edges of the story and quietly making his underwritten and pointless detective Inspector Turpin into an interesting character.

This movie certainly hasn’t been McAvoy’s best career choice, but dammit if I didn’t leave the theatre shaking my head but somehow still chuckling to myself about how oddly delightful his unabashedly whacky Frankenstein was. Indeed, the film as a whole might have been more insanely manic and entertaining if everyone had approached their roles in as tongue-in-cheek a way as McAvoy did. 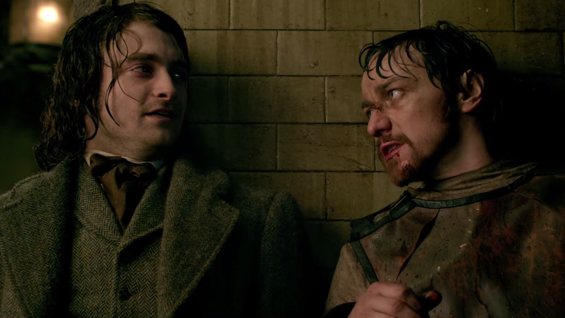 The movie does come across rather as though it was thoroughly chopped up during post-production, giving rise to a film that is franticly paced but clumsily structured. The film saw multiple release date delays and there are trailer clips notably absent from the theatrical cut, suggesting that Victor Frankenstein went through heavy post-filming revisions.

Although Victor Frankenstein is getting a general panning from critics for its flaws, it still has a crackling energy and aspiration, but much like its namesake, ends up being a bit nutty and unhinged. It is undeniable tosh, but then again, isn’t most of what is on offer at the local multiplex? If it is tosh, at least it isn’t dull tosh – it’s rollicking, entertaining, Saturday-night-at-the-movies tosh.

Victor Frankenstein is available to buy from Amazon.co.uk