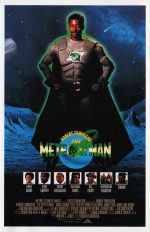 With all this talk lately about the over-saturation of superhero media, people tend to forget how barren the scene used to be. Sure, mine was the generation raised on Tim Burton’s Batman and the “X-Men” animated series, but they were the scant few examples of quality entertainment that muscled their way through the out-of-touch competitors holding the genre back. Eight-year-old me yearned so passionately for things to get better, which is why he couldn’t help but get excited over the ads for a strange new movie found in the pages of his beloved “Silver Surfer” books. It was called The Meteor Man, featuring an unknown hero but a huge cast of familiar (and funny) faces. Of course, I instantly ate the flick up when I got my hands on the VHS, but unfortunately, time hasn’t been its greatest ally. As admirable as The Meteor Man is for its innocence and total lack of cynicism, it makes for a pretty awkward watch, with the filmmakers too hesitant to go as far as they should to leave their desired impression upon viewers. 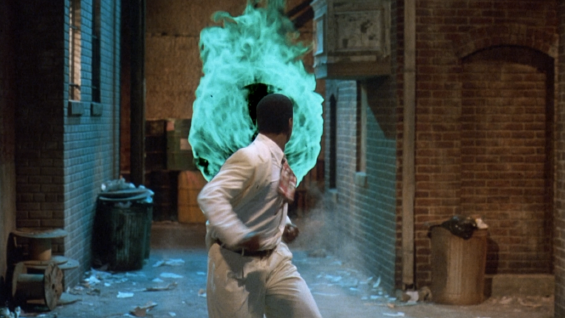 When it comes to fight or flight, schoolteacher Jefferson Reed (Robert Townsend) is the first to start flapping his wings. The man is as mild-mannered as they come, opting to run and ride when confronted with any sign of danger. It’s the only way to survive in a neighborhood like his, which has been all but overrun by a gang known as the Golden Lords. But Jefferson’s days of ducking out of sight come to an end one fateful night, when he’s struck by a giant, green hunk of meteor. Not only do all of his wounds heal quickly, the incident also endows him with a number of super powers. From incredible strength to communicating with dogs, Jefferson uses his newfound gifts to rid his community of the crime infesting it as a hero dubbed “the Meteor Man.” Unfortunately, our man’s crusade has irked the Golden Lords something awful, and the gang responds by going after his loved ones…just as his abilities begin to fade… 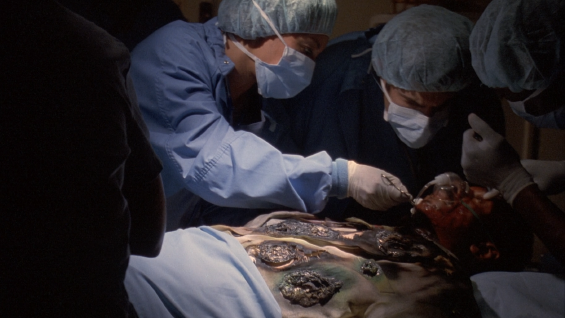 The Meteor Man bears a close thematic resemblance to another maligned ’90s superhero flick, Steel. We laugh now at Shaq’s acting and how conspicuously rubbery that “metal” suit was, but to give the film credit, its heart was in the right place. It stumped for community strength, family values, and keeping the streets safe, all noble virtues that The Meteor Man holds equally dear. Townsend (who also wrote and directed the film) seeks to spin a more grounded yarn than the genre usually sees, with Jefferson addressing those immediate concerns he’d ran away from for so long instead of launching himself into global heroics. There’s an optimism at work here that’s rarely seen in superhero media these days, as Townsend wholeheartedly believes in his movie’s capacity to inspire good and do away with the real-life versions of the plights he depicts. Having cut him a $30 million check, MGM was certainly sold on his vision enough to not only help give it life but to make the whole thing look fairly spiffy, as well. But positive vibes aside, the film — much like its protagonist, pre-super powers — feels too unsure about what it is to make the sort of difference that it’d like. 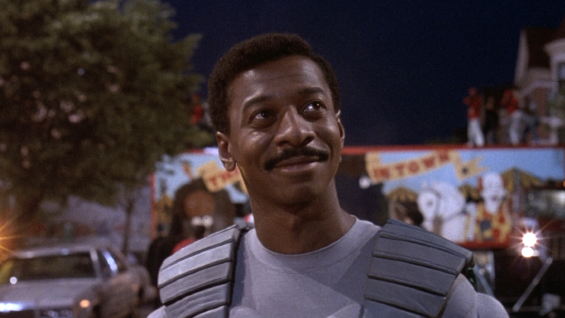 In short, The Meteor Man just doesn’t know how seriously to take itself. The picture’s look and PG-friendly study of gang violence strongly suggest that Townsend wanted to create a legit new superhero saga, yet strewn about are brief and random comic interludes that seem swiped from a straight-up spoof. Most of the latter scenes entail Jefferson’s laundry list of talents, the majority of which are established to service one or two measly jokes. If you’re waiting for Meteor Man’s heat vision or ability to memorize a book’s contents for thirty seconds to have any bearing aside from providing a quick gag, then get comfortable. These moments all add up to a lot of comedic dead weight, vain attempts at levity that do no favors to the somber message Townsend is trying to get across. Speaking of which, Townsend’s own muted performance plays a significant role in dragging down the movie’s tone; he’s fine as the soft-spoken Jefferson, but his blandness doesn’t go away for the whole running time, robbing the character’s arc of a truly triumphant finale. Also not helping is how the enormous supporting cast — comprised by the likes of James Earl Jones, Eddie Griffin, Don Cheadle, Marla Gibbs, and many more — is so bold and colorful, which only enhances our protagonist’s unengaging persona.

The Meteor Man means well, but its reluctance to be both too silly with its humor and too grim with its conflicts render the movie a fairly dull stalemate. I dug it as a kid and (for some reason) despised it as an impetuous college grad, and right now, my feelings fall squarely in the middle, torn between admiring its ambition and being bored by its execution. Some see the recent rise in superhero cinema as a scourge, but if it means being able to pull off concepts like the ones The Meteor Man presents more smoothly, then I welcome it with open arms.

The Meteor Man is also available to buy from Amazon.co.uk