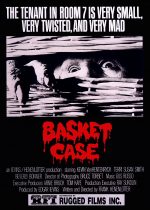 In 1982 Frank Henenlotter introduced an unsuspecting public to Manhattan’s Hotel Broslin, a sleazy establishment situated right at the heart of 42nd Street…

Arriving at Times Square carrying nothing more than a backpack and a large wicker basket Duane Bradley (Kevin Van Hentenryck) promptly checks into Hotel Broslin. “What’s in the basket?” is the usual greeting Duane is met with, but he prefers to shy away from the subject. I suppose he wouldn’t want the attention it would bring, having to explain that the basket is actually home to his deformed, and formally conjoined twin brother Belial. It would certainly ruin the element of surprise! 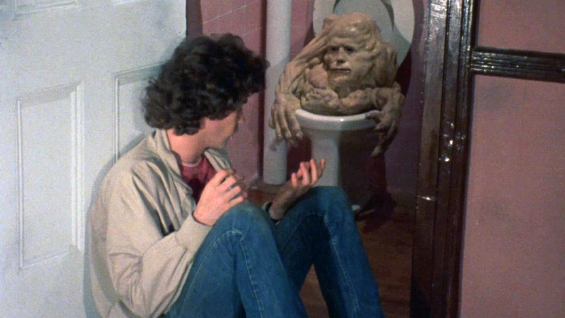 So why Hotel Broslin? It was the first hotel they passed, yes, but why the most depraved area of New York and why now? It’s quite simple really…vengeance! You see, Duane and Belial were separated not by mutual agreement, but rather at the behest of their father (Richard Pierce) who believed the ‘deformity’ was the cause of his wife’s death during childbirth. No qualified surgeon would perform the operation, as it would result in the death of Belial, so the surgery was staged at the family home by a trio of unscrupulous surgeons (one of which was a veterinarian). This was a story both hotel tenant Casey (Beverly Bonner) and Duane’s love interest Sharon (Terri Susan Smith) would soon learn the hard way… No one expected that Belial would survive!

One of the so-called surgeons, Dr. Lifflander (Bill Freeman) had already met his demise prior to the opening credits, leaving his patient records conveniently available on his desk. These documents confirmed the names of the remaining two doctors that had aided in the brothers surgical separation; Dr. Needleman (Lloyd Pace) and Dr. Kutter (Diana Browne). Now, in Room 7, Duane and Belial plan their revenge. 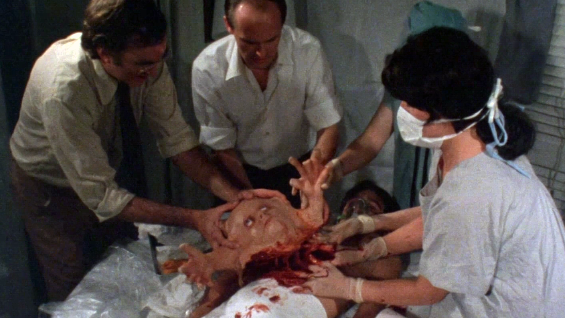 Basket Case is the result of Frank Henenlotter’s determination to make a horror movie. Once the script was written Henenlotter secured the budget and assembled a small cast and crew, ready to take on the task at hand. The acting was over-the-top, the special effects, especially for Belial, were crude (but resulted in one of the most entertaining, and horrific monster reveals I have ever seen) and the lighting was harsh. But through Henenlotter’s unique direction, humour and absurd subject matter, everything I previously outlined came together and succeeded everyone’s expectations. Basket Case (in it’s uncut form) showed successfully, night after night, at various midnight screenings for several years, before being released to the emerging home video market where it found further success.

Basket Case is not only a fine example of low-budget splatter, but is also a great insight into New York (circa 1982) when areas, such as 42nd Street, were considered the heart of grindhouse cinema. Shot on 16mm film the grain only helped to convey the grittiest of this era in New York’s history, which worked in the film’s favour. This lovingly crafted, demented exploitation splatter flick was groundbreaking when it was released and still proves to be just as unique today.

Basket Case is available to buy from Amazon.co.uk