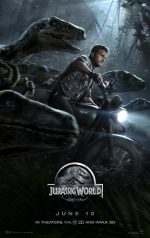 It may have been a mistake for me to view the new Jurassic World movie in the company of a couple of Palaeontologists, but they were excited to see it, having grown up with all the previous films. Their enthusiasm soon waned however, when presented with the movie’s deviations. Scientific advancement be damned! Rather than feature updated dinosaurs and present audiences with fascinating new knowledge, Jurassic World stuck with anachronistic representations. It opted to stick with the outmoded notion of gnarly, scaly-skinned raptors, ignoring all fossil evidence demonstrating the presence of feathering in bird-like dinosaurs and bony feather bumps on Velociraptor ‘arms’.

‘Yes,’ said the Paleos, shaking their heads glumly, ‘we know that it’s not a documentary, and that it’s just entertainment, but the Jurassic Park franchise had such an influence on the public’s perception of these prehistoric creatures, it’s irksome to see the movie miss the opportunity to be pertinent’. 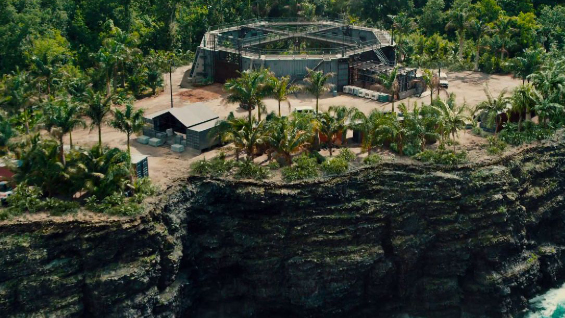 They bemoaned the grotesque portrayal of the pterosaurs, the inaccuracy of the herbivores Stegosaurus and Triceratops, and the fact that the movie’s gigantic mosasaur (a paddle-limbed, sea-going lizard, not a dinosaur) was not the sleek, shark-tailed reptile of 21st century perception, but a lumpy leviathan sporting a frill. Previous instalments of the franchise had at least gone some way in trying to be accurate, as far as the knowledge of the time went, but in this sense, Jurassic World appears to be a disappointment.

However, most viewers of the movie are not looking for accuracy but, as the movie’s marketers indicated with their tag line, the public want “Bigger.Louder. More Teeth.” They get it with the entirely fictional CGI dino, ‘Indominus Rex’.

John Hammond’s vision of Jurassic Park has now grown into a vast, hi-tech, theme park called Jurassic World – owned by billionaire Masrami (Irrfan Khan). Running this massive dino enterprise is Claire (Bryce Dallas Howard) a martinet in high heels who wants to run the park like a precision instrument. She is also the neglectful aunt of a couple of nephews who have come to stay with her to get reacquainted and enjoy the spectacle, but although auntie Claire has arranged VIP passes and a pretty minder to look after them, she’s far too busy the pay her kin any attention – preferring instead to spout corporate jargon, keep her hair severely ironed and her clothes impeccably white while strutting around the jungle in impractical high heels. 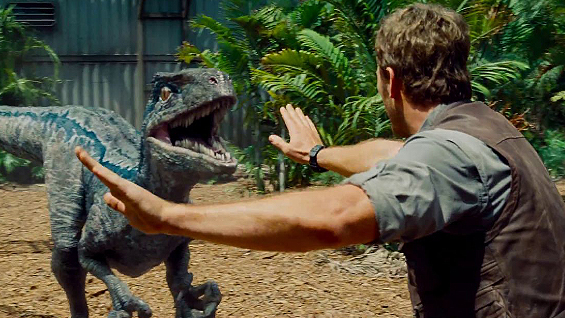 To draw more tourists in, Jurassic World’s geneticists, led by brilliant, amoral scientist Henry Wu (B.D Wong) have engineered a predator-albino-hybrid they have called “Indominus rex” who they anticipate will send revenues soaring. Park owner Masrami wants to consult with ex-navy guy, now dino-whisperer Owen (Chris Pratt) as to the living quarters of this new attraction, rather to the discomfort of Claire who has had a disastrous date with the guy and found herself entirely incompatible with his easy-going, somewhat condescending demeanour.

Skulking about in the background are quasi-military contractors led by Hoskins (Vincent D’Onofrio), who is impressed by Owen’s success in ‘imprinted himself’ on and styling himself as the ‘Alpha’ male with a group of young Velociraptors born at the park. Owen has apparently trained these sneaky, snappish, eating-machines to follow his orders using merely a dog clicker and a bucket of dead rats. Nasty old Hoskins wants to weaponize Owen’s raptors and use them in America’s foreign wars. “Robots?!” scoffs D’Onofrio’s baddie: “This is the future of war!” (Wouldn’t that be a crazy spectacle? Where’s THAT movie?)

Control-freak Claire naturally manages to misplace her own nephews, Gray and Zach, (Ty Simpkins, Nick Robinson) as soon as the park’s most unpredictable attraction ‘Indominus rex’ busts out of confinement. The 50-foot predator with needle teeth and razor intelligence predictably lays waste to everything and everyone in its path as it merrily makes its destructive way to the evacuation area holding thousands of yummy, fat tourists. 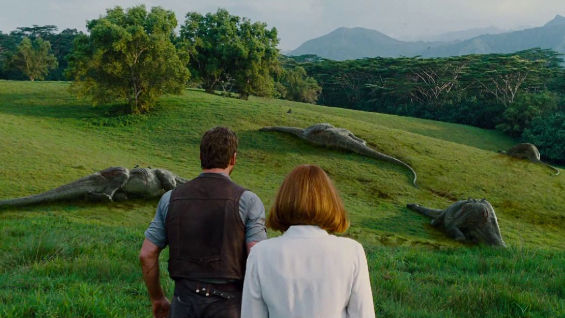 It’s all good, old-fashioned Saturday-matinee fun, and as critic-proof as any movie franchise might be, but bigger isn’t necessarily better, and unfortunately, Jurassic World doesn’t come close to the sense of wonder that Spielberg’s original Jurassic Park film mustered so effectively. The new movie may have more roar, but it has less bite. Which led me to ponder why this should be the case? It has media golden boy Chris Pratt in the lead, whose easy charm contributed to making Guardians Of the Galaxy a hit, but amiable as he is, he can’t quite rescue a goofy plot that has him constantly running around in hysterical activity. At least he’s wearing sensible shoes, which is more that can be said for Howard’s Claire, who throughout the frantic action insists that her character run around wearing four-inch stilettos. Apart from defying biology and physics by hiking through jungles and forests without twisting her ankle or breaking off a heel, someone should really have pointed out that if she tried to outrun a hungry dinosaur in those shoes she’d be the first course of lunch. Rather than lend credibility to her character her irrational attachment to her stiletto heels became a distraction and the focus of much derision amongst viewers. 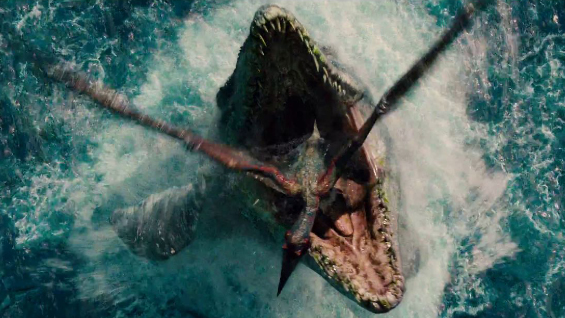 This alas, was often the way with the plot, which allowed too many daft intrusions. Penned by an array of screenwriters and shunted all over the place in the intervening years, Jurassic World relies on a patchwork made up of previous plots and sketchy characters who don’t get the chance to engage us in any way similar to Sam Neil, Jeff Goldblum, Richard Attenborough or the delightful Bob Peck. The action only occasionally rouses, and only the third act might deservedly be called spectacular, not least because an erstwhile, more beloved creature comes to save the day.

Although not very scary, this latest instalment to the franchise is all about the dinos and is manic enough to encourage audiences to pay a return visit to the Jurassic World. Michael Giacchino’s score skilfully takes its cues from John Williams’ well-known theme, but makes its own stylish contribution.

Most telling is Jurassic World’s examination of corporate money-making, theme park-style tourism and relentless commercialization, which possibly indicates a certain knowing and ironic sense of humour about its own mercantile motives.