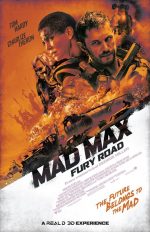 What can I say about the new Mad Max movie? Wasn’t it already being rhapsodized about in reviews even before its release to the general public? Some critics got so het up they snuck through the reviewing embargos because they couldn’t contain their enthusiasm. It’s amazing what effect pumped-up post-apocalyptic motorized mayhem can have on some folks.

(It seems I was the only woman at the screening, though my hopes rose when I saw a sister film-lover a few rows ahead of me, but it turned out to be a long-haired guy with a goatee beard…)

George Miller’s post-apocalyptic landscape was first introduced to audiences in 1979 in the Australian actioner Mad Max, re-established in the 1981’s The Road Warrior and last seen in Mad Max Beyond Thunderdome in 1985. With Fury Road, director Miller returns to the lawless, fuel-deprived future of his seminal series for the first time in three decades. Each movie has been more successful than the last and subsequently has had more money to spend. Granted a generous budget of millions, Miller has finally had the opportunity to put the Mad Max he could only dream about in his fledgling years up on the screen. 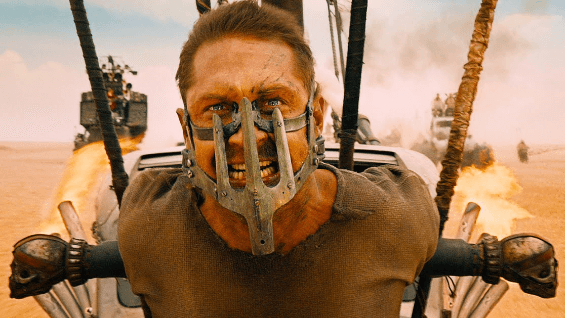 Many directors have found this kind of studio funded wealth to be their nemesis, and have often lost their core audience by overreaching themselves and getting lost in the alluring world of digital enhancements and special effects. I’m pleased to report that George Miller cannily sidesteps this pitfall and sticks with what made his Mad Max series so unique in the first place. He pours the money into the lost art of daredevil stunt work and pyrotechnics – the vehicular mayhem, the smashes and crashes are, by and large, the real thing.

Fury Road offers us one arresting image after another: warriors on swinging poles, bikers dropping bombs as they jump over moving cars, spiked dune-buggies like wheeled porcupines on speed, sedan frames set on top of tanks, trucks flipping through the air, rusty steel frames scrunching up or exploding. On the roofs and hoods of these crazy, patched-together, speeding war machines, post-apocalyptic savages battle with blades, pistols, sawn-off shotguns, hooks, chainsaws, or fists. The dizzying desert sky and rolling red sands look stunning on the big screen. 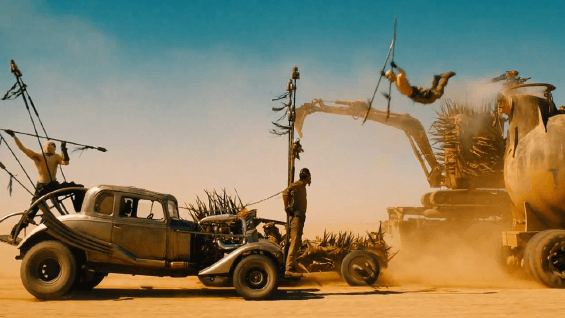 Providing the martial soundtrack to spur the troops onto the onslaught is an expansive percussion section of jungle drummers and a mutant guitarist blasting out metal riffs and supported by a brace of bungee cords. It must surely be the best job of the lot – being the wild axe-wielder in front of a towering bank of amps (axe in this case meaning a flame-throwing guitar pumped up to Nigel’s number eleven) – I’d sneak that job if I could. All this din becomes a veritable symphony of combustion.

Max himself is, as ever, a man of few words, Tom Hardy now taking over from the young Mel Gibson. Hardy’s Max is pretty patently mad, having visions of his slaughtered family and possibly suffering from some form of PTSD. We first see him standing beside his familiar 600HP, V8 Interceptor, staring out across the desert plain, chewing on a mutated two-headed lizard as he contemplates what’s become of the scorched Earth (we learn in news bulletins played over the film’s opening credits, that it’s been laid to waste by wars for oil and water, finishing in a thermonuclear explosion). His world has long regressed into barbarism, as humanity’s impulse to survive has become perverted by rapaciousness and brutality. 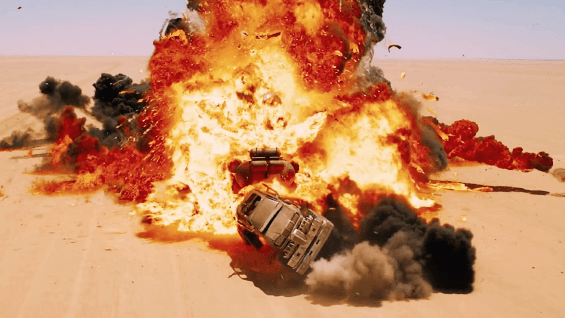 Within the first few minutes, Max is captured by Immortan Joe (Keays-Byrne, aka Toecutter from the ’79 film), the bloated and diseased leader of an army of white-painted War Boys who, hyped-up on pseudo-religious fervour and riddled with a wasting sickness, use normal humans as living blood-bags. The boys cling to the herd mentality and are disposed to believe any heroic myth spouted by their alpha-male. In Mad Max 2: The Road Warrior, gasoline was the lifeblood of post-apocalyptic society; now water is also a scarce commodity, a supply of which Immortan Joe controls, keeping the starving, rag-tag populace thirsty and in his thrall.

Women have never had it easy in the post-apocalyptic wasteland – that world inevitably tends to revert to an oppressive patriarchal structure, and the threat of male violence and sexual violation constantly hangs over them. Immortan Joe keeps large-breasted women as milking stock and also incarcerates a group of young women for sex and impregnation. However, it seems that even the supermodel-types cushioned within the leader’s harem eventually get fed-up of being treated as sex-objects and breeding stock. In his fourth Mad Max instalment, Miller allows the women to take centre stage and finally fight back – which brings us to Charlize Theron’s remarkable performance as the one-armed warrior-woman Furiosa. 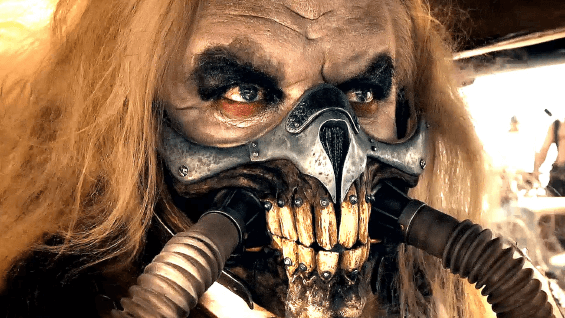 Furiosa is Fury Road’s heart and soul—her escape with the young wives is not just a flight from the unwanted attentions of the domineering and repulsive Immortan Joe, but a search for a refuge from the madness and tyranny of his world. These women are hell-bent for a better place where they can feel safe and free. Miller has never shirked from projecting difficult issues into his violent and dystopian visions of the near-future. The action set pieces may be what grab the attention, but the main themes are not marginalized – indeed, Fury Road maintains the theme of personal freedom at the forefront. “You can’t own people” is a sentence often repeated, and the harsh question “Who killed the world?” is here posed by the women and aimed at the men. Some of the fundamental questions familiar from the previous movies are also reiterated: Where are we going? How do we cope when our resources become scarce? How can we live together in a civilized way?

After getting caught up in the wild vehicular action of Fury Road, I managed to resist the urge to drive back home whooping like a maniac, but I was uncomfortably struck by just how many cars there were around me – streaming along the road, parked on both sides of the street, filling the driveways, squeezed up on pavements – I certainly saw a lot more cars than I saw people. It’s a sobering thought to see just how deeply dependent we already are on oil, and one day, it will inevitably run out, and what will become of us then?

[amazon asin[uk]=B00QKS2CJI&asin[us]=B00XQ13ZSO&text=Ant-Man (2015) is available to buy from Amazon]; and if you decide to make a purchase after following this link you will have supported Attack From Planet B, so thank you.