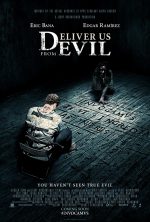 2014’s Deliver Us from Evil is the rare horror film that feels made for grown-ups. The market tends to favor those genre flicks that leave teenagers quaking in their Hot Topic-branded boots, but once in a while, something will feature adults having their entire belief systems challenged by unexplained forces. Deliver Us from Evil carries a hardened vibe, attempting to replicate what it might be like if the supernatural really made itself noticed in modern times. In the end, though, this translates to the movie pushing its “this is totally based on a true story, you guys” angle extra hard, and the more it does so, the more abundantly clear its huckster ways become. I’ll certainly forgive Deliver Us from Evil for putting on a straight face and wanting to bring fear back to fright films, but it doesn’t put very much effort into disguising its status as the sort of the flick that ends exactly as you predict it will after seeing just five minutes. 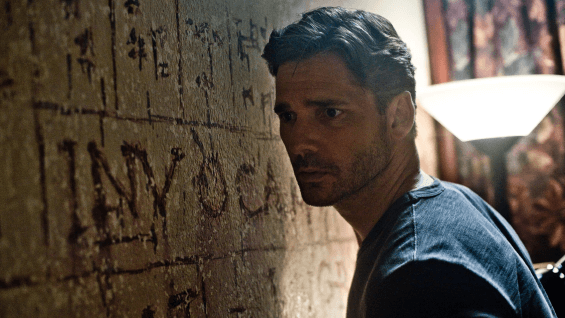 Ralph Sarchie (Eric Bana) has seen a lot in his day. As a member of a special streets crimes unit stationed in New York City, it’s his job to stare humanity’s scummiest side straight in the face on a nightly basis. Such a career has taken a hefty psychological toll on Sarchie and begun straining his relationship with his wife (Olivia Munn), but nothing he’s ever encountered has prepared him for the grisly case about to be dropped in his lap. Strange occurrences have been happening on his beat, with people running about in animalistic states and inexplicable phenomena manifesting itself. Being a creature of logic, Sarchie is certain that there’s a valid reason behind these events, but it’s not until he meets Father Mendoza (Edgar Ramirez) that his eyes become opened to the possibility of an otherworldly option. While the idea seems far-fetched, the horrors that Sarchie bears witness to convince him more and more that demonic forces are converging upon the Big Apple, compelling him to fight back before the city is transformed into the devil’s playground. 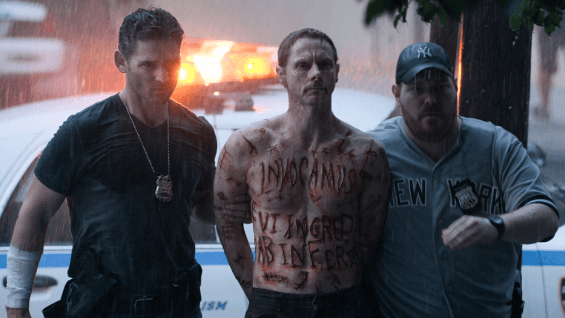 For a movie made by folks well-versed in horror, Deliver Us from Evil sure makes a whole lot of rookie mistakes. It was directed and co-written by Scott Derrickson, who previously helmed the very good Sinister and The Exorcism of Emily Rose. These pictures had their commercial aspects, but there was still enough plausibility and sturdy storytelling present for them to unsettle audiences in their own ways. But whether it was mandated so by Derrickson or producer Jerry Bruckheimer, Deliver Us from Evil‘s desire to come off as even more of a crowd-pleaser only leads the film to its downfall. The movie is traditional to a fault, with little in the way of surprises or character arcs that aren’t telegraphed from several country miles away. From the minute you lay eyes on the faithless Sarchie, his wisecracking partner (Joel McHale), and the noble Father Mendoza, you know precisely what’ll come of each of them, with the film happy to give viewers nothing less than just that. As the script is ruled by such staggeringly predictable personalities, its only other draw is its “based on a true story” conceit, which emits a bologna-like scent from the get-go. Yes, Virginia, there is a real Ralph Sarchie, but the story used for this flick is a complete fabrication, which makes you ponder how effectively and easily Derrickson could’ve created a straight crime drama set within New York’s most decayed corners. 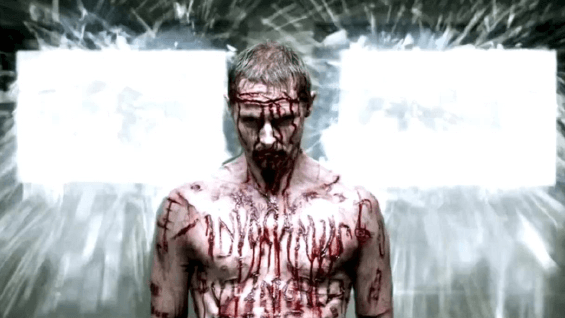 Deliver Us from Evil is also one of those movies whose imagery is so oppressively gloomy, it shatters any illusion of realism in a heartbeat. Just about every frame comes complete with eerie voiceovers, pale nutbags hissing at you, or dimly-lit corridors for our heroes to slink down. This isn’t to say the enterprise is devoid of the heebie-jeebies, what with its creepy usage of tunes by The Doors and the sight of possessed dudes burping up gray goop being inherently freaky. But the constant dread being shoved at you reeks of trying way too hard and feels as if it’s covering up for how little suspense the plot actually holds. But in all fairness, the movie’s look does have its grimy charms, and the ensemble cast does everything in its power to elevate the material to a proper level of intensity. Bana’s presence is as intimidating as his New Yawk accent is gleefully over-the-top, and Ramirez is convincingly wise as Mendoza, with the two balancing each other out nicely and making for a fun pair of demon-busting bros (even if the actual Mendoza turned out to be two Irish priests). Munn gets very little to work with as Sarchie’s long-suffering wife, but McHale lands a couple good sarcastic zingers (as well as display his surprising knife combat chops), and Sean Harris makes a creepy impression as our lead boogeyman.

I apologize if I’ve made Deliver Us from Evil out to be an irredeemable train wreck, because it really isn’t. There’s quite a bit of good here, from the mostly solid acting to some spooky visuals, but to see so much ambition go into making something this routine is a bummer of rather sizable proportions. Buried within Deliver Us from Evil is a nugget of what could be a fascinating and chilling supernatural drama; it’s just literally had the hell overproduced out of it.

Deliver Us from Evil (2014), directed by Scott Derrickson.
Written by Scott Derrickson and Paul Harris Boardman.
Based on the 2001 book Beware the Night by Ralph Sarchie and Lisa Collier Cool.
Starring Eric Bana, Édgar Ramírez and Olivia Munn.