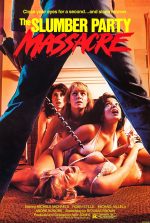 Released in 1982 by New World Pictures, The Slumber Party Massacre is an exploitation film directed by Amy Holden Jones and written by novelist and feminist activist Rita Mae Brown. Brown originally wrote The Slumber Party Massacre (under the titles Don’t Open the Door and Sleepless Nights) as a parody of the slasher sub-genre, but Jones direction adapted the material as a straight genre film under the instruction and watchful eye of the legendary Roger Corman.

When 18-year-old high school senior Trish’s (Michelle Michaels) parents leave town for the weekend she decides to take advantage of their absence by hosting a slumber party in the now empty house; inviting friends and teammates from her high school basketball team. New girl Valerie (Robin Stille) is also invited but declines after she overhears the other girls talking cruelly of her, instead opting to spend the evening babysitting her younger sister Courtney (Jennifer Meyers). 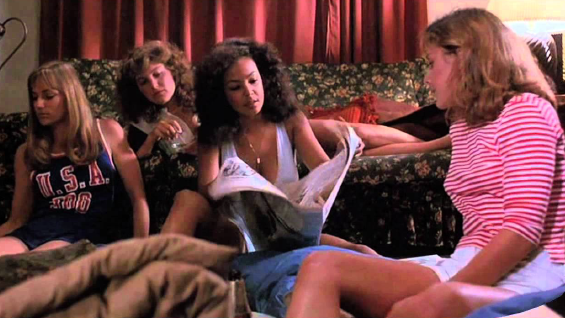 Meanwhile in recent news; the mentally unstable, convicted murderer Russ Thorn (Michael Villella) has escaped from prison. Armed with a power drill Russ watches from a distance as the girls leave the school. Linda (Brinke Stevens) realises that she has left her test book behind, and quickly returns alone to retrieve it. In the empty school corridor Russ attacks Linda, penetrating her with his oversized and impractical power tool, leading to a chase that ends in the shower room with Linda’s piercing screams…

That evening Trish and the rest of the girls begin their slumber party, quickly stripping down to their underwear. This is appreciated by the boys that peek through Trish’s window, having learned of the party at school. As the night continues however, Russ Thorn makes his presence known turning this slumber party into a massacre. Valerie, who lives nearby, is pestered by her sister Courtney to crash the party. At first she protests, but then receives a phone call which quickly changes her mind… 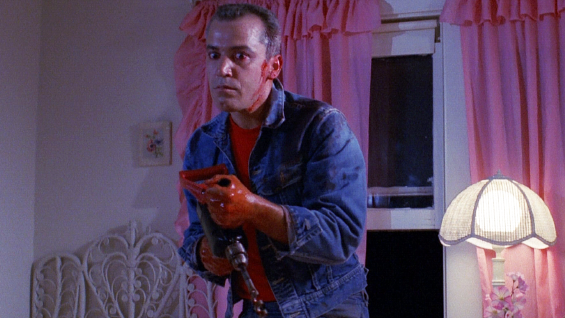 The Slumber Party Massacre is an enjoyable romp that satirises the slasher sub-genre, but one that ultimately suffers a loss of suspense as a result of the killer’s early reveal. Thankfully for slasher fanatics Michael Villella is a force to be reckoned with. Villella’s eerie expressions punctuate each and every scene he appears in which are guaranteed to leave a lasting impression.

Amy Holden Jones direction is expertly crafted despite the film’s low budget and requirement from Roger Corman to add T&A to the proceedings. This addition, a usual mainstay of the slasher sub-genre, seems confused and almost out of place here in a film that, although meant to be taken seriously, is still rife with humour (intentional or otherwise) from a script intended to be a parody. With that said The Slumber Party Massacre is a recommend midnight movie for slasher fanatics with a sense of humour.

[amazon asin[uk]=B003THSXJ6&asin[us]=B00GSTHD1G&text=The Slumber Party Massacre (1982) is available to buy from Amazon]; and if you decide to make a purchase after following this link you will have supported Attack From Planet B, so thank you.