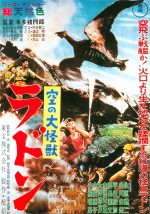 This review will focus upon the original 1956 Japanese release of Rodan! Rodan was also recut and re-released in 1957 for western audiences.

Thundering out of unknown skies came the super-sonic hell-creature no weapon could destroy! It was Rodan! The Flying Monster! Produced by Toho Studios and released in 1956, the Ishirō Honda directed Rodan is one of studio’s first kaiju eiga (monster movie) to be filmed in colour, which is used to great effect due to the attention to detail that both Ishirō Honda and special effects director Eiji Tsuburaya had employed.

In the small mining village of Kitamatsu, on the outskirts of Kyushu and Mount Aso, two miners are presumed missing or dead after a mineshaft was flooded. With the help of the other miners, Chief Engineer Shigeru Kawamura (Kenji Sahara) enters the mine to investigate and soon discover the lacerated corpse of miner Yoshizo (Jirô Suzukawa). With the second miner, Goro (Rinsaku Ogata), still missing the village community begin to suspect that Goro may have been involved in Yoshizo’s death. The two miners were known to fight amongst each other which only fuelled the rumours.

Two more miners and a police officer are asked to guard the only entrance to the mine so, if the rumours are to be believed, Goro has no choice but to surrender if he wants to leave. However it is not long before they become the next set of victims to the mine. It is murder of the most violent nature but surely these deep lacerations can’t be the work of a man? 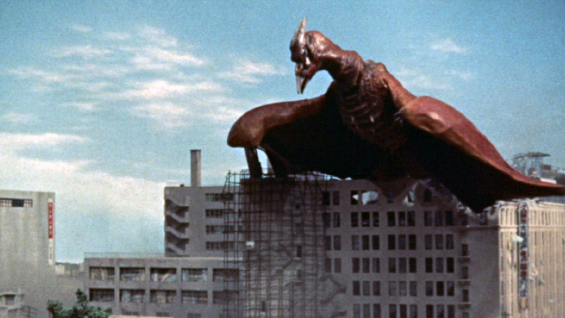 The news of this grotesque encounter soon spreads around the community who place the full blame on Goro. Goro’s sister, Kiyo (Yumi Shirakawa), upset that such rumours are being spread around is visited and comforted by Shigeru at her home, who is unconvinced that Goro would not be capable of such crimes. As the two sit together, with growing affection for each other, a gigantic insect resembling a dragonfly larva enters Kiyo’s home forcing both Shigeru and Kiyo to flee. Quickly Shigeru calls for help and leads a group of police officers and miners to Kiyo’s home, where they are confronted by the creature and forced to flee. Shots are fired, and the alarm is set to evacuate the village.

Regrouped, and led by Shigeru, they chase the creature through the village and to the top of a hill where they open fire once again. The monster, aggravated, launches itself at two officers armed with machine guns, killing them both. The answer to the question of who, or what, had murdered Yoshizo and the others has suddenly revealed itself!

With the creature taking refuge in the mine Shigeru, now with the support of the national guard, must head back through the mineshaft in an attempt to confront the monster and discover the true fate of Goro. As they plunge deeper within the mine they soon discover the lacerated body of Goro and what appears to be a entire colony of these gigantic insects! But before either Shigeru and his men, or the insects can attack the mine begins to cave in around them, causing Shigeru to become trapped and unconscious!

Once Shigeru regains consciousness he realises, to his horror, that he is surrounded by hundreds of the creatures, who appear to have survived underground. Worse yet, in the distance is a gigantic egg, which all of a sudden hatches! From out of the fractured shell emerged a gigantic, winged creature resembling a prehistoric reptile, similar to a Pterosaur. From this egg emerged Rodan! 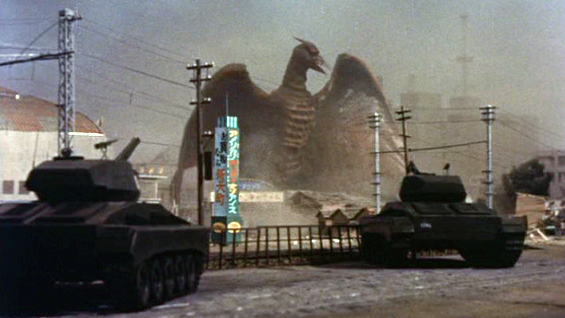 Rodan is rooted in realism despite it’s preposterous premise, thanks to writer Ken Kuronuma, and screenwriters Takeo Murata and Takeshi Kimura’s script. Ishirō Honda’s attention to detail and his serious approach to the subject matter have helped to elevate Rodan above other kaiju eiga produced around the same era, including the first sequel to Godzilla; Godzilla Raids Again (1955). Even the muted colour scheme, reminiscent of the woodcut prints of Hokusai, evokes an image of nuclear desolation during a period where nuclear threat was very much still in the minds of the Japanese populace. Rodan itself, a creation born from nuclear experimentation, is symbolic of this era.

In the United States Rodan was recut and re-released in 1957 under the title Rodan! The Flying Monster! Produced for western audiences by The King Brothers, this version of Rodan removed certain scenes of personal interaction and replaced much of the dialogue with narration read by a young George Takei (later known for his breakthrough role as Hikaru Sulu in Star Trek).

Unlike later kaiju eiga Rodan should be taken very seriously. This is a cult classic, that is entertaining from the moment the iconic Toho Studio production logo appears to the highly emotional ending, and personally is only surpassed by Ishirō Honda’s Godzilla (1954).