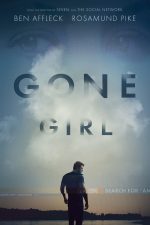 No-one in this movie comes out looking good – no-one – and isn’t that so very ‘David Fincher’? It’s not so much that Fincher likes to cast an unsympathetic eye over human frailty to highlight his pet themes of personal responsibility, slavish mob-gullibility and our own passive-aggressive ways, but with his coolly detached viewpoint he tends to brandish the cinematic scalpel to slice open human guts to show us some rather diseased insides. But boy, doesn’t he do it with chilly wit and style!

Gone Girl is a thriller based on the best-selling novel by Gillian Flynn who, as a successful author, gets the rare chance to adapt her own book for the screen. This turns out to be a good decision and a convincing argument for allowing authors to adapt their own work. Fans of the book may be frustrated by all the things the movie inevitably simplifies or omits but it’s a rare case that a movie’s quality matches that of the book. This one does so, as much as it is possible in these differing artistic realms. 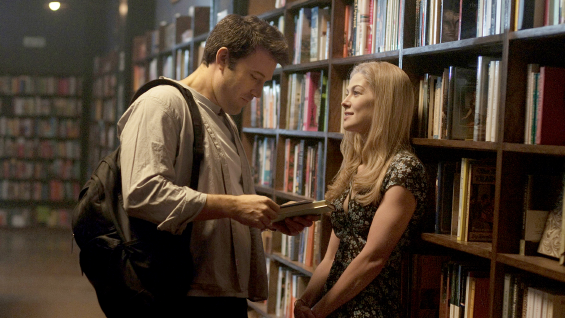 The second good decision was hiring David Fincher to direct. He’s a filmmaker who works with a bleak and cynical eye which, in this case, is perfect for Flynn’s uncompromising tale. Gone Girl has arrived at a time when there’s considerable cultural discussion about misogyny and violence against women, and it embraces those themes in a particularly disturbing fashion which I cannot elucidate upon without resorting to spoilers, but is particularly interesting for having been written by a woman.

Gone Girl is less of a whodunit and more of a whodunwhat to whom and how exploitatively. For nearly two and a half hours viewers are flipped between sympathy and disgust for the major characters – a feat of audience manipulation that only someone who had written these inherently manipulative characters in the first place could pull off. Both of the main protagonists, two deeply dysfunctional marital partners, come across as alternately affecting and diabolical, convincing and untrustworthy, appealing and appalling, until the whole convoluted maelstrom comes to a shocking climax, and then some. With its twists, turns and swerving switchbacks, the insidious story keeps the viewer on ever-shifting ground. This movie serves as a reminder that a skilfully played drama can be as absorbing as a high-budget superhero film, and that all of the most explosive CGI spectacles cannot better a strong and engaging storyline well-told. 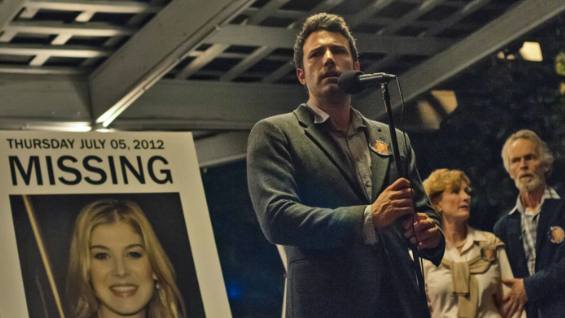 Ben Affleck stars as Nick Dunne, who returns home on his fifth wedding anniversary to discover that his wife Amy (Rosamund Pike) has gone missing. As the missing persons investigation turns into a possible murder plot, and the public involvement in the search for Amy increases, Nick is put under the media microscope where his every grin or sidelong glance is seen as evidence of his possible guilt. We observe Nick through his interactions with the police (Kim Dickens as the lead detective) and with his twin sister Margot (a terrific Carrie Coon, as close to a sympathetic character as we get). Fincher’s unswerving presentation of the relentlessly shallow media circus, and a public salaciously riveted by the prospect of a freeloading, unprincipled man who might have murdered his lovely, blonde, successful princess of a wife – won’t be surprising to anyone who has seen any previous Fincher movies or, for that matter, has ever paid attention to the TV news. More interesting are the private moments in which a seemingly happy marriage begins to unravel with the catalyst of economic recession and unfulfilled expectations, as the film delves into Nick and Amy’s promising beginning and their increasingly dark and convoluted ending. 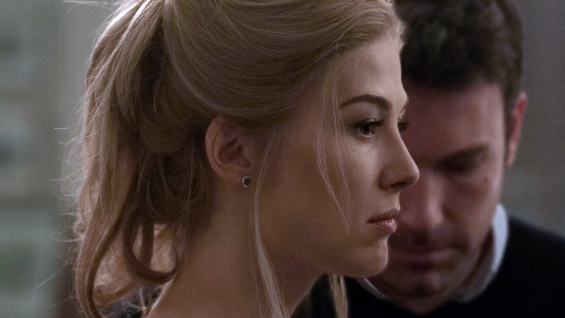 Much of what we initially learn about Amy comes from flashbacks and her personal feelings via a diary exposing the mindset of a young woman who thought she was destined to be “important” and loved because of her upbringing and society’s expectations. As in ‘Fatal Attraction’ – it is an act of infidelity that sets the entire shitstorm into motion. There will be some discussion regarding Gone Girl‘s portrayal of women. The film (and the book) offers more than the usual amount of female characters, all of which are unique personalities with different agendas. (This movie also shows the advantage of having a variety of differing female characters – the fact that a single female is not expected to represent an entire gender over the duration of the plot adds much to the nuances of the storyline and colour to the charaterizations).

Fincher has proved to be pretty adept at casting, and here Ben Affleck provides a good balance in portraying Nick – his facial blandnesss as an actor working in favour of a character designed to be inscrutable, unreliable, deceitful, though too simple to be entirely conniving. Rosamund Pike as Amy, however, is a revelation. The actress gets the role of a lifetime as the complex, unpredictable, enigmatic and formidable Amy Dunne. She rises to the challenge.

I found the gender politics of Gone Girl troubling on some levels. Whereas the book was a Henry James-like portrait of two monstrous people who can seemingly never escape each other, wrapped in a mystery plot, the movie seems to be a technical exercise in satire about the empty hunger of the media age. It’s not a feel-good movie and certainly not the best ‘date-night’ movie I could suggest, but it is nonetheless undeniably gripping.

[amazon asin[uk]=B00JLC4W0C&asin[us]=B00Q5996EQ&text=Gone Girl (2014) is available to buy from Amazon]; and if you decide to make a purchase after following this link you will have supported Attack From Planet B, so thank you.