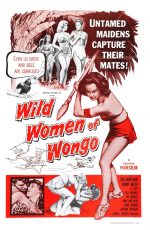 This film, with all of its 1950’s ignorance about women and sex, is easily one of the most outlandishly offensive movies I’ve ever watched – and I can’t say I hated the experience. It opens with narration from Mother Nature, who explains that once, her and Father Time decided to team up and “experiment” on humans for seemingly no good reason whatsoever. The two tyrannical ‘parents’ create the people of Wongo and the people of Guna; on Wongo, the women are stunningly beautiful creatures, while the men are brutish and ugly, while on Guna, it is the exact opposite. As a viewer this pressed me to ask the seemingly overlooked question, “Why?”

The two tribes of people last generations without ever realizing that they could be having sex with people in their same league, until one of the men from Guna arrives at Wongo, asking for help against the ape-men who have attacked their village. Immediately, the women of Wongo stare with mouths agape that there are men in the world equally as beautiful as them, and decide that they must pursue the Guna men as mates. The film proceeds to include a haphazard plot with a dragon god, have numerous instances of incredibly sexist dialogue, and as most great pictures must include; an extended dance sequence and a sassy talking bird.

By the end of the film (Spoilers! Even though it’s been fifty-six years), after what seemed like maybe the beautiful people would realize the shining inner qualities of their ugly tribal mates, I was mildly disappointed that the film took the more offensive “we learned nothing from this entire experience” route. After several cloth-rippin’ fights and clearly-readin’ monologues; the beautiful women all end up with the beautiful men in the cheesiest way possible; standing together and winking at the camera while music plays.

I recommend The Wild Women of Wongo for those who can find the humour in the questionable morality towards gender in the late fifties. Because it’s arguable that the point of this film was not to create a stunning plot (or even a necessarily good plot), but instead to just showcase a bunch of babes fighting and tearing each other’s leopard print bathing suits off, it becomes somewhat forgivable in its nature. Although, even with this in mind, some lines made me wince just as much as they made me laugh, such as, “you are only a woman, you do not understand men,” or when one of the Guna men criticizes the Wongo women’s unsatisfactory seasoning of the meat that they prepared for dinner. This movie is funny, it is cheesy, and it is in the poorest of poor tastes; but really, who doesn’t like a little T&A?

The Wild Women of Wongo is available on DVD (Region 1) from Amazon.co.uk; and if you decide to make a purchase after following this link you will have supported Attack From Planet B, so thank you.