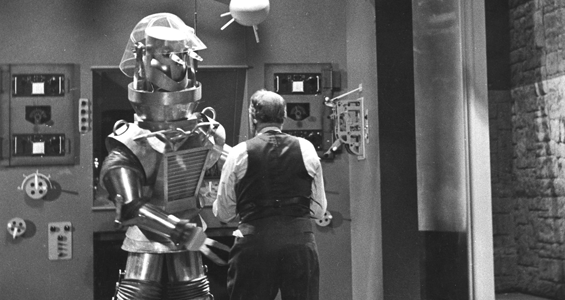 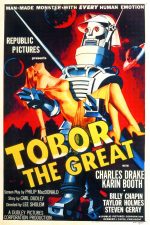 Hyperbole, thy name is Tobor the Great. The movies are no stranger to hucksterism, and that goes double for science fiction, whose creations have so often promised soul-curdling journeys and delivered papier-mache monsters. But going by the Tobor the Great DVD that Lionsgate was courteous enough to release out of nowhere a few years back (seriously, where the hell did this thing come from?), you’d think that this B-grade jaunt was no less than 1954’s equivalent of The Terminator. The reality involves fewer campaigns of terror than it does thought-provoking introspection, as this picture prefers to give its ideas a good ponder instead of blasting them into space dust. It’s still a minor footnote in the sci-fi genre, but the film does have its charms — little of which have to do with the big scrap heap it’s named after.

Tobor the Great is set during that chapter of the space race when we were still trying to figure out how us humans could survive being hurled into the cosmos. The tests that these prospective astronauts are subjected to have a knack for being unforgiving, and Dr. Ralph Harrison (Charles Drake) has had enough. Harrison is sure that there are ways to explore beyond the infinite that don’t involve putting our boys’ lives on the line — and fortunately, Professor Nordstrom (Taylor Holmes) agrees. A fellow scientist who’s just as eager to reach for the stars as anyone, the prof has invented the most technologically-advanced means of doing so yet: Tobor, a sophisticated (if decidedly chunky-looking) robot capable of responding to and exhibiting emotion. It’s hoped that Tobor could become man’s next step towards expanding its presence into the heavens…but only if Harrison, Nordstrom, and company can protect him long enough from enemies who want to steal his secrets.

If The Day the Earth Stood Still were all about getting Gort to work, it’d probably look a little something like Tobor the Great. For all of its talk about space exploration, artificial intelligence, and even psychic phenomena (yep, the robot’s telepathic, too), the film retains a personal edge, a smallness that makes its huge ideas a bit easier to relate to and digest. Its protagonists’ worries may be a touch overblown (Harrison apparently considers astronauts passing out in a centrifuge tantamount to slaughter), but its heart is in the right place, displaying an optimism that’s a change of pace from the era’s standard-issue rampaging monsters. Unfortunately, this means that Tobor the Great doesn’t always have the most pulse-pounding of plots. Waxing scientific holds sway over a kid’s imagination for only so long, so the flick eventually rustles up some enemy agents of vague foreign origin to try and abscond with the titular titanium titan. It’s not much, but it’s a low-key crisis that’s not overtly goofy and fits right in with the easygoing pace at which the film goes about its business.

Oddly enough, one of the least interesting things about Tobor the Great is Tobor himself. He’s the product of special effects royalty Robert Kinoshita, the man behind the robot from “Lost in Space” and Forbidden Planet‘s legendary Robby. But for whatever reason — be it because the character is voiceless or his design is too unwieldy for its own good — Tobor never develops a personality of his own. Nordstrom’s gadget-obsessed grandson (Billy Chapin) imprints like hell on the big guy, but it’s anybody’s guess as to why, since it looks about as welcoming as hugging an air conditioner. Still, I shouldn’t be so hard on the metallic lug, since the efforts of our friendly neighborhood scientists to keep Tobor’s emotional responses in check are essential to not only how he maintains his cool in space but to how he stops the earthbound bad guys, too. Our cast is the usual assortment of lantern-jawed heroes in suits, eccentric professors, and children bent on gee-whizzing their way into our hearts, but there isn’t a spoilsport in the bunch who isn’t game for giving it their all in a concept as silly as this.

I wouldn’t go so far as to deem Tobor the Great a gem unfairly swallowed up by obscurity, but it certainly has a leg up on a lot of the disposable drive-in fare of the time. It’s affectionately low-rent, overcoming its financial limitations by emphasizing its sense of discovery more than getting bogged down in a lot of shallow action.Tobor the Great is a perfectly pleasant watch, even if its eponymous android has a little rust around the edges.

Tobor the Great (1954) is available on DVD (Region 0) from Amazon.co.uk; and if you decide to make a purchase after following this link you will have supported Attack From Planet B, so thank you.