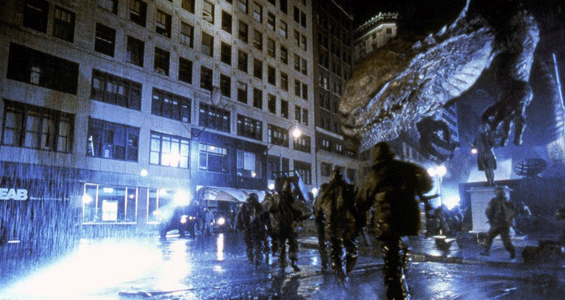 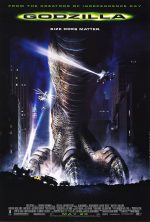 1998’s Godzilla ranks right up there with The Phantom Menace as one of the most despised cinematic entities of the decade. There’s nary a forum to turn to on that bastion of civil discourse known as the internet where you won’t find someone reacting to this schlockbuster as if it force-fed Destoroyah droppings to Ishiro Honda’s grandkids. I had a ball with it upon its release (hey, I was 13, and monsters were trampling stuff — of course I was entertained), and while my views cooled upon repeat viewings, I’ve always maintained that this American-made take on the king of all kaiju isn’t all that awful. But with some time having passed since my last look-see and with Warner Bros. bringing the atomic lug back to theaters this summer, it felt like a proper revisiting was in order. Is Godzilla deserving of all the bile that’s been directed at it over the years? Well, while there’s no questioning that it’s a pretty terrible flick, the reasons why it’s bad aren’t too far off from why the lesser of its Japanese counterparts are the way they are.

From the depths of the Pacific Ocean, a menace mutated by nuclear testing has decided to rise. A reptilian creature has survived round after round of atomic meddling, swelling in size and strength until every giant monster’s innate desire to cause damage kicks in. After gulping down a couple fishing trawlers for an appetizer, the beast heads to New York City for the ultimate all-you-can-chomp feast. But the Big Apple has nothing to fear, for a ragtag crew of character actors is hot on the towering terror’s trail and working around the clock to find a way to take it down. From biologist Niko Tatopoulos (Matthew Broderick) to shady French spook Philippe Roache (Jean Reno), the humans race to see what makes the creature, christened Godzilla (or “Zilla,” if you’re going by Final Wars rules), tick before further damage is caused. But the city that never sleeps is about to have more than a few toppled skyscrapers on its hands, for Niko and his team soon learn that Godzilla has also brought his entire monstrous brood to town.

Godzilla is a cartoon come to life, and considering that this is director Roland Emmerich’s thing, there’s no reason to have expected any differently of it. Emmerich’s penchant for mass-market entertainment is ingrained in his body of work, with virtually everything he’s helmed having been made to appeal to as many butts in seats as possible. The man thrives in simplicity; the easier a movie’s story and characters can be packaged for foreign audiences, the better. In the case of Independence Day, this was a good thing, since its ensemble of stereotypes became part of its rousing, old-fashioned tribute to alien invasion flicks. But Godzilla‘s humans are drawn so thinly and left with over two hours to play off of the one personality trait each of them gets, giving the slightest damn about their fates just isn’t gonna happen. Of course, even Toho itself was guilty of similar practices, with some of the Big G’s Japanese outings dominated by people talking about what to do with the very monsters these flicks shoved to the sidelines. Still, the levels of apathy that Emmerich reaches with his cast of characters are staggering all the same, as nearly everyone is too cliched (hah, those New Yorkers sure are jaded, huh?) to identify as human beings.

Okay, so no one cares if Broderick will get back with his reporter girlfriend, and Hank Azaria is one “fuhgeddaboudit” away from embodying every Italian trope known to man. But, when all is said and done, how does Godzilla stack up as the celebration of pyrotechnics and destruction that folks hoped for when they bought a ticket? Well, that’s a mixed bag all its own. The build-up to Zilla’s full reveal is actually quite effective, with a small handful of attack scenes shrouding the big guy in mystery and ominously setting the stage before he takes Manhattan in the first of many rampages. But the movie quickly settles into a pretty lethargic routine of Zilla sowing a bit of chaos, getting chased by the military, and vanishing into thin air, only to pop up and repeat the process every fifteen or so minutes. I love my city-stomping as much as the next guy, but it’s all so boringly-presented here, capping off with a particularly prolonged final act that comes across as an endless series of false endings. As for the revamped King of the Monsters, despite some CG that hasn’t held up very well, I kind of dig the new design; this Godzilla is closer in nature to an overgrown animal, faster and able to skitter about the cityscape with greater agility. He’s not the Big G we know and love, but it’s a different look that’s cooler than people give it credit for. Having watched it with an affinity for wanton violence more refined than in my teenage years, I can see what made Godzilla so crushing of a disappointment. All the cash and promotional tie-ins they could throw at the thing had no chance of making it a better movie, yet it retains in what overblown action sequences and one-note characters that don’t make your eyes roll an amusing cheese factor. 1998’s Godzilla will probably go down as the worst thing America will ever do with the beloved behemoth, but the franchise as a whole has sunk to worse lows than this.