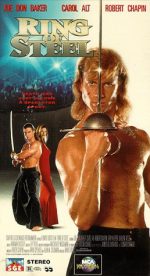 Now there is a plethora of arena style movies available for the film buffs consumption. If it is not Lou Ferrigno fighting for his life in The Cage then it is aliens fighting aliens in the 80’s schlock fest Arena or the classic Jean-Claude Van Damme action movie Bloodsport the genre is constantly looking for new ways for hulking man beasts to smack the crap out of each other. In Ring of Steel it takes the genre into a different approach from the more testosterone fist smashing against skulls films of old and throws in some sword fights for your money. Not just swords in fact they throw in a bit of kung fu for your amusement and just like the rabid crowd of rich viewers who watch the fights in the movie you to will be lapping it all up.

Plot wise this movie has a nice, yet predictable set up. Recently dumped from his sword fighting job Alex Freyer is at a low ebb after killing an opponent accidentally in combat tournament. Luckily his sadness is short lived as the mysterious man in black offers him a job at his club the ring of steel, where it’s no hold barred sword fighting with no rules and money on the line. Alex gets dragged further and further into this new fighting arena much to the chagrin of Alex’s squeeze Elena who much like the audience can see where this is going and knows it is going to go pear shaped. Alex is a little bit too nice for the Man in Black’s eyes and needs to know who is boss so he adds a little bit of an incentive to the deal, he kidnaps Elena and keeps her in storage until he is happy Alex is on board. You would think Alex would be slightly more miffed about the whole thing but he soon perks up when he gets to pick a fancy sword to fight with. Alex now enters the tournament with a heck of a lot more to lose, especially with arena thug and champion Jack on his tail, not happy that this young upstart is after his place and that Tanya, Jack’s woman is also interested in Jack’s sword skills in the ring and in the bedroom! How far will Jack go into this alluring new life style before it is too late?

The use of different swords and different types of fighters really does help to mix this film up and make it a lot more entertaining than some of the other movies of the same ilk. They are also interspersed with the film in just the right quantity so you never get bored of watching too many fights or too much talking. The action scenes are kept quite short but this does help to make them not out stay there welcome. My personal favourite involves Alex and Brian camping it up in an Errol Flynn kind of way and having a heck of a time doing it. The film builds up to the big Alex versus Jack fight and it does not disappoint, with swirls, jumps and sword play a plenty throughout. They then do the cool thing of taking the fight out of the arena into a warehouse setting and adding some gun play giving us two main fights for the price of one. With all the sword fights you may have flashbacks to Highlander (especially as all the fighters have theatrical style costumes on) but they will fade soon enough as the film takes an identity of its very own.

The characters are interesting enough with Robert as Alex being entertaining in the lead though his incredibly distracting mullet sometimes takes your mind of his character arc. Seriously that thing is epic. Jim Pirri as Brian could very easily have become the annoying sidekick but actually comes off as quite likable, with an almost Inigo Montoya vibe going on with his character. It would have been nice to see more from Gary Kaspar as Jack, the muscled up fighter and Alex’s enemy as he is a lot of fun when he comes on to chomp the scenery. Darlene as Elena is also not really given much to do but she is great on screen when she is doing it and does have a nice scene near the end. Joe Don Baker steals the show as the Man in Black though, with his evil grin and temperament that switches at the click of a finger, he owns the screen and really makes you want to smack his smug face in whenever he makes an entrance. I do not know if this is implied by accident or not but there is almost a sub plot going on here that the Man in Black may have some kind of supernatural element to him. The scene at the end of the film has him trying to once again get Alex to come over to his way of thinking, sees him depart into the burning building. Then later we see him retrieve his historical weaponry back from the ashes so he can no doubt start a fresh. Could just be me!

Though there is an element of darkness with in this movie, it is not half as bleak as some of the other movie’s like this I have encountered and there could be a reason for this. According to IMDB (link) Robert Chapin’s original script was to take a much darker turn, with him getting so out of his mind in this new world of underground pleasures that he forgets who Elena is when he sees her next. Maybe that would have worked better, maybe not but in 1994 all we know is that MCA/Universal were not quite ready for this vision and softened it up to make it more upbeat. It actually works in the films favour to be honest, making it easier to enjoy the fun of the fighting scenes and not get depressed with all the pathos. In fact the one scene that is quite tragic seems slightly out of place with the film and for me anyway did not quite work. Overall though, this film is an incredible amount of fun. Sure it is not the most original movie out there and it follows all the plot devices you would expect, but man it hits them perfectly. Some great fight scenes mixed with some fun acting makes this a great pop corn flick to settle down to when you fancy a change from watching Bloodsport.

; and if you decide to make a purchase after following this link you will have supported Attack From Planet B, so thank you!