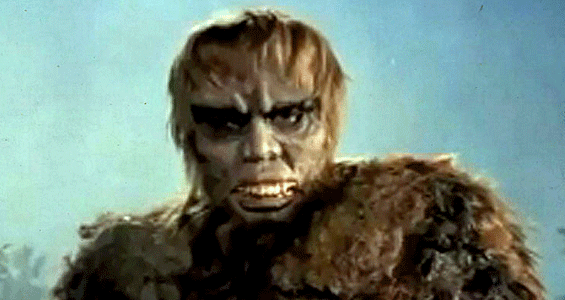 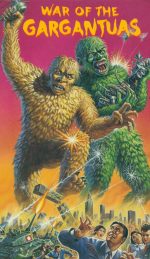 Of all the kaiju-related media I’ve ingested throughout my life, War of the Gargantuas is one of the more “Excuse me, what?”-inducing entries I’ve come across. For every weary genre trope to be found in this 1966 monster smackdown, it embraces some other element of insanity that livens things up in a flash. This is a movie that takes you from eye-rolling lows to jaw-dropping heights, peppering the proceedings with enough abject craziness to at the very least keep you wondering what direction will be the next one taken. I won’t lie and say it’s not an uneven ride, but when it comes to giving kaiju fans the destruction and bombastic brawling they crave, War of the Gargantuas doesn’t disappoint.

As if a Japanese trawler under siege by a giant octopus wasn’t enough for an opening act, a towering, caveman-like creature quickly arrives to give the sneaky cephalopod what for. The authorities can hardly believe it, but it seems that the cells left over from the death of Frankenstein Conquers the World’s eponymous beastie have spawned an all-new force of cataclysmic nature. The monster (referred to as a “Frankenstein,” so sorry, nerds) wreaks havoc throughout the country, reducing everything it touches to rubble and retreating into the sea before mankind can retaliate. Dr. Stewart (Russ Tamblyn) and his assistant Akemi (Kumi Mizuno) are baffled as to the behemoth’s behavior, for they kept watch over a baby brute who was gentle as could be for years. But little do they know that two Frankensteins are actually afoot and heading towards a final showdown, one that’ll either save humanity or seal its doom for good.

War of the Gargantuas comes to us from Ishiro Honda, who’s given the total obliteration of Tokyo more screen time than any other filmmaker. His contributions to Japanese sci-fi have been utterly invaluable, helming everything from eight out of the fifteen Showa-era Godzilla movies to cult flicks like Matango: Attack of the Mushroom People and The H-Man. War of the Gargantuas arrived in the middle of the monster madness wave Honda helped kick off, and while it feels beholden to some of the cliches that had already taken hold by then, you can tell that this wants to be a little different. Casting a pair of massive, neanderthal-ish titans as the stars is a good start, but even more unexpected is the amount of soul they’re given. Though it may not seem like much, it makes a difference to see the actors inside those ungainly creature suits exhibit more emotion than normal. As a result, the gargantuas have their own distinct personalities (one homicidal and ocean-based, one gentle and mountain-dwelling), so when one’s had enough of its brother’s carnage, there are more stakes at hand than what miniature models will next tremble at their feet.

Of course, if action aplenty is more along your style, then War of the Gargantuas has you covered. Honda gives us a number of standout sequences, ranging from the bad-tempered Frankenstein’s assault on an airport to one scene that sees him popping up from the water and snatching jets in midair. The modelwork is pretty solid, and despite the crude monster make-up, the design is still unique enough to set itself apart from the usual kaiju grind of lizards of unusual size. Not as sterling, however, are the human characters, who prove to be the picture’s biggest downside. The typical scenes of people in boardrooms droning on for ages about how to handle the creatures seem particularly endless here, thanks mostly to a pair of really ineffective protagonists. Save for deflecting blame from the gargantua they raised (“Hey, it wasn’t our monster that chucked a tank into that pagoda!”), Tamblyn and Mizuno’s scientists don’t do a whole hell of a lot to help out. Their pleas for the army to exercise caution in battling the Frankensteins are passionless, and at one point, we’re subjected to a three-minute musical number that you can’t wait to have interrupted by a jolly green giant.

War of the Gargantuas wasn’t as endearingly cheesy as some of its contemporaries (it’s no Godzilla vs. the Sea Monster), but worse excursions into the realm of HO scale sets being stomped into submission have been made. With lines like “We cannot leave here until we solve the mystery of immortal cells,” it’s difficult to muster up any genuine hatred for the flick. Imperfect as it is, War of the Gargantuas is a monster-clobbering, city-demolishing, laser-blasting fun time.

Click here to purchase War of the Gargantuas (1966) on R2 DVD from Amazon.co.uk