Directed by Takafumi Nagamine, Kekko Kamen (2004) is based upon the shōnen manga series of the same name, written and illustrated by Go Nagai. Originally conceived as a parody of Gekko Kamen (aka Moonlight Mask), Japan’s first live-action TV superhero, Go Nagai created Kekko Kamen jokingly and fully expecting the concept to be rejected by his editor due to it’s explicit subject matter. It was not!

Kekko Kamen is the story of a young innocent, and good natured girl named Mayumi Takahasi (Juri Inahara), who attends the Mangriffon Announcer Academy, a school known for it’s strict regulations where all actions are monitored via CCTV surveillance. The penalty for any student who shows disobedience or lack of respect at Mangriffon Announcer Academy is severe punishment down in the school’s basement. 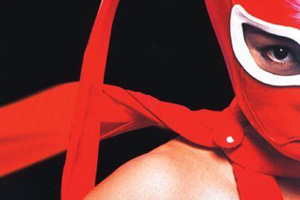 The perverted teachers at Mangriffon Announcer Academy punish the students through sexual humiliation, and unluckily for Mayumi she is falling behind in class… But just when the teachers are about to take their actions too far, a super-heroine emerges from the shadows. A  super-heroine that hides her face but bares everything else in the name of justice! A super-heroine named Kekko Kamen!

Dressed only in a red, rabbit-eared mask, scarf, gloves and boots Kekko Kamen (Shino Saito) uses her nude body to distract the teachers, fighting with grace and skill in order to protect the young Mayumi. But will her ‘crotch-first’ finishing move be enough to take down all the corrupt teachers of Mangriffon Announcer Academy? 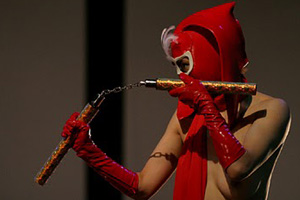 Despite it’s premise Kekko Kamen New! is not very explicit, instead opting to be light-hearted comedy with some mild nudity. Yes, there is full-frontal nudity whenever Kekko Kamen herself makes an appearance but any graphic imagery, for example Kekko Kamen’s finishing move, is obscured either by her attire (what little there is) or via computer generated effects. Overall Kekko Kamen is an entertaining movie that shouldn’t be taken too seriously!