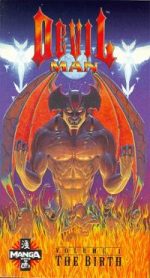 The following review will focus on the 1995 dubbed release from Manga Entertainment.

Directed by Tsutomu Iida and released in 1987 Devilman: The Birth is an original video animation (OVA) based upon the Japanese manga series (1972-1973) of the same name, written and illustrated by Go Nagai.

Devilman: The Birth focuses on Akira Fudo, a shy young man, who is often bullied due to his kind and gentle nature. With his parents missing during an excavation in the Antarctica, Akira stays with his childhood friend Miki Makimura, with whom he develops a close relationship with, and her family. After Akira gets into a confrontation with a group of low-life scum that have slaughtered all but one of the schools rabbits Miki comes to his defence. She loves Akira but is extremely frustrated with his lack of confidence.

Whilst walking home Akira and Miki are confronted by Ryo Asuka, Akira’s old friend, who demands that Akira must come with him immediately. Miki attempts to persuade Akira otherwise but is threatened by Ryo, who explains that he has something very important he needs to show Akira alone. 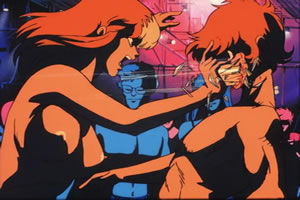 Ryo’s archaeologist father had discovered what was believed to be an artefact resembling the head of a demon during the excavation of ancient Mayan temple ruins. Only the artefact wasn’t formed by man, nor is it exactly a natural formation. This ‘artefact’ was shaped by forces very ‘unnatural’… In fact it is not an ancient artefact at all! It is the fossilised skull of a demon!

Upon wearing the demon skull the participant is provided with a view into our world’s violent past, before the evolution/creation of man, where only demons and angelic entities existed. In this world only the strongest would survive. As one demon predator would confront and kill another weaker demonic/angelic entity, the consumption of strength would be passed onto the predator mentally and, through the metamorphosis of their bodies, psychically creating unique but hideous mutations of different sizes. This world was simply the world of constant confrontation between predator and prey, where violence reigned, and ultimately the reason Ryo’s father fell into madness. He became obsessed with demons, and attempted to murder his own son, before taking his own life by setting himself ablaze in front of Ryo’s eyes. Ryo needs Akira’s assistance… 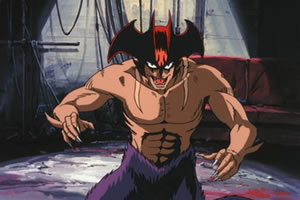 History itself suggests that demons still exist due to the unexplainable stories that populate modern society. Demons still roam our earth, and if demons can metamorphosise with other demons, then it would be possible that a demon could metamorphosise with a human. Ryo’s father discovered truth in this statement which led to his death. However if one could retain his own consciousness and suppress the demonic forces he would gain the demon’s strength! If Ryo and Akira are to survive they will need to consider this possibility. “To fight a demon, one must become a demon!”

Devilman: The Birth is the origin story of Akira Fudo’s transformation into the Devilman, a result of Akira retaining his consciousness during his metamorphosis with Amon, the Lord of War. Remaining faithful to the original source material, this hyper-violent animated OVA was the first introduction of Go Nagai’s iconic character for western audiences, although it was not the first on-screen appearance of Devilman. That accolade belongs to the equally fun, but toned down in terms of violence, 1972-1973 anime series. 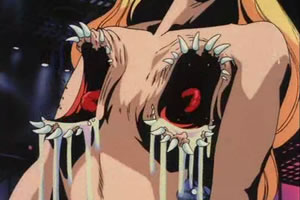 The direction by Tsutomu Iida on Devilman: The Birth was faultless, keeping the pace until the credits, and the quality of the animation remains high throughout, handling complex techniques with ease despite it’s OVA status. When released in the United Kingdom by Manga Entertainment in 1995, Devilman: The Birth was redubbed into the English language with a revised script. Now this dubbed audio track will cause a ‘love-hate’ relationship between the viewer. The soundtrack itself remains unchanged and the new acting is acceptable, but the translation from Manga Entertainment is a lot more explicit that the original audio source. I personally love the dubbed audio track from  Manga Entertainment but it won’t be to everyone’s taste.

Devilman: The Birth was followed by a direct sequel in 1990 titled Devilman: The Demon Bird, also directed by Tsutomu Iida. This sequel was also dubbed by Manga Entertainment and released in 1995. View ‘The Birth’ and ‘The Demon Bird’ together to understand why I personally consider Devilman as one of the finest examples of Japanese animation.