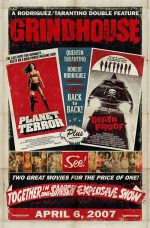 Let’s face it, B movies are just fun. It takes a high degree of fun-lovingness to not care especially about all those silly things like comprehensibility and acting. After all, those just get in the way of the fun, right? Usually, you can count on a movie below a certain level of film standards to not do especially well in the large scale. Many movies that are made at a lower budget can make a lot more profit in comparison, after all. But, even besides that, many people have a sort nostalgia and fondness for the B-movie feel, even in horror flicks.

Grindhouse:
Grindhouse was made in 2007, and it was directed by Quentin Tarantino. It actually consists of two back to back movies. The first is called “Planet Terror,” and the second is called “Death Proof.” The film even has fake movie trailers in between. Planet Terror is about a zombie outbreak, which is always a good subject for a horror B-movie, right? Death proof is about a killer who runs people over with a car instead of slashing them up with a sword. Tarantino certainly knows how to get the kitsch feel right, while success from Tarantino isn’t generally surprising, people going for such low brow movies often is.

Planet 9 from Outer Space:
This classically bad movie involves the resurrection of dead humans into zombie form by aliens from outer space. Some of the humans are turned into vampires as well. And all of this is to make sure humanity doesn’t create a “Solaranite” which is apparently a bomb powered by the sun for those of us who don’t even bother trying to understand the first thing about science. This one was made by the classic B movie director, Ed Wood. He basically just made terrible movies over and over again, so it was surprising that any of them got off the ground, really. But this movie is one that audiences just adore hating.

The Rocky Horror Picture Show:
The Rocky Horror movie is great if you want just jaw-droppingly bizarre entertainment. Very little of the movie makes the slightest bit of sense at all, and the vast majority of the plot is just an excuse for fun music numbers that are really what’s behind the film’s success. It’s unlikely anyone involved with the film expected it to take off at all, nevermind become one of the most loved horror B-movies of all time. After all, it’s pretty tricky to take a plot like “a pair of newly weds have a car problem and end up asking for a phone from Dr. Frank-N-Futrter, a transvestite from the planet Transylvania” terribly seriously. Tim Curry is just about the perfect cast for this role, as he is delightfully weird the whole time.

The B-Movie Phenomenon:
The popular B-movie phenomenon is an interesting one as it flips the concept of “bad” on its head, and allows audiences to decide if something is fun and good to watch, for totally different reasons than what is regarded as “good” normally…