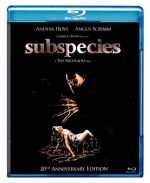 Let’s be honest, vampires have become something of a joke among horror aficionados of late. What with the horrifying (for all the wrong reasons) tween saga that’s been taking the multiplex by storm these last few years – it seems vampires just don’t have the right credibility anymore. That is until you decide to revisit Ted Nicolaou’s camp B-Movie film series – Subspecies.

Thankfully it seems these once respected VHS gems have finally been re-released by 88 Films. Funded by Charles Band’s Full Moon Films, this low budget gothic horror offering really offers a lot more on its revisit then the title might suggest. 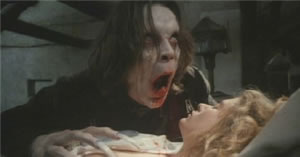 The first up from the two releases this month is the original Subspecies. Filmed on location in Romania and first released on VHS in 1991, this horror treat focuses on twisted vampire Radu and his quest for the Bloodstone (an ancient vampire relic). Also on Radu’s mind is vengeance against his vampire brother Stefan – caught in the brothers crossfire are three American students on a trip to learn about Romanian culture.

Although this is the very epitome of direct-to-video camp, it still has a firm place in my horror heart. The moment that familiar and haunting theme is played a sudden gush of those VHS memories come flooding back. With its impressive cinematography, fantastic practical effects and beautifully animated stop-motion work (from late animating legend David Allen) this is truly a treat to revisit and to have a release in the UK. 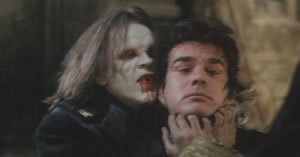 Conjuring a gothic atmosphere that Tim Burton could only ever dream of, the film might feel dated but its technical prowess (on such a small budget) continues to shine through. With Anders Hove’s portrayal of Radu we are shown a vengeful and embittered creature that also shows viewers fleeting moments of pity for his curse plight.

It’s a performance that cobbles together all of the great vampire templates from years of film. His elongated fingers are reminiscent of Max Schreck’s night-stalking Nosferatu, while his physical intensity is similar to that of Klaus Kinski’s portrayal of the count.

But even with all of these similarities Hove manages to make his vampire more frightening then the material should allow it to be. It’s the subtitle touches that really bring Radu to life – such as the grotesque why his mouth gushes with blood during speeches, all add to the film’s high points.

When the climax comes it’s as bloody and camp as anything that Hammer produced (and equally as melodramatic) – but then that’s no bad thing. With its low-budget appeal this first feature is, without a doubt, worthy of a revisit and hopefully sure to earn some new followers. 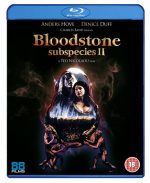 Starting from where the original left off, Bloodstone: Subspecies II really does start with a violent bang. Continuing the misadventures of Radu and his insatiable need to make Michelle (heroine of the previous film and now a vampire) his eternal bride.

Improving on its previous features failings (the slow pace and lack of action), Bloodstone ups the ante by increasing the violence and Radu’s need for greed. Once again Anders Hove adds another layer of malevolence to his portrayal of Radu as he lusts after Michelle (this time played by Denice Duff).

Much like the Puppet Master sequel (itself another Full Moon feature), Ted Nicolaou’s follow-up has everything its predecessor was missing, allowing it to be a more well rounded feature. It’s also clear that Nicolaou is more confident with his material, aware of his need to walk the fine line between camp and terror. 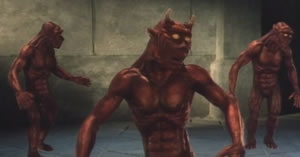 Without a doubt there is a certain charm this series of films has – quite possibly it’s because of the low budget feel and gothic look that really resonates with viewers. For this reviewer it’s down to its classic horror feel, along the lines of Universal Horror classics, its use of stop-motion effects and its satisfying gore content.

If you have yet to behold any of Full Moon’s back catalogue of VHS classics, then Subspecies is the perfect entry-level film. Sit back, relax and sink your teeth into something decidedly different. They really don’t make them like this anymore and mores the pity, but this only recommends them further. If you are bored of sniveling vampires, give Subspecies and Subspecies 2 a viewing.

Picture quality of both releases varies ever-so slightly, with Bloodstone being a little sharper and more vibrant an image. Considering both were low budget and direct to video in the early 90’s they look neither pristine nor awful.

Traces of grain are more prominent in Subspecies than its sequel, but it never hampers the overall feel of the gothic setting – rather it only adds more to it. Ultimately even with the minor faults, this is the best both of these films have ever looked and are highly recommended. 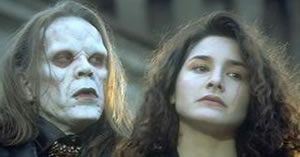 Both releases also share a handful of identical special features such as cast and crew interviews and the Full Moon Trailer Park. The real highlight for each of these releases lies within the separate audio commentaries – more specifically the detail of both productions with which Ted Nicolaou goes into. Very little is left uncovered and with the inclusion of Charles Band’s memories, it really delves into the nitty gritty of its (somewhat bizarre) production. Just with these extras alone they are recommended purchases.

The final highlight on both discs is the inclusion of the original Vidzones that where present on the original VHS. These were short making-of featurettes that Band would often introduce before detailing behind-the-scenes footage. Their inclusion is a long overdue and welcome one for Full Moon fans after a dose of 90s nostalgia.

88 Films released both Subspecies and Bloodstone: Subspecies II on Blu-ray on the 18th March 2013.