After they’re triumphant run on the previous Mario Bava releases, Arrow Video is back once again to tempt the cult film fans. This time fans are treated to an even more rare release (at least on British shores) with the strangely heartfelt story of Knightriders. The film follows a makeshift community of Renaissance performers as they struggle to earn a living, avoid despicable police officer and come to terms with their leader whose slowly starting to loose the plot. 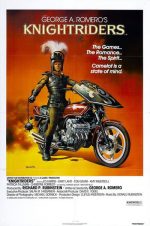 At first glance from the original poster artwork, this appears to be a medieval tournament film with a modernized twist. For years this reviewer thought it was exactly that – until, that is, the first viewing finally came. What Knightriders slowly morphs into is a deeply involved character driven piece, with emphasis on strong community and relationships bonds.

This is a different beast from Romero’s past work and its clear that he was investing his time into the characters relationships rather then to shock with gore. Whereas Romero’s work has underlying themes – such as varying forms of social commentary – present within each of them, Knightriders comes across as more heartfelt. 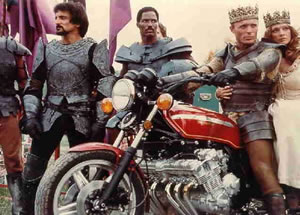 It’s quite refreshing to see Romero deviate from his previous works by avoiding the fantastical and focusing more on the conventional. Many will find it easy to see why this is such a cult film favorite between Romero’s devoted following. It very much feels almost out of character for the director if you are expecting bloody squibs and nerve shredding atmosphere.

But its not all soapbox drama though as anyone who’s seen the front cover can gather, there is motorbike jousting aplenty. Some of the stunt work is still impressive (even by more modern standards) as each jousting match adds moments of much needed energy. Legendary make-up artist Tom Savini even has a well-rounded and significantly meaty role as Morgan, a rival to Ed Harris’s King Billy.

Strangely it’s the complex friendship between Bill and Morgan who the Knightriders winning hand. There’s something almost hypnotizing about Harris performance as he manages to turn lines of (somewhat corny) dialogue into scenes of powerful emotion. 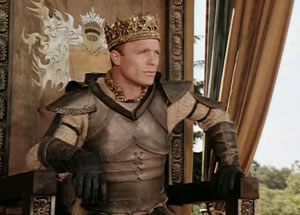 When he’s not King Billy to his loyal subjects, his interaction with Morgan feels convincing, as though they have been friends for years. When their subsequent power struggle finally takes place its wholly believable and utterly heart breaking – leaving the community split and despondent. Its quite possibly Knightriders most impressive sequence and one which shows that Romero can coordinate the best performances from his actors.

Barring Harris and Savini performances, Knightriders is littered with some really standout character moments that will linger long after the film finishes. Some of the standout moments involve everything from a subtle Marlon Brando impression during a casual drink, the little words of wisdom from Merlin (aka Brother Blue) or a character openly coming out about his sexuality to his friends.

One particular standout moment has Billy playing a harmonica by the campfire discussing how he’s going to avoid the police. Its full of little character nuances that only make one wish that Romero could make another, more character driven piece.  All of these moments are delivered without melodrama or cliché and it’s a testament to Romero’s direction, proving he is more then just a shuffling stiff in genre filmmaking. 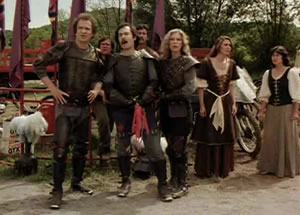 Those that have seen Romero’s previous works will recognize some of the community’s residents, all of which helps the film to have an almost familiar feel. These people are a likeable group of individuals that you genuinely care for, which makes some of the scenes all the more poignant.

On the disc front picture quality on this high-def master can vary to start with – early on it’s a little grainy in places. But then this is a rarely seen remaster of a little known film and as such this early fault can be forgiven. Overall the image is a joy to view and quickly becomes one of Arrow’s best pictures.

Once again, although not plentiful, the extras are of top quality. The commentary from Romero, Christine Romero, Savini and John Amplas is worthy of purchase alone. It’s a joy to listen to and feels like a warm embrace from some old friends – one of the discs many extra highlights.

The Genesis of a Legend is an enlightening interview with Ed Harris (to my knowledge a rarity for extra features) as he discusses the films production with fond memories. A Date With Destiny has Tom Savini wax lyrical about the production, while Medieval Maiden is a rare chance to see an interview with actress Patricia Tallman. 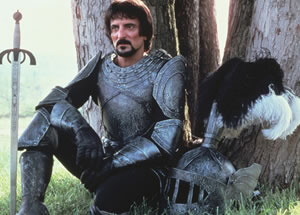 Also included are the Arrow Video familiars such as – Collectors Booklet (with notes from Brad Stevens) and reversible sleave artwork from Nat Marsh. All in all this is a worthwhile release and once which should sit pride of place on any fan of George Romero’s work.

This is a highly underrated cult feature that deserves more recognition as one of the directors more finely crafted (non-zombie) pieces. We beg you George make another film like Knightriders  – a concept that shouldn’t work – and retire the zombies. Then let Camelot become a state of mind for you as the feel sucks you in.

Arrow Video will release the BD/DVD of Knightriders on the 22nd April 2013.

AKA George A. Romero’s Knightriders