When it comes to b-movies, be it science fiction, horror or just plain weird, it’s all about the title that first brings you in, no matter what lies in store; and nothing could be more true than this marvellous slice of grindhouse kitsch released from 88 Film, Slave Girls From Beyond Infinity.

Taking Richard Connell’s  short story “The Most Dangerous Game” to outer space and sprinkling it with semi-glad hotties and rubber faced creatures, it sounds like it should be grindhouse gold, but does Ken Dixon’s film play out as well as the premise suggests it should? 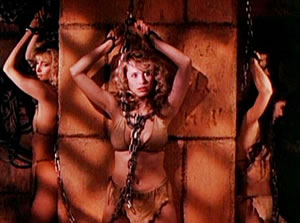 Our slice of 80’s kitsch starts off with our two lead heroines, Daria (Elizabeth Kaitan) and Tisa (Cindy Beal) chained up in their slave bikinis in some gigantic space ships for no reason, but who needs a reason when you have two space slaves in bikinis to chain them up, right? But no matter, our two scantily-glad lovelies along with their 80’s blond perms promptly escape and acquire a small spacecraft, which needs to be controlled by a special glove. Luckily this is located in the glove box, go figure. So with some chat of some nonsensical space gobbledygook and innuendo they fly off into the cosmos.

However, as they travel through the galaxy looking for a save haven, their ship is caught in some sort of tractor-beam, which causes their craft to crash into a nearby inhabited planet, where they are found and taken in as guests of the mysterious Zed (Don Scribner), who bears a frightening likeness to Christian Bale in American Psycho. Zed is also the self proclaimed greatest hunter in the galaxy, we many a trophy adorning the walls of his castle. 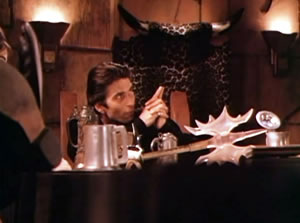 At the castle, awaiting Daria and Tisa are two other castaways from another crashed spacecraft on the planet; brother and sister, Rik (Carl Horner) and Shala (Brinke Stevens). Rik has a big knife, narf narf. Rik informs Daria that all is not what it seems and that other crew members from his downed craft have disappeared when entering Zed’s trophy room. The best thing then is not to go into Zed’s trophy room then, but that’s just me. Anyway, soon plans are afoot between Rik and Daria to find out what is going on and in Daria’s case what’s coming off.

So far so good, the story is holding together and we all sort of know what’s what. Be from here on in things go a little awry. Strange creatures start to turn up in the jungle around the castle, Tisa goes swimming which causes the house robots to bicker between themselves and final Zed’s plan starts to become apparent, which seems, as we all know is for Daris,Tisa and Shala to become Zed’s pray in his latest hunt. And during all this time the 3 ladies on the planet are only wearing underwear or slave bikinis for no apparent reason, but we’re not complaining. 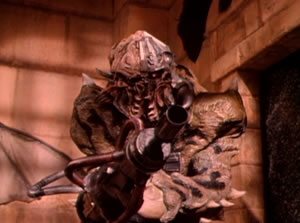 With the hunt underway the oddness increases even more and this just adds to the fun of the film. A phantom zone is discovered; monsters with laser guns run amuck, zombies coming out of nowhere and Daris turning up in a gladiator outfit, all of this in the final third of the film, lovely.

So “how bad it’s good” is the film? Well bad is the wrong word for Slave Girls From Beyond Infinity, I would say “how tongue in cheek kitsch it’s good” is this film. All the players do their part to add to the oddities that occur during the film, especially Elizabeth Kaitan, who plays her role with some gusto, even if the acting is like an over eager amateur dramatics goer. However, the same can not be said for her partner in-crime Cindy Beal, where in some scenes the scenery is less cardboard than her delivery. Though the scene stealer for me is Don Scribner’s Zed, if only for the spooky likeness of Christian Bale’s character from American Psycho, yes he produces enough ham to keep Subway going for years but that’s what you want from a villain in such a film. 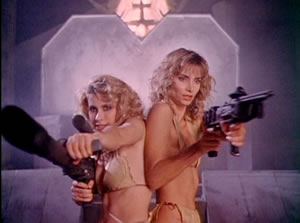 So for me, this film has what you want from a slice of b-movie grindhouse fun, babes, bonkers & baddies. Yes, it’s light and has about as much depth as a puddle, but it does try to do something with a well trodden story such as “The Most Dangerous Game”, if only to set in a new location and throw girls in underwear and bikinis at it, but at least it tries.

88 Films fill the release loads of great stuff and present the disc in a great grindhouse style sleeve. On the disc you’ll find the following: