Directed by Bob Clark, written by Alan Ormsby and released in 1974, Dead of Night is as haunting as it is unsettling.

Inspired by the W.W. Jacobs short story The Monkey’s Paw, in which a family are granted three wishes and use one of them to resurrect their dead son, Dead of Night takes the zombie sub-genre and expands upon the established mythos. 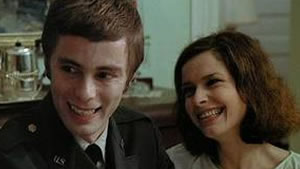 Taking place during the Vietnam Conflict, Dead of Night makes no hesitation during the opening scene at setting the tone that will remain for the entire duration of the feature; one of sadness. U.S. soldier Andy Brooks (Richard Backus) is shot in the chest by a sniper and hits the ground hard in agony. Through the sound of gunfire he hears his mother’s voice calling out to him. “Andy, you’ll come back, you’ve got to. You promised.” Mortally wounded and with no chance of survival Andy lays there semi-conscious, closing his eyes and slowly taking his last breath.

Back in the United States Andy’s family receive notice of his tragic death in combat. Knocked down by the tragic news of Andy’s death his father, Charles (John Marley), and sister, Cathy (Anya Ormsby), grieve the loss of their son and brother respectively. Whilst trying to make sense of their emotions Andy’s mother, Christine (Lynn Carlin), refuses to believe her beloved Andy won’t be coming home and becomes consumed with prayer, hoping, wishing that Andy will return home… 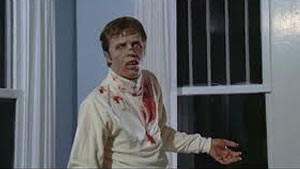 Hours later Andy arrives at the front door, apparently unharmed…but not as his family and friends remember him!

Dead of Night (released as Deathdream in the United States) aspires to be more than simply a horror movie. By pushing the boundaries of the genre Bob Clark and Alan Ormsby have created a powerful anti-war protest and a compellingly depressing middle-class family drama. The statement is clear; soldiers returning from the horrors of conflict don’t return as the same person. Andy’s return and his subsequent characteristics are a metaphor for the difficulty many veterans have once they return to civilian life.

Supported by the realistic characterisations of a family that has been torn apart by conflict, Dead of Night is utterly uncompromising throughout. The relationships between each member of the Brooks family is a great achievement from an amazing cast. Bob Clark’s use of shadows and night-for-night filming also add to the tense atmosphere, amplified by Carl Zittrer’s unnerving musical score. It is also notable that Dead of Night was the debut feature of special make-up effects artist Tom Savini. Savini’s work in Dead of Night is visually outstanding and unflinching in it’s depiction of Andy’s decaying body, displaying early promise for the maestro’s later work. 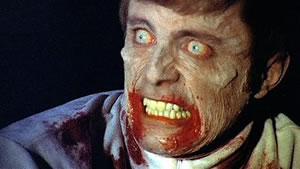 Dead of Night, the second collaboration between Bob Clark and Alan Ormsby after their previous film Children Shouldn’t Play with Dead Things (1972), provides a steady amount of suspense and tension that continues to build up to its powerfully honest finale. Well-crafted, focused and engaging throughout, this atmospheric 1970’s horror has an undeniable presence which makes Dead of Night an effective and important social satire on the implications of war and family life.