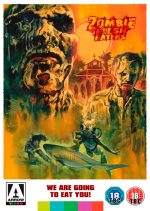 After what has felt like an eternity for cult film fans in Britain, Lucio Fulci’s seminal horror film, Zombie Flesh Eaters (1979) is finally released uncut. Of all the titles to have been on the DPP banned list, Fulci’s visceral opus is the film that instantly springs to the minds of horror fans as Video Nasty is mentioned. This in turn has led to its notoriety becoming something of a horror rite of passage for entry level, cult film enthusiasts.

While far from perfect, Zombie Flesh Eaters (aka Zombi 2, Zombie) is still a wonderfully dirty little horror gem. This is probably Fulci’s most easily entertaining horror feature, long before he became obsessed with the mind bending and migraine inducing narrative headaches (found in some of his later efforts). Although light on any substantial narrative (no social commentary here), Fulci’s zombie feature excels in almost every other area.

This is truly the Grand Guignol of zombie horror films, with very little since, that manages to hit the bloody (and brutally nihilistic) standard of violence seen on display here. Even after repeat viewings it’s clear that this literally goes for the jugular every time. Fulci has – along with Spaghetti-splatter cinematographer, Sergio Salavti – crafted grotesque and terrifying sights.

And what ghoulish sights they are, thanks to the genuinely frightening and vile looking make-up of the legendary Gino De Rossi. These zombies are the stuff of stomach churning nightmares and it is clear these creations have since, gone on to inspire contemporary horror filmmakers. 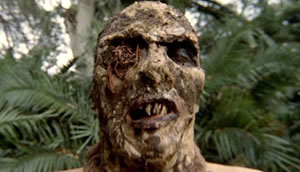 It’s a testament to De Rossi’s superior eye for detail; such as the maggot filled eyes and the rotting look of decomposing flesh seen on the zombies, that always instantly spring to mind. While each bloody gunshot impacts with a powerfully aggressive force not seen in most horror of this caliber. Oh Gino, what wonderful splatter memories you have created.

The second is by far an eye water spectacle, involving an agonizing zombie attack. Even if the effects have dated somewhat, the ‘eye-splinter’ sequence is still a tension filled (and most excruciating) exercise in tortuous horror. Like all of Fulci’s violence, the camera lingers on the shot as a violent voyeur.

Both of these sequences demonstrate Fulci’s almost perverse shooting nature towards his violence. He allows it to permeate the viewer’s consciousness, which in turn promotes genuine terror. Its as though it revels in the viewers discomfort as the act are painfully realised on screen. 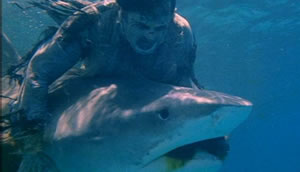 This is one film that genuinely deserves its cult horror status. Sure it’s corny with acting stiffer then some of the corpses walking around the film, but then that’s half the fun of Fulci’s gore-fest. It carries with it an undeniable charm that can only be found in European horror, most notably Spaghetti-splatter. Why does a film need to have brains on the inside, when its quite clear they are spilling out all over the screen in each of the crazed frames?

Whether you are new to horror, or a fan of the great Fulci, this feature is a must for all fans of the macabre.  For once this is a cult classic that is worthy of the title and should be on the film shelf of all good horror aficionado’s, this will not disappoint.

Now before the extras are even mentioned, kudos should be given to Arrow Video and their restoration team. The picture quality for this Blu-Ray release is, by far, the best Zombie Flesh Eaters has ever looked. Visually it’s a scrumptious delight of bright and bloody gunshots, as well as detailed textures.

It’s so eye wateringly beautiful to look at in face, that the only thing stopped one from crying tears of joy, are the moments of vomit inducing bloodshed. But then that’s no bad thing, particularly as fans believe this to be Fulci’s masterpiece of terror. 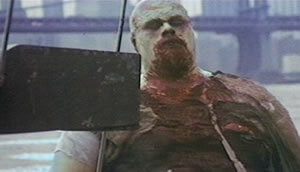 As it has been re-mastered from an original 35mm print, its great to see a healthy grain present (when viewed on closer inspection), which allows it to retain a more organic and less artificial look on the transfer. This is quite honestly, Arrow’s best release for sometime. It’s a wondrous treat for fans of this cult classic and possibly the best they have ever seen the film look. Arrow has clearly lavished both love and attention on this release (and it really does show).

Once again Arrow has gone to town on some great (in-house) special features that pack out the most extensive release of Zombie Flesh Eaters yet. First up fans and newcomers alike have the opportunity to view the film in a multitude of ways. These range from choosing either the original Italian dub of the film, English Mono or brand new and restored English translation for the Italian audio.

There is also the opportunity to see the film with each of its various opening titles at the start of the presentation.  Whether you’re a fan or not, this is a minor (but no less) welcome treat, the devil is in the detail they say. Fans are also given the chance to see a rare intro to the film from star Ian McCulloch (also of Contamination and Zombie Holocaust).

The real meat (or flesh if you rather) lies in the robust featurettes. This starts with; Aliens, Cannibals and Zombies, star Ian McCulloch reminisces about his Italian horror career.

From Romero To Rome: The Rise And Fall Of The Italian Zombie Film is an in-depth look at the legacy left behind from some of the classic genre pieces. Everyone from critic Kim Newman, screenwriter Antonio Tentori, through to directors; Luigi Cozzi and Ruggero Deodato, share memories of their favorite zombie horror features. 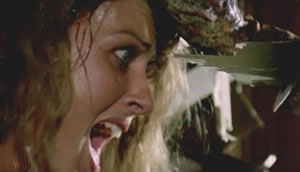 Next up are the featurettes, The Meat Munching Movies Of Gino De Rossi and Zombie Flesh Eaters- From Script To Screen. The former focuses on the gore-maestro’s back catalogue of effects work and props. While the latter has Fulci collaborator and friend, Dardano Sacchetti showing original script pages to the film (originally titled: Island Of The Living Dead).

The package is rounded off with a collection of Trailers and TV spots, most of which hold a kitsch appeal and become essential viewing. While a collectors booklet finishes off this lovingly crafted work of horror trash, containing brand new pieces of writing. As is always the case with these booklets, they contain a plethora of educated info to indulge in, becoming a worthy addition to an already fully loaded release.

Arrow has excelled their selves with this release; everything about it is catered for fans both old and new. And as already mentioned, this is the best Zombie Flesh Eaters has ever looked on any release. The care and time that has gone into this release is evident from when the disc is first popped into the player. This is a must own release and one which should, nay needs to sit proudly on a film shelf. Its quite simply, horrifically wonderful.