INTRODUCTION:
Is Godzilla truly the King of the Monsters?

Tokusatsu – A Japanese term that applies to any live-action production that makes considerable use of special effects. 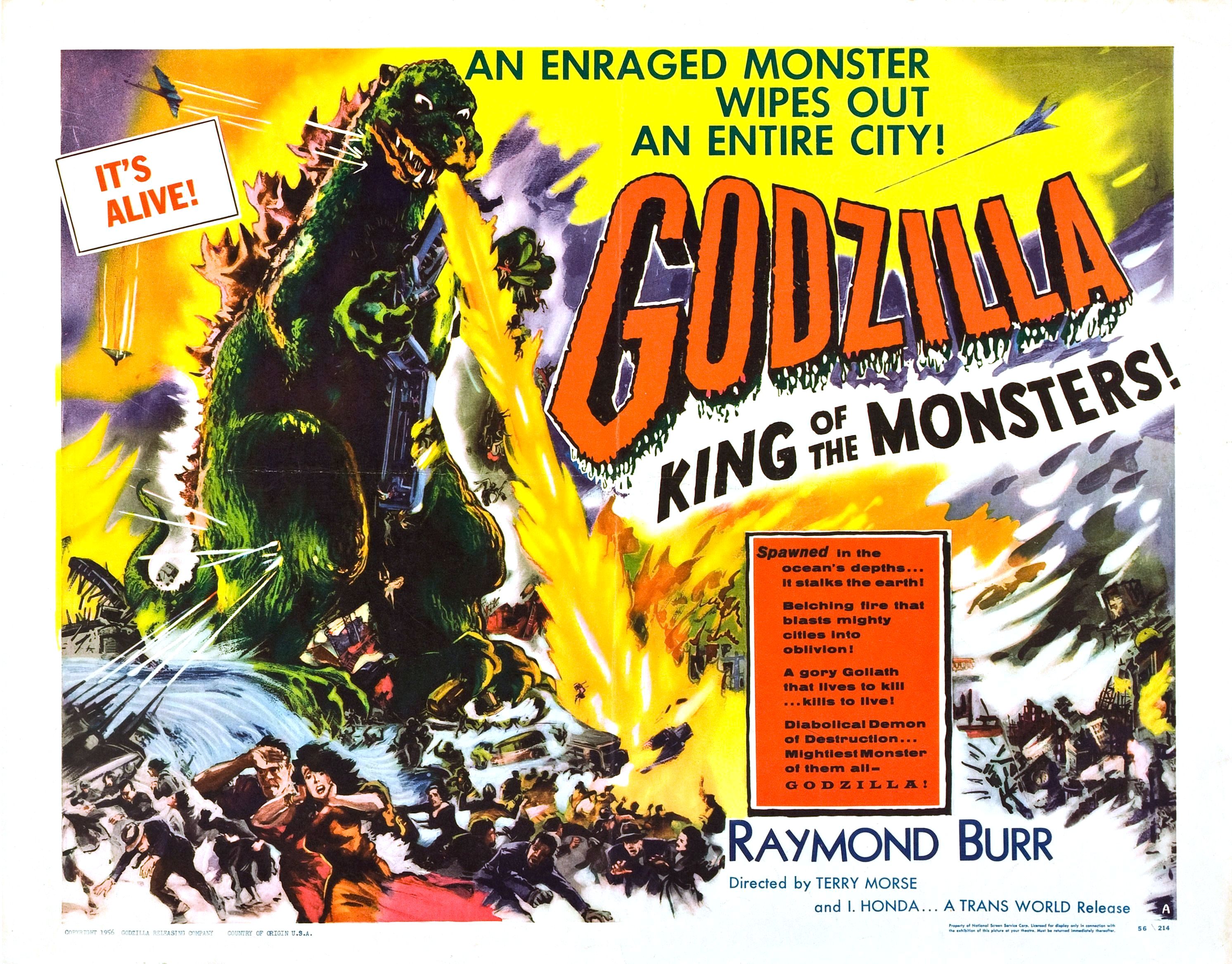 Arguably one of their most vital post war recoveries was that of their film industry and by 1953, the industry had entered its Golden Age. Names like Ozu Yasujiro and Kurosawa Akira stood above all and their films from this period remain among the greatest films ever made. By 1954 Godzilla was released into the theatres by the Toho Company and has been followed by an outstanding amount of Japanese science fiction to this day.

During this Golden Age of Japanese cinema a lot of films produced symbolised the effects of the WWII on Japanese society. Godzilla itself was one of the most influential because it didn’t directly use the subject matter, instead using the themes of war and indeed nuclear war as subtext.

To gain a much more informed understanding I have looked upon texts from an academic viewpoint and studied the general fandom of Godzilla, it’s many sequels and their spin offs. I have made comparisons between the critical opinions of those interested in perhaps the Toho Company’s most iconic film.

There is no doubt that the film has left a lasting impression upon those who have seen it, whether it’s viewed in it’s original release or the U.S. edited counterpart, but why have audiences embraced Godzilla and allowed the film to inspire it’s own sub genre?

From both an eastern and western perspective I believe Godzilla is fear. It’s a fear that has manifested itself into Godzilla by way of its symbolism.

The symbolism in Godzilla is both strong at times as it is subtle. I had picked up on certain signs and signifiers during my initial and subsequent viewing of Godzilla, whether they be intentional or accidental, and I wanted to explore those aspects further. But first I needed to know what the general opinion of the film was… Did anyone else pick up on Godzilla’s strong symbolism? Did you either find the film itself to be nothing more than low budget science fiction B-movie fare, or did you see it as a historical landmark in Japanese cinema?

During the 2004 North American re-release of Godzilla film critic Roger Ebert had wrote in the Chicago Sun-Times: “Godzilla at times looks uncannily like a man in a lizard suit, stomping on cardboard sets, as indeed he was, and did”, but it’s more than just a tale of science fiction… Godzilla is a byproduct of the atomic age and for all it’s reptile slapping and city stomping ways the film does in fact have some kind of subtext that goes beyond the bad acting associated with the science fiction films of that era and if Godzilla was stripped of all it’s flaws the film would be a complete image of the frame of mind Japan had taken on post WWII. A mind subconsciously full of fear.

“In the guise of a typical Hollywood style monster movie, they made Japan, and ultimately the world, experience the bombings of Hiroshima and Nagasaki all over again.” (John Rocco Roberto, 1997)

During the first film in the series Godzilla was the ultimate threat to Japan, “a bipedal atomic warhead with a score to settle and not an iota of compassion or mercy”, but to fully understand Godzilla in this light you need to know the history behind the atomic bombings of Hiroshima and Nagasaki. 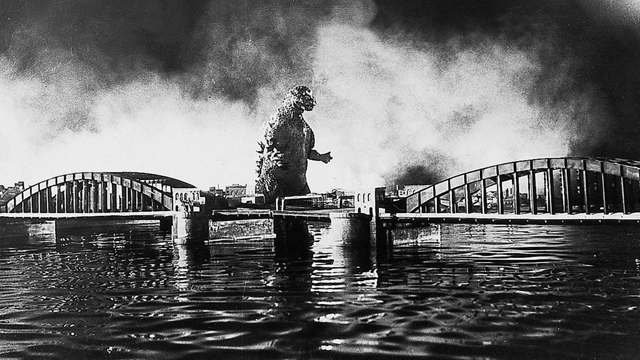 THE ATOMIC BOMBINGS OF HIROSHIMA AND NAGASAKI:
“This is our cry. This is our prayer. Peace on Earth.”

On July 26th 1945 a statement entitled the Potsdam Declaration was issued for the surrender of the Japanese Empire by United Kingdom Prime Minister Winston Churchill, United States President Harry S. Truman and the President of the Republic of China Chiang Kai-shek. The terms agreed upon at the Potsdam Conference warned that if Japan did not surrender then it would face “prompt and utter destruction”.

By the end of 1945 as many as 140,000 people had died in Hiroshima and 80,000 in Nagasaki as a result of the atomic bombing. These to date have been the only attacks to use nuclear warfare in the history of humanity to such a extent. These bombings led post-war Japan to adopt Three Non-Nuclear Principles, forbidding the Japanese nation from nuclear armament. 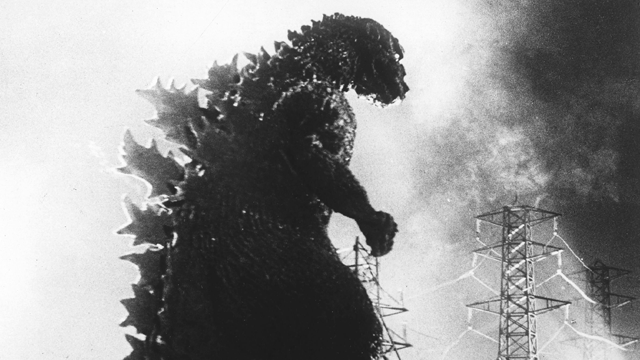 GODZILLA:
An embodyment of the tokusatsu genre.

Gojira (or Godzilla) was directed and co-written by Ishiro Honda and produced and distributed by the Toho Company Ltd and sets a grim tone throughout it’s 98 minute running time. Without a doubt the most important line in the film comes at the end as Dr. Yamane (portrayed by Takashi Shimura) ponders “If we keep on conducting nuclear tests, it’s possible that Godzilla might appear somewhere in the world, again”.

Godzilla eventually found it’s way into the hearts of the western world in 1956 when it was re-edited for American audiences by Jewell Enterprises under the new title Godzilla, King of the Monsters! This new edit of the film consisted of new scenes featuring Raymond Burr inserted into an edited version of the Japanese original. Careful attention was paid in the creation of the new scenes to match the visual tone of the original but while much of the plot and symbolism remained true to it’s Japanese counterpart it seemed something was lost in the American adaptation. This is true of the new edit’s closing line “The menace was gone, so was a great man. But the whole world could wake up and live again”.

Gamera is a 1965 daikaiju eiga about a giant turtle awakened by the accidental detonation of an atomic bomb and is similar in nature to the more popular Godzilla series. One notable difference however occurs during the film when Gamera saves a boy from death after destroying a lighthouse. From this the boy realises that Gamera is not really destructive, but is a misunderstood creature out of place in our world. This concept would eventually be repeated in many kaiju films (including Godzilla) in the years that followed. The film also received similar treatment to that of Godzilla when in 1966 it was heavily re-edited from it’s original Japanese release for American audiences with the new title Gammera, The Invincible!

Gamera doesn’t have the same underlying fears that Godzilla contained and although the film features the accidental detonation of an atomic bomb, no real connection is provided other than merely awakening the beast, leaving the film without the same impact that Godzilla had 11 years before.