“Ladies and gentlemen: in view of the controversy already aroused, the producers of this film wish to re-emphasise what is already stated in the film – that there is no established scientific connection between mongolism and psychotic or criminal behaviour” – the very serious announcement that opens Twisted Nerve.

Film making twins John and Roy Boulting are best known for their satires of the late 50s and early 60s: Private’s Progress, I’m All Right, Jack, etc. This psycho thriller is a bit of a departure for the pair. John produces and Roy directs: like their comedy The Family Way from a couple of years earlier it’s a vehicle for Roy’s future wife Hayley Mills, and as in that film she stars alongside a young, startlingly beautiful Hywel Bennett (he looks a bit like a sexy owl). In The Family Way they played an innocent young married couple unable to consummate their marriage because of Bennett’s sexual hang-ups. Martin, the character he plays in Twisted Nerve, has sexual hang-ups of his own, and they’re a lot more dangerous. Twisted Nerve’s one of a trio of British films (the others being Goodbye Gemini and Straight On Till Morning, both from 1970) that make up a very specific little subgenre: stories about pretty blond boy-men with murderous 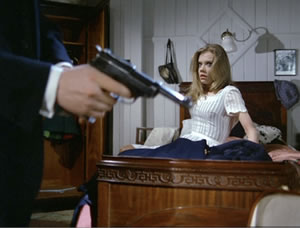 tendencies. They’re all direct descendants of Psycho and Peeping Tom, but it’s in Twisted Nerve the lineage is most obvious: Peeping Tom’s writer Leo Marks co-wrote the Twisted Nerve screenplay with Roy Boulting (Mills and Bennett’s relationship in Twisted Nerve’s vaguely reminiscent of Carl Boehm and Anna Massey’s in the older film), and like Psycho it’s got an unforgettable score by Bernard Herrmann. In fact, Herrmann’s haunting, whistled theme is far better known than the film itself, having been given a new lease of life by Quentin Tarantino’s use of it in Kill Bill. It turns up here in several variations, including a wonderfully silly party version and a slowed down, oddly circus-like version used for the film’s denouement. 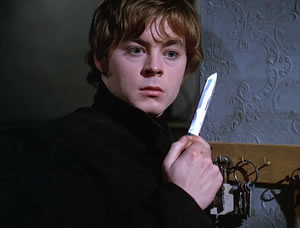 Aside from the music, the best thing about the film is Bennett’s remarkable performance. Martin’s a spoilt, indolent rich kid who nonetheless is haunted by the fate of his older brother, placed in an institution by their mother (Phyllis Calvert), unable to cope with (but mostly just embarrassed by) his Down’s Syndrome (or ‘mongolism’, in the now rather awkward 60s terminology). When we first see him, visiting his brother, he seems like a perfectly ordinary young man. Next time we meet him, he’s disconcertingly different. He’s invented another persona, the childlike ‘simpleton’ Georgie, which he uses to charm library assistant Susan (Hayley Mills), and, when his exasperated stepfather’s had enough and chucks him out (which eventually Martin takes bloody revenge for), to inveigle his way into her home. Bennett is convincingly innocent as Georgie, and his sudden switches to snarling, dangerous Martin are truly chilling. The split personality angle’s heavy-handedly underlined by his tendency to strip off and fondle himself in front of a mirror. There’s a stack of musclemen magazines nearby to act as a casually homophobic signal that he’s a bit odd sexually. 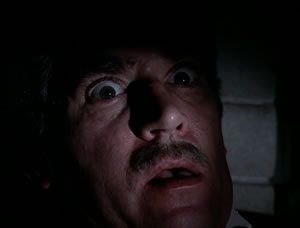 Susan’s the only person Martin shows any sexual interest toward though – although her slightly tarty mother Joan (Billie Whitelaw) meets a sticky end after a clumsy attempt at seducing him. The sight of Susan helping to dress a clearly aroused Martin, secure in the belief he’s completely unsexual, is the film’s queasiest moment, but dodgy as the premise of someone pretending to be learning disabled might seem, the main problem with the film is that it’s not offensive enough. It’s far too restrained and genteel, and despite its obvious channelling of Hitchcock (most bizarrely when, in an echo of the ending of Psycho, Hywel Bennett starts speaking in the badly dubbed voice of Phyllis Calvert ) it’s seriously lacking in suspense. Interestingly, as well as echoing one Hitchcock film, Twisted Nerve foreshadows another: Barry Foster’s Gerry, Joan’s lodger/lover, is an only slightly more benign version of Bob Rusk, the jolly psycho he plays in Frenzy. Gerry works for a film distributor (presumably based in Soho), and is a type you can sense Twisted Nerve’s makers looking down their noses at: “If you want me to sell your crummy films, you’ve gotta give it a dose of the old S&V – sex and violence! Cartoon, ice cream, the old S&V, and everyone’s happy.” If Gerry had been involved with the making of Twisted Nerve it probably wouldn’t look or sound as good, and it certainly wouldn’t have such a top-drawer cast. But I can’t help thinking it would have been a lot more lively.