Of all the films to come out of the Cyber-Punk subgenre of the late 80s early 90s, Shinya Tsukamoto’s Tetsuo: Iron Man could be considered the founding father of this often over looked genre. Released in 1989, this was in fact Tsukamoto’s third feature film (along with several short features during the late 70s and early 80s).

Tsukamoto’s first full-length feature (released in 1976) was titled Cloudy (aka Donten), but little information is known about this. While his second feature (Hasu no Hana Tobe released in 1979) has also been little seen. It’s with Tetsuo: Iron Man that Tsukamoto really made his presence aware to western audiences. 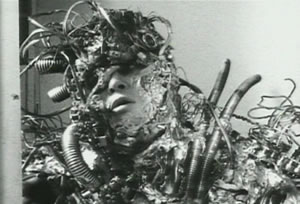 The story, for what little makes sense in this slight 67-minute feature, concerns a normal business worker (known only as Man in the film) who, while driving with is girlfriend, hits a man walking across the street (played by director Tsukamoto). To try and cover up their hit and run accident, both decide to dump the body into a nearby river. But the gentleman they have run over is no ordinary man; he is the Metal Fetishist (who earlier in the film can be seen shoving a metal pipe into a leg wound). The Man’s encounter with the Metal Fetishist leads him to start a bodily metamorphosis, as he slowly becomes more then a man of flesh and bone.

What follows is a Cyber-Punk nightmare to give even David Cronenberg the creeps. With the first Tetsuo, Tsukamoto crafted an audio-visual assault to subdue the cinematic senses. Even now (some 24 years on) Tetsuo: Iron Man still feels like a breath of fresh air. The different filmic styles used, such as the large use of stop-motion for the later half of the film, still astounds on a fantastical level. 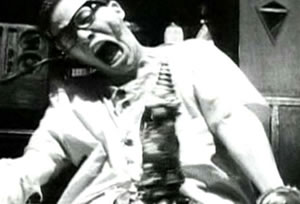 Tetsuo is a truly unique and special film as it contains enough moments to shock and astound. The gradual metamorphose of the man is both painful and shocking, with enough moments to rival even the most brutal of body horrors. Particular moments that still stand out include the shards of metal protruding from various personal areas, just the idea of a foreign presence within ones own body is a terrifying thought. This is also echoed in the moment when his penis becomes a giant phallic drill (on which his girlfriend is later impaled on), itself also feels like a sequence ripped straight from a violent anime.

Its clear that with Tetsuo: Iron Man, Tsukamoto wanted to push the Cyber-Punk stylings in a more extreme direction and he succeeded. The sound design is also an integral part of Tetsuo, as it relies on the use of industrial sound effects and the manipulation of metallic objects. The soundscape really goes into full force once the man has a face off with the mutated businesswoman. Her frenzied attack on the helpless man is an audio experience to make the hairs on the back of ones neck stand on end. The very vibrations from the soundtrack manage disturb and thrill in equal measure. 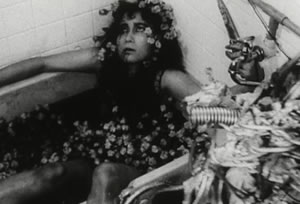 The final battle has moments that are reminiscent of some of the most titanic Tokusatsu grudge matches, as both the Metal Fetishist and the Man face off in their newly developed, metallic personas. This low budget feature shows itself to be an accomplished piece of b-movie art from its visuals (its 16mm Black & White is still visually striking) through to its aforementioned soundscapes and unique stop-motion effects.

Tetsuo: Iron Man is (on its most basic level) a sensory overload of an experience, but on repeat viewings it becomes an even richer cinematic experiment. Tsukamoto’s features always begin with a dream-like quality, but they almost always descend into uncontrollable nightmares for the protagonists (during their physical or emotional journey).

I’ve not even scratched the surface of this metallic feature, but I urge you take this wild ride.

Tsukamoto’s next film (released in 1991) was to be even more extreme but strangely underrated, experience.