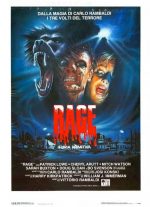 Directed by Vittorio Rambaldi and written by Umberto Lenzi (under the pseudonym Harry Kirkpatrick), Primal Rage (1988) is an Italian / American splatter film shot on location in Florida.

In an effort to restore the dead brain tissue of a baboon, Dr. Ethridge (Bo Svenson), a professor at an unnamed University in Florida, inadvertently creates a deadly contagion. Unaware that the virus could be dangerous Dr. Ethridge continues his research. However when young college journalist Frank Duffy (Mitch Watson) suspects that the campus laboratory is conducting inhumane experiments on live animals he breaks in to get photographic evidence. As Duffy attempts to take a few snaps of the caged animals he is bitten by one of the infected baboons, which then escapes outside into the street, and is quickly run down by a Florida Police Department squad car in grotesque fashion. 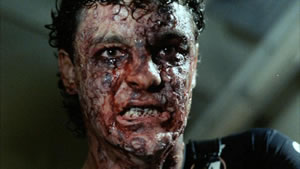 It’s not long before the bite on Duffy’s arm becomes infected and he begins to develop influenza-like symptoms. Sam Nash (Patrick Lowe), Duffy’s friend and colleague, becomes concerned and decides to invite Duffy out on a double date with his girlfriend Lauren Daly (Cheryl Arutt) and her room-mate (Sarah Buxton). The night starts off great, and despite a seemingly minor confrontation with three belligerent students, ends well with Duffy sharing a kiss with Debbie…and then proceeding to playfully bite her neck.

The virus soon spreads to Debbie causing her to feel fatigued. Duffy’s arm starts to form ugly looking sores from the infected bite and his symptoms worsen. Admitting himself into the hospital a uncontrollable rage takes over and Duffy’s starts to attack the other patients and staff before running out into the street on a killing spree. 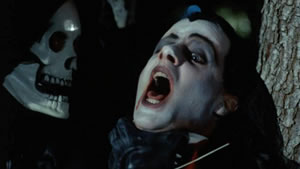 This is the least of Dr. Ethridge problems, who at this time is still unaware of the deadly contagion’s side-effects. Debbie is soon abducted by the trio who confronted the group earlier and it turns out that they are aggressive would-be rapists.

With his debut as director Vittorio Rambaldi, son of special effects maestro Carlo Rambaldi, has managed to create an entertaining film that, despite it’s slow set-up, delivers a lot of the crimson red you would expect from 1980’s Italian horror cinema. The special make-up effects and gore, courtesy of Carlo Rambaldi (known for his incredible work on Steven Spielberg’s E.T. the Extra-Terrestrial in 1982) and Alex Rambaldi, are the highlight of Primal Rage, especially during the final act when the infected muscle-headed trio attend a campus Halloween party. 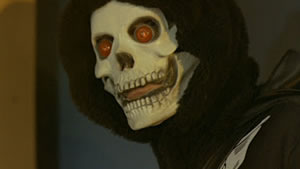 Primal Rage isn’t perfect however, and Vittorio Rambaldi’s direction can at times be underwhelming and uninspired. Bo Svenson is also not on his usual top form as Dr. Etheridge and sleepwalks through most of his scenes. Primal Rage also feels very dated, despite being filmed during the tail-end of the 1980’s, thanks to the power pop ballads that punctuate the soundtrack. Thankfully Claudio Simonetti’s score is used just as frequently.

Primal Rage may feel dated and flawed today but the ingeniously bizarre special effects on display help elevate this movie above most Italian exploitation films of the same era.