“Crime is the disease. Meet the cure.”

“In America, there’s a burglary every 11 seconds…an armed robbery every 65 seconds…a violent crime every 25 seconds…a murder every 24 minutes…and 250 rapes a day.“

When a hostage situation arises in a Downtown Los Angeles supermarket, and all negotiations fail, the Los Angeles Police Department contact police officer Marion Cobretti, codenamed “Cobra” (Stallone). From a division of the L.A.P.D. known as the “Zombie Squad” Cobretti is ruthless and unpredictable, playing by his own set of rules. “Cobra” does the job nobody wants.

Inside the large form grocery store the shotgun-wielding gunman prepares to unleash another round of blasts upon it’s defenceless customers. Armed with a 9mm Colt Gold Cup, Cobretti sneaks into the supermarket, stopping only to drink a refreshing can of Coors Original (!?), and confronts the assailant. When the gunman declares that he has a bomb and won’t hesitate to kill everyone inside, Cobretti coldly responds “Go ahead…I don’t shop here.” 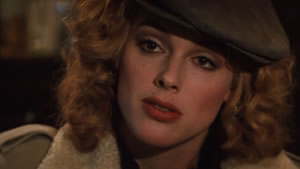 The gunman then attempts to take a shot at Cobretti, but not before “Cobra” throws three inches of cold steel into his sternum and then six rounds from his 9mm Colt into the criminal’s chest. Fatally wounded the gunman dies, but not before mumbling of a New World Order: a group of Neo Fascists who believe in killing the weak and leaving only the strongest to join their ranks. Their leader, known only to the authorities as the mentally unhinged “Night Slasher” (Brian Thompson), is a deranged serial killer who appears to kill anyone he likes at random with no witnesses. So when young model Ingrid Knutsen (Brigitte Nielsen) witnesses the ruthless murder of an innocent and escapes the death clutch of the cult Cobretti is brought in to protect her…

The action in George P. Cosmatos’ Cobra is both engaging, and at times, quite tense. Stallone is convincing as the “Cobra” and composer Sylvester Levay has created a phenomenal score which adds to the dark, brooding imagery from cinematographer Ric Waite. That is not to say Cobra is by any means a great action film… It is not. In fact Cobra can be quite humorous in certain scenes that aren’t intended to be comedic. These scenes however give Cobra a modern appeal, with dialogue like “The court is civilized, isn’t it…pig?” “But I’m not… This is where the law stops, and I start…sucker!”, and it is why Cobra is highly regarded as a cult classic.

If you want a serious film that takes a look at serious issues then George P. Cosmatos’ Cobra is not what you are looking for. If you are looking for nostalgic over-the-top action, a high body count and insane one-liners however then look no further!