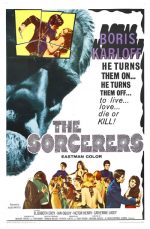 The discotheques, dolly birds and double deckers of 1960s London have become some of British cinema’s most easily lampooned clichés (see the Austin Powers films if you need proof). In the heady few years mid-decade when England’s capital was the most exciting Place in the world it quickly became the most obvious place to set a film in the world. Swinging London became a convenient backdrop for various genres: art cinema (Blowup), comedy (Smashing Time), crime caper (Kaleidoscope) and spy drama (Arabesque). In this short series I’m going to be revisiting a small but fascinating series of 60s and 70s horror films set in contemporary London that give us a glimpse of a darker, sleazier side to the Swinging City. Less swinging, more (to use a not very 60s word) minging. Let’s start off with a look at the second (and penultimate) film directed by tragic boy wonder Michael Reeves. 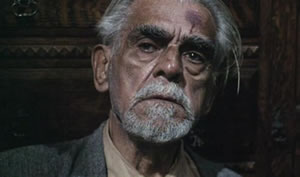 It’s not unusual for a marriage to disintegrate from loving companionship into bitter battle of wills, but in The Sorcerers it happens both more quickly and more literally than usual. The film revolves around a trio of characters, linked in an ingenious way: Marcus and Estelle Monserrat are an elderly couple living a meagre existence in a dingy flat that seems a world away from the nightspots haunted by handsome swinging Londoner Mike (Reeves’ regular hero Ian Ogilvy) – although the film’s low budget means the nightclub setting seems scarcely less grotty than the Monserrats’ home. Marcus (a perfectly shabby, weary-looking Boris Karloff, seeming nothing like a Hollywood star on a visit home) is a medical hypnotist whose claims of his lasting fame are belied by his need to advertise in a poky local newsagent’s. Estelle (Catherine Lacey) is a loving companion who has patiently gone without as Marcus spent a fortune on building a bizarre machine in their spare room. Marcus’ quest for a subject to try his mysterious apparatus out on brings him into contact with jaded, thrill seeking Mike. Their late night meeting in a Wimpy bar (one of a series of joyous period bits, including a stack of Nova magazines and Cliff Richard’s “In the Country” on the radio) seems like an uneasy pick-up – “I could offer you an unusual evening,” Marcus promises, “some extraordinary experiences” – but Mike’s game enough to go along with it. 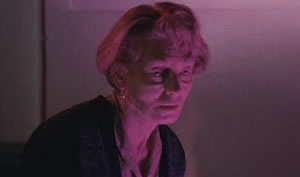 Marcus and Estelle hook Mike up to the machine, and several minutes of strange noises and a very 1967 light show later, they’re able both to control his actions and feel every sensation he does. Idealistic Marcus has conceived this as a way of allowing old people a new lease of life by letting them share the experiences of the young – and the couple’s initial excitement is rather sweet: the first thing they do is send Mike swimming. But a quick dip isn’t enough, for Estelle at least. Marcus shares the viewer’s horror as it emerges that far from the sweet little old lady she first appeared, Estelle is a monster. To my mind at least Estelle is one of the most frightening characters in any horror film: because she’s one of the most believable. Seemingly kind and gentle, as soon as she’s offered the opportunity to do anything she likes without consequence she seizes it with both hands, gleefully making Mike steal, viciously attack his friend Alan, and finally murder two girls (including an

extremely young Susan George). There’s an uneasy message in all this to us, the audience, sat here experiencing all this violence on screen with no threat to ourselves. 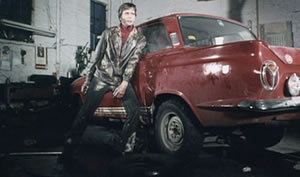 Having been denied pleasure for so many years, Estelle’s impulses easily override Marcus’s more benign ones, and he helplessly finds her gaining complete control of Mike. Catherine Lacey’s performance is just incredible: her transformation from meek housewife to blood-crazed harpy is horribly convincing (the highlight perhaps being her queasily post-coital sigh of “that was the best yet” after she forces Mike to beat up Alan). And for me at least poor, good-natured, bewildered Marcus is one of the finest performances of Karloff’s career. It’s a real achievement of Reeves and his actors that The Sorcerers’ most compelling scenes consist of two old people talking.

If there’s one thing central to swinging London films it’s youth. Older people might turn up as local colour in the form of Irene Handl or Arthur Mullard but they’re rarely more than caricatures. This is what makes The Sorcerers startling even now: it’s one of the few films of the era that addresses the feelings of old people left behind by a society geared to the desires of the young. The film’s view of the older generation is stark and unsentimental, but it acknowledges that they’re people with desires as noble or as depraved as those of the young.

Ivan Kirby lives in Brighton and has been fascinated with horror since his childhood encounter with the Fighting Fantasy gamebook House of Hell. He’s also indecently obsessed with all manner of peculiar things from the 60s and 70s, despite not actually being alive then. You can read more of his barely coherent thoughts on such things here: http://jumblesalefrenzy.wordpress.com/.