You can blame John Carpenter’s Halloween (but don’t blame the man himself) for the slew of events themed slashers that come, wave after wave before the dust had even settled. Everything from Birthdays through to Christmas has been used within a slasher context. Is there anything that hasn’t been put through the slasher grinder?

One of the many low budget copycats that appeared in the 80s slasher sub-genre, was the little known and seen Slaughter High (originally titled April Fool’s Day before Paramount got there first). This British take on the high school slasher is actually one of the genuinely craziest of the subgenre. Everything about this film is bad; the lighting is awful, the actors (apart from Caroline Munro) are atrocious as their accents jump from British to American. Even the main theme feels like a humorous take on the repetitive synthesizer music that became popular with the slasher genre (which coincidently is performed by Friday The 13th composer Harry Manfredini). 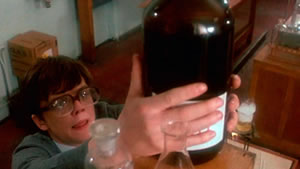 Slaughter High is one of those rare cult oddities; it is a cheap little slasher that underneath all of its bad accents and obvious British locations still manages to have a little horror charm. Incidentally charm can go a long way sometimes and thankfully this is the case with Slaughter High. It feels as thought it’s almost designed for all those horror fans that love trashy filmmaking. Make no mistake this film is most certainly trashy, but like other lesser known slashes this feature has developed a group of devoted cult followers (myself include in the bunch). Its just perfect Friday night beer and pizza entertainment, nothing anymore sophisticated as that.

School nerd Marty is constantly picked on and made to feel worthless. His class mates have little respect for him and one day decide to play the ultimate prank by rigging one of his lab experiments. Unfortunately it goes horribly wrong (like all bad pranks do) and Marty is burned by a precariously placed bottle of acid, scarring his geeky features. Several years later those who orchestrated the prank are invited back to the school, but all is not what it seems as each one is picked off by a crazed killer with a court jesters mask. 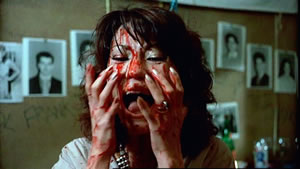 Although Slaughter High is really just a cash-in on the other popular slashers of the early to mid 80s such (Friday the 13th, Prom Night,etc) it does have its own unique and disturbing charm. Even some of the deaths, although darkly funny are in fact quite inventive. The kills are the highlight of any slasher feature. There is no exception with Slaughter High as it contains inventive gags involving an stomach churning can of acid beer, a sex sequence which reaches a more ‘electrifying’ climax then most found within the genre and an interesting confrontation with a lawnmower. This film really does have some greatly likeable moments, which if you have yet to see it may become some of your favorites in a slasher film (although its hard to beat the Beehive death in Sleepaway Camp).

This is one slasher that clearly wears its low budget roots with pride as it becomes painfully obvious to any viewer that it’s a British film set in England. Everything from the aforementioned bad American accents through to the locations make it all harder to really take this film seriously. But then that is the beauty of this cult gem, it’s a massive guilty pleasure which subsequently gets better with each viewing. Its not a lost classic but it is one of the most enjoyably silly slashers that’s been forgotten. One thing that does stick out about the history of Slaughter High is the death of actor Simon Scuddamore (who played Marty) before the films release. He’s probably one of the best horror antagonists from the 80s and one wonders what might have become of him due to the cult following of this film. 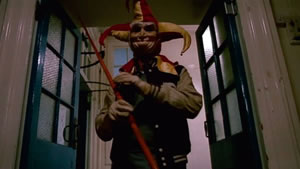 One thing is for certain though; if you have a hidden passion for the bad slashers (those in the vein of Sleepaway Camp series or Silent Night Deadly Night), it means it’s worth a watch. Those horror fans that are after something a bit more mainstream will do well to grab a viewing of this. It is just one of those horror films from the 80s which stays with you, mainly because its so darn bad. But then it’s always good to have something a little bad for you, from time to time. Go on; indulge in some bad film horror in the only way the 80s could.