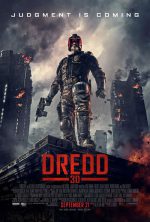 Finally, after what has felt like an eternity in post-production, Dredd (or rather Dredd 3D) has landed with a violent thud in the multiplex. But is it a worthy, nay better successor to the original 1995 Sylvester Stallone feature. Well the answer is a resounding ‘yes’, as Dredd is everything the original should have been, its gritty, violent and not for the easily offended. In a word it’s the best adaptation of the iconic British comic character; it’s not perfect but its damn close.

Thematically Dredd is essentially the same as Garth Even’s The Raid (possibly this year’s best action film), but that detail doesn’t stop it from being anything short of entertaining. Now although The Raid was released earlier this year, Dredd was in fact made before it. Although both are the same film both are equally interesting in their own right. While The Raid has some supremely jaw dropping fight chorography and set pieces, Dredd has plenty of its own highlights. 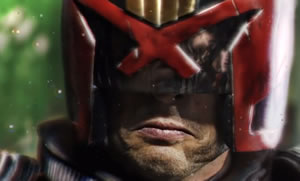 For starters actor Karl Urban manages to carve out a distinctly faithful characterization of Dredd (with the help of Alex Garland’s impressively retro action script). This is a Dredd that keeps his helmet on, never smiles and feels no emotion. Everything about his interpretation is spot on to how fans of the square jawed future cop imagine him to behave. If you’re a fan of 2000AD and of John Wagner’s Judge Dredd, you will relish Urban’s performance.

While many complained (including fans) of the look of Dredd’s ill-fitting iconic helmet, they can rest assure that it works perfectly in motion. While it may bother those who are used to a slightly small helmet, it serves its purpose well. But the main reason to see Dredd (if you ignore any fashion faux paux’s) is the level of over the top violence only seen in 80s action flicks.

In Dredd we have enough fast paced set pieces to quench the thirst of even the most hardened action movie junkies. When the bullets hit, they hit with a resounding force that causes flesh to tear and limbs to fly. Each impact has a sense of gravitas and pain, heads explode, limbs are broken, faces are smashed and Dredd takes out the perps. This is the violence that was missing from the original feature, and with the drug Slow-Mo each set piece is seen as beautifully realized violence. 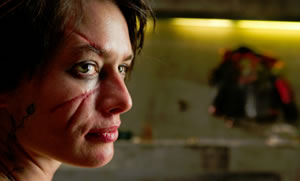 Although this is a trim Dredd (just the bare essentials which could be down to budget constraints) it still manages to pack a hefty punch to the face. This is the Dredd fans of 2000AD (and I) grew up with, but with all the thematic sensibilities of some of the best 80s action features all given a modern twist.

But its not perfect, much like The Raid (quite at the back) this too has a flabby mid-section which feels a little uneven with the pace of the rest of the film. Again this could possibly be down to budget issues or editing, but something felt odd about its pacing. Also the inclusion of 4 disposable Judges erred too far into un-needed cannon fodder.

The low budget of Dredd is also clear within the opening few moments, Mega City One (when not contained to slum blocks or inside) has a distinct feeling of war torn South Africa (much like District 9 did in parts). While not a huge problem it does distract from the opening car chase somewhat, but this is the only moment that really causes any viewing distractions. And while Olivia Thrilby looks the part of Judge Anderson, she does at times become rather starry eyed and rather distant to begin with. But her psychic abilities and violent nature finally surface mid-way. At best she is a functional character to Dredd’s no-nonsense attitude. 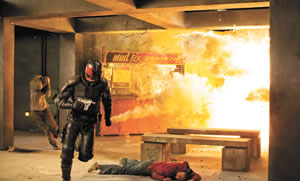 In Lena Headey‘s Ma-Ma we get to see a different character interpretation for once. With her scarred features and cold-blooded ways, Ma-Ma is a fearsome antagonist. Is she a match for Dredd? Close, she certainly has the intellect and raw aggression of an overlord, but something feels lacking. But she has the saving grace of feeling unpredictable at times with her serpentine looks and violent attitude.

One rather interesting high point of Dredd is the marvelous John Carpenter-esque soundtrack by Paul-Leonard Morgan. Morgan manages to channel a sense of Assault On Precinct 13 with elements of Escape From New York. Each musical arrangement works perfectly for each sequence and like any good film score, becomes a character in itself, almost as though it’s the vocalizations of the Peach Trees tower block, a jaded hard bitten curmudgeon.

But the most surprising element is, in fact the 3D. A genuine shock appeared over my face as the violence and superbly shot cinematography unfolded across my vision. While many believe 3D is a pointless exercise in money making (myself included), Dredd really delivered the goods, much to my amazement. This was particularly evident during the Slow-Mo sequences.

Dredd is a welcome addition to this year’s comic film line up (and now a personal favorite), harking back to the gory glory days of the 80s action films churned out by Cannon and Golan Globus. It won’t break the mold in terms of exceptional filmmaking, but it most certainly will be respected as a well-made adaptation of Dredd’s character.