Considered by many Italian film fans, to be the great Italian horror (1997’s The Wax Mask by Sergio Silvetti is neither great nor a well made horror), Dellamorte Dellamore is part Evil Dead and part unhinged whimsicalness via Terry Gilliam. Directed by Argento protégé Michele Soavi, this last great Italian horror is based on the cult Dylan Dog comics by author Tiziano Sclavi.

For those unaware of either the source material or this feature (which itself differs slightly from Sclavi’s work), the story focuses on gravedigger Francesco Dellamorte and his mute companion Gnaghi. Working in the fictional Buffalora Cemetery is not an easy time for Francesco, as nightly he has to deal with (what he calls) ‘Returners’. These are dead bodies that have come back to life seven days after death. It is down to Francesco to dispatch these fiends before they escape into the community. 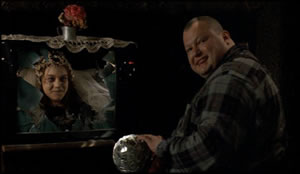 Like all the best Italian genre pictures of the 70s and 80s golden era, Soavi’s adaptation of Sclavi’s writings is full to bursting with style, powerful imagery and enough substance to warrant re-watches. Everything about this feature speaks volumes of Sovai’s still behind the camera, for instance just look at the opening sequence full of darkly comic humor and violence. Sovai manages to infuse Francesco Dellamorte’s (Everett) character with both humor and nonchalance within the first moments.

As a fan of all things Italian cinema, Dellamorte Dellamore is also a personal favorite, which continues to get better with each viewing. All of which is down to several of its fantastic genre element (more on that soon) and to its director (the criminally under appreciated Michel Soavi) and star (a never bettered droll performance from British thespian Rupert Everett). Where to start with this wondrous piece of genre cinema? 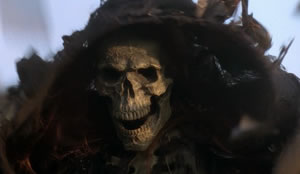 Structurally Soavi throw’s some truly inspired elements into the mix, what could have be a bog standard comic piece rifting off Evil Dead’s insane energy, is in fact a horror film with thought provoking instances. As the title suggests its about love and death, all of which is echoed in every sequence. The balance between fear, insanity, violence, whimsy and heartbreak is never compromised.

Visually it is possibly better looking then even some of Dario Argento’s or Lucio Fulci’s best features. The look of the Returner’s is based around how they died to begin with, which makes for some interesting make-up choices. One that particularly sticks out is the biker, his face and helmet full of debris from the fatal collision (witnessed earlier in the film).

Other visually striking images that occur include; Death manifesting itself from burned book pages as Francesco stares on. The image is reminiscent of Gilliam’s work on his own angel of death in Baron Munchausen. The unsubtle use of angel wings, found behind She as Francesco has sex with her, on her husbands grave, is again other of the many connotations found within Dellamorte Dellamore.

Each element functions as a whole within the story, and like some of the best Giallo features, will leave you guessing to the very end. Towards the mid-way point one starts to question whether this is all really in Francesco’s head or is it a perpetual nightmare that will continue on and on for him and Gnaghi. The fact that he has to be constantly tortured with the image of his murdered beloved, ever present in various women is enough to drive anyone insane. And this adds another layer to its dream like narrative and makes the viewer constantly question what is actually happening. 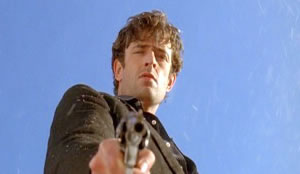 Almost every sequence in the film is perfectly done, each shot containing its own set of symbolic images to tease one’s mind. The films end leaves one with a sense of surrealism, which is usually found within the features of Alejandro Jodorowsky. One such surrealistic moment can be found during Francesco’s plea to have his doctor amputate his phallus (as it is reviled that Francesco’s impotency is a turn on for She). It’s terrifyingly bizarre sequence and seeing Francesco in stirrups as penetrates him with a giant syringe, is enough to make even the toughest cinema fan tremble.

As a director Soavi has a great understanding of genre conventions. With Dellamorte Dellamore he skillfully mixes them into a melting pot of originality that makes one pine for more of his uniquely spirited features. Take Stage Fright or even The Church for example, two features that had both the style and the substance of some of the best elements of Italian genre cinema. Applying his skills learnt on those features, Sovai manages to produce a piece of horror cinema that is still respected by fans now.