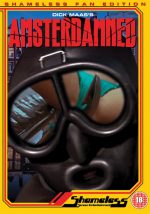 Today Shameless Screen Entertainment have released their Amsterdamned trailer, which is being released coming this October.

There is a serial killer at bay in Amsterdam’s canal network and the race is on to stop him before mass hysteria grips the nation.

Dick Maas’s cult slasher movie starts as it means to go on when the predator leaves the protective habitat of the dark canal to claim his first victim before dragging her back into a watery grave.

So check out the new trailer now below:

Stay tuned with us here at Attack From Planet B on all things Shameless and we hope to give a review of their new release, Amsterdamned as soon as we can.