Originally intended as a sequel to George A. Romero’s Dawn of the Dead (1978), as the film’s Italian title Zombi 2 would suggest (Zombi was the title given to Dawn of the Dead upon it’s international release), Lucio Fulci’s Zombie Flesh Eaters (aka Zombie) (1979) is an uncompromising, illogically scripted, fantastical display of outstanding zombie flesh munching!

After an officer of the New York Harbor Patrol is murdered on an yacht, initially thought to be abandoned, by a decomposing flesh eater Peter West (Ian McCulloch) is assigned the job of reporting on the incident by his news editor (Lucio Fulci in a trademark cameo appearance). Upon taking his investigation to the abandoned yacht Peter meets Anne Bowles (Tisa Farrow), a young woman questioned by the police earlier after it was discovered that the yacht belonged to her missing father (the uncredited Ugo Bologna). In the hopes of finding anything that would bring her closer to discovering her father’s last known whereabouts Anne and Peter decide to investigate together. 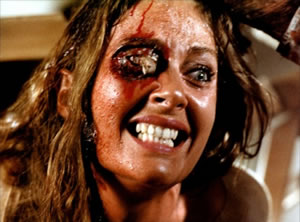 Upon discovering a note from Anne’s father revealing his location on the island of Matool, and the revelation that he is suffering from some form of disease and now fears for his life, Anne and Peter decide to travel to tropics in the hope that they may find this island, and thus Anne’s father.

Once in the tropics they enlist the help of Brian Hull (Pier Luigi Conti) and Susan Barrett (Auretta Gay), a young couple who eventually agree (with the assistance of money) to help Peter and Anne reach the island of Matool despite the rumours they have heard that the island is cursed and they should try to steer clear. Unfortunately for the group the rumours will reveal themselves to be true, for Matool is indeed a cursed island and as Anne and Peter will soon discover it’s a location where the dead rise to attack the living. 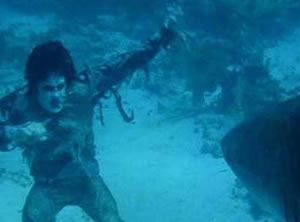 With Zombie Flesh Eaters Lucio Fulci had achieved international acclaim and notoriety but the film’s incredible popularity had unfortunately brought it the unwanted attention of the concerned public and the censors after it was released uncut on video (despite cuts to the cinematic release enforced by the British Board of Film Classification) in the United Kingdom. Subsequently it was branded as a ‘video nasty’ by the media and banned as a result of the 1984 Video Recordings Act. It wasn’t until 1992 that the film was re-rated and allowed distribution in the United Kingdom and 2005 for the film to be finally released fully uncut once again.

Despite the film’s turbulent history with the censors Lucio Fulci’s Zombi 2 has consistently been renowned as a classic of the genre due to it’s excessive gore content and inventive make-up effects from Giannetto De Rossi. This is Fulci at his outrageously exploitative best and just as Dawn of the Dead could be considered Romero’s masterpiece, Zombie Flesh Eaters is Lucio Fulci’s tour de force! A slow paced but literally eye-popping experience (pun intended) that is highly recommended to any fan of exploitation cinema.